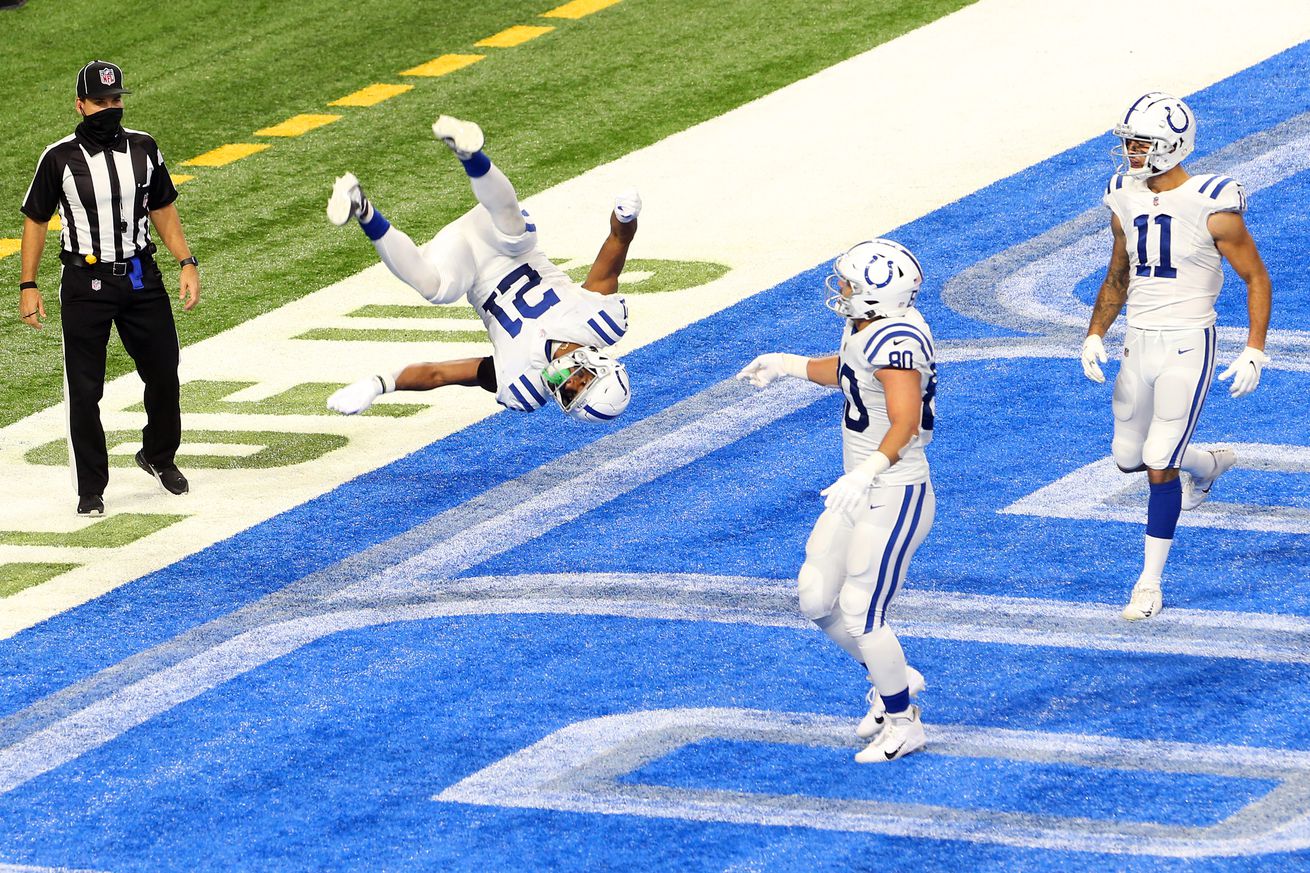 It’s a good day when your offense scores a touchdown on half of their drives. It’s an even better day when the defense chips one in as well.

The first quarter play calling was conservative, with only 2 pass attempts over 5 yards. Add in an anemic run game and you get 3 stalled drives. After that, the pass game opened up and the Colts managed 5 TDs on the next 6 drives.

The 5th best points per drive (Adj PPD) was supported by the 6th best Drive Success Rate (DSR). The Colts offense put up the 9th best EPA/ply. That is much better than the season totals where those stats are 16th, 15th and 15th.

Through 8 weeks it is pretty clear that the offense, on the whole, has been just average (below).

Rivers put up the 4th most efficient QB performance of the week, with a 0.48 EPA per dropback. A similarly high Passing Success Rate (55.6%, 5th) was driven by the 7th highest first down conversion rate (1st/db 41.7%) and the 6th highest net yards per dropback (ny/db 6.9). Those rankings aren’t much different from season totals (6th, 10th, 7th, 2nd).

Take that with a grain of salt though as 5 of those opponents rank in the bottom 10 of passing defenses (by EPA/db against).

Rushing wasn’t great in standard stats (22nd ypc, 16th 1st/c), but that tends to happen when you have a multi-score lead and you are grinding clock. When you adjust those numbers by game situation, the effort rises to a 10th best weighted Rushing Success Rate.

Similar story on the year, where game script adjusted wRSR is 16th but all other metrics rank much lower. Opponent defenses have been better against the rush than the pass, but that still is not an impressive effort.

This was the 2nd week of a strong offense primarily due to Rivers’ arm. As the passing game has opened up, rushing has seen some improved numbers. In the first 4 games wRSR was 29.2% and epa/c was -0.18 compared to the last 3 game totals of 38.4% and -0.02. It’s still not good but it is getting better.

Week 9 will be, by far, the toughest matchup yet for the as the Baltimore Ravens 5th ranked defense (DVOA) comes to Lucas Oil stadium. They are the stingiest squad in points, giving up only 1.35 points per drive (#1) and 16.9 offensive points per game (#1).

Football Outsiders ranks their pass defense 8th by DVOA and I have them 7th by EPA per dropback against, so no disagreement there. It’s a steep mountain to climb for an almost 39 year old Philip Rivers.

On the ground, the Ravens run defense is #1 in DVOA. I have them as #2 in wRSR so again great minds think alike. This does not bode well for a run game that has seen little success against much easier defenses.

Vegas opened with Baltimore having a 2.5 point edge and my model forecasts 2.8, so I can’t really disagree.