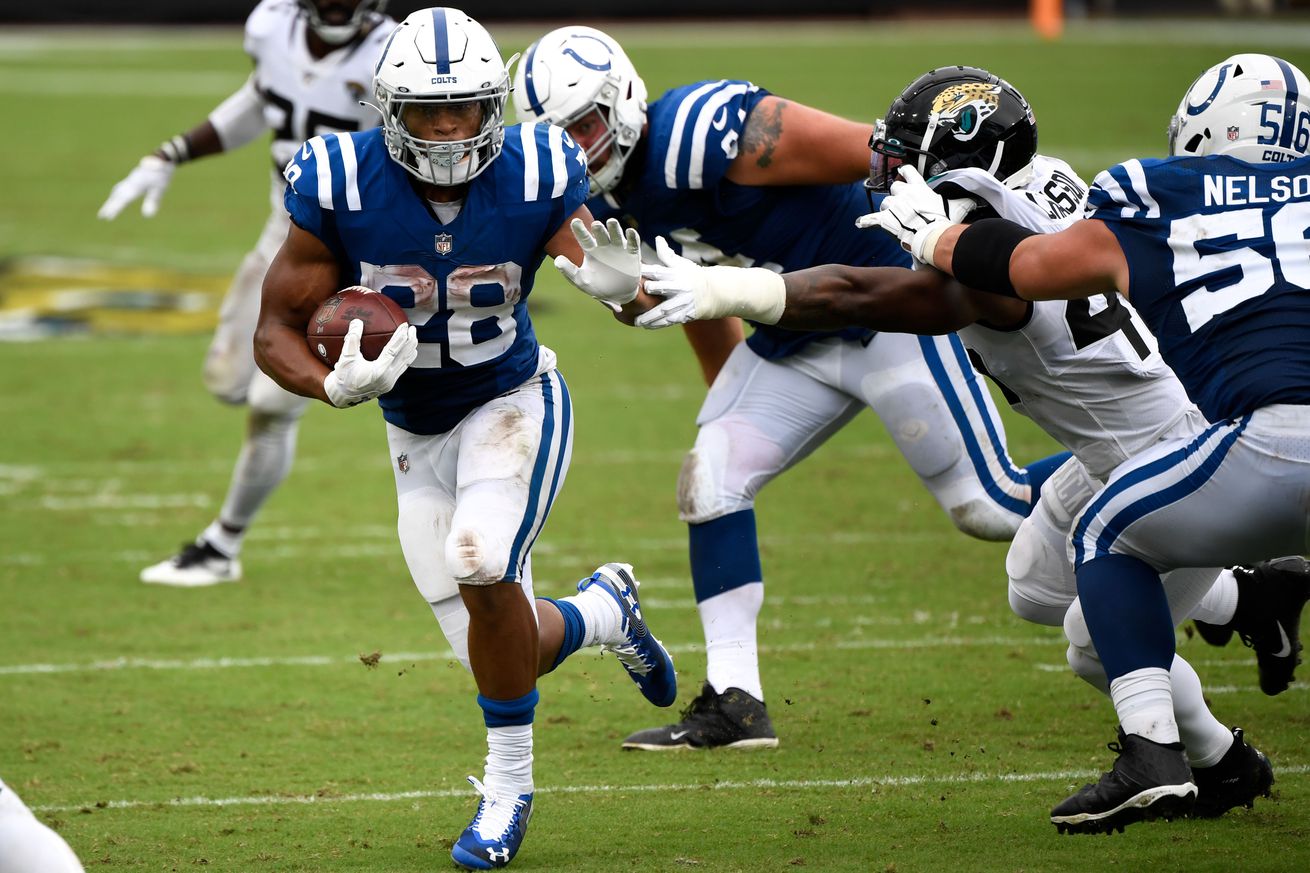 As I watched The Colts offense Sunday, I saw a team who both seemed to move the ball at will and also one that was determined to make plays to keep points off the board. When I crunched the numbers I saw the same thing.

The Colts only had 9 drives and 2 of them ended with interceptions, which is tough to recover from. However, on the other 7 drives, the offense moved the ball into scoring position every time and was within the red zone on 6 of them.

Out of 34 series, the Colts earned 25 first downs and 2 TDs, which is a 79.4% Drive Success Rate (DSR). That mark is better than 14 of their games in 2019 (wk 3 ATL 90.6%, wk 16 CAR 83.3%). I get that the interceptions are really bad, but outside of those 2 plays, the offense was consistently moving the chains.
The 2.2 Points per Drive (PPD) is better than the 1.9 average from 2019, but 20 points a game isn’t going to cut it. The expected points based on DSR, starting field position and average yards per series was 26.1 which means the Colts left a lot of points on the field. For anyone who watched the game that falls into the “well, duh” category, but I thought I would just show you that the stats see that too.

It’s disappointing that the Colts offense put up the 3rd highest total yards of any team and only managed the 19th most points, but that is what happens when you turn the ball over 2 times. . . . well, really 4 times . . . 5 if you count missed field goals.

The per play efficiency was OK (10th DSR, 15th EPA/ply), but the success rates were not as good, with a weighted Total Success Rate (wTSR) at 17th and a 16th ranked 1st down conversion (1st/ply). That tells me, that we relied on explosive plays and penalties to keep drives moving, which is great as long as it is repeatable.

Some people will not be able to look past Philip Rivers’ 2 picks (almost 3) and that’s fair: picks are killers. However, if you look at his other 44 dropbacks, he did well overall. Even with the 2 picks, he managed a 0.21 EPA/ply which was the 11th highest of any QB. The Jacoby Brissett play dragged the team measure down to 0.16, but that is still above average and far better than the 22nd place finish in 2019.
The passing success rate (PSR) was good with 25 plays out of 48 dropbacks (52.1%) adding positive value. In 2019, that mark was was 42.3% and ranked 21st.
With 4 explosive pass plays and only 1 sack, the net yards per dropback (NY/db) was an 8th ranked 7.5. However, the % of passes resulting in first downs (1st/db) was not good (35.4%, 19th). With our lead running back out for the season, that is something that Rivers will have to improve upon.
The Colts averaged short passes, with a 21st ranked average depth of target (aDOT) and a 25th ranked air yards before the catch (YBC). Short passing in and of itself is not necessarily a bad thing as long as it is accompanied by a high completion rate (Cmp%) and high yards after the catch (YAC). Overall, the Colts did both, ranking 5th and 10th respectively, but those are historically not sustainable numbers and so longer passes will be required for season success.

The issue with the passing game wasn’t so much the overall numbers, but rather that it started out strong and then faded.

You can see the EPA efficiency drop quarter by quarter, which is also reflected in the yards per attempt (YPA) and the yards per completion (Y/Cmp).

The first half drives were good but the 3rd quarter average air yards before the catch (YBC) was actually negative. In the 4th qtr, even though the completion % over expected (cpoe) was positive, it just wasn’t high enough to overcome the minimal YBC and YAC.

The first pass of the second half came on a 4th & 1, when Rivers threw 14 yards downfield to Jack Doyle for a 28 yard completion. For the next 24 minutes, the Colts completed only 1 pass that was thrown further than 5 yards. That’s just not winning football.

Again, at the game level the numbers were an improvement over last year and there was enough production on Sunday to put up more points than they did, but going forward, Rivers has to reel in the picks and throw farther in the second half.

Rushing efficiency was much lower than last season. 19th and 25th in weighted and unweighted rushing success rate (wRSR, RSR) is a far cry from the 12th and 3rd place averages from 2019.
Going 0 for 3 on 3rd/4th down tries didn’t help much and that is reflected in the 26th place EPA per carry (EPA/c) number.

Despite the loss and the ugliness of the 2nd half, this was an overall better offensive performance than the average game from 2019. From a glass is half full perspective, I saw a lot of things I liked. If we can fix the mistakes, there is a lot of potential there. Football Outsiders ranked the Colts offense 15th on the week by DVOA. That feels about right to me. Take away a few mistakes and that is easily top 10.

Next week, the Colts host the Minnesota Vikings, who are coming off a loss to the Packers. Aaron Rodgers showed no mercy on the Vikings defense, so take it with a grain of salt when I say that my data ranks Minnesota 28th against the pass.

Similarly, I show their rushing defense dead last in 32nd place giving up 4.9 yards per carry and 11 first downs on 32 rushes. If Frank Reich really wants to be a top 5 rushing team, this might be his chance.

Of course, 1 data point is neither a trend nor an average, so I wouldn’t put too much weight in my rankings right now, but as of this writing the Colts are a 3 point favorite.