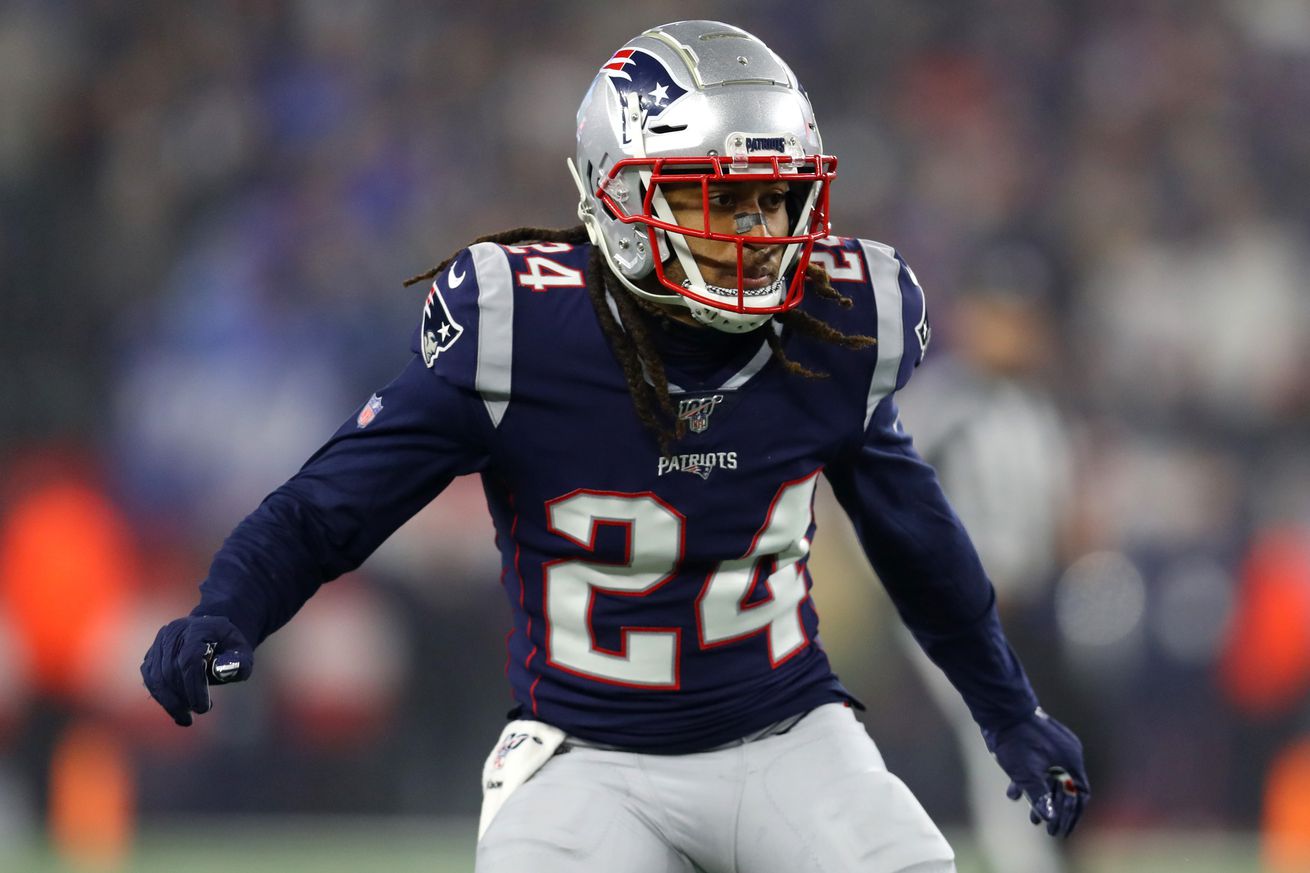 Author’s Note: Yes, you read that headline properly, but it should be noted that this is purely a theory and that I’m NOT trying to start any rumours.

The New England Patriots are in cap hell. They have less than two million dollars left in cap space, have a full draft class (worth 9M) to sign and they need a few million left over for in season moves and practice squad players. With the Patriots only having 1.7M and needing around 12.7M going into the season, it’s fair to say that they are 11M dollars short. If they sign Joe Thuney to a backloaded contract (and lower his cap hit from his franchise tag), that could save them a few million dollars and get them in the 4-5M dollar range in terms of remaining cap space, but it’s still not enough.

In terms of cap savings, the 5 players on the Patriots (not counting Joe Thuney who is clearly not going to be cut) who would save them the most money if cut are the following:

Of those five players, you can eliminate Cannon right away since he’s an important member of their offensive line. You can probably rule out Sanu since they traded a 2nd round pick for him last season, so they clearly value him very highly. I would also cross off James White, whose value as a pass catching running back (159 catches in the last two seasons) will be crucial for the next quarterback of the Patriots. That leaves Lawrence Guy and Dont’a Hightower and he’s why I think neither of them will be cut; Guy has been a very impactful player for the Patriots over the last 2 seasons, easily playing over 50% of the snaps and is great against the run. The 4M cap savings price tag just isn’t worth it for the Patriots. As for Hightower, it’s clear his best years are behind him as he just turned 30 and has been a machine for the Patriots, averaging 53 snaps a game (around 75% of the team’s total snaps) for the last 8 seasons. He is one of the leaders of the defense and if they cut him, that would leave the Patriots with virtually no talent at linebacker and would make Ju’Whuan Bentley as the best player in the group, which would make them the worst linebacker unit in the league. I just can’t imagine them getting rid of him.

There is, however, a move the Patriots could make that could free up around 11M in cap space and not hurt them significantly: trading Stephon Gilmore. The Patriots have arguably the best secondary in the league with Stephon Gilmore, JC Jackson, Jason McCourty, Jonathan Jones as the cornerbacks and Devin McCourty, Patrick Chung and Adrian Phillips as the safeties. Jones and Jackson were both undrafted free agents and over the years, the Patriots have made stars out of undrafted free agents such as Malcolm Butler, Justin Coleman and Kyle Arrington to name a few. The Patriots are great at developing cornerbacks and they also have a young high draft pick in Joejuan Williams waiting in the wings. In short, the Patriots are in great shape at secondary, with or without Gilmore, which makes him a very valuable trade piece.

Gilmore just won NFL Defensive Player of the Year last season and was clearly the best cornerback in football over the past two seasons. Belichick is the master of unloading players at the peak of their talent and with Gilmore turning 30, he might’ve hit his peak in 2019, making this the perfect time to trade him. So the Patriots could unload a superstar player who’s peaked, save 11M and get themselves a top 3 round draft pick in the process. That seems like the ultimate Belichick move.

Based on all that evidence, I put the chances of Gilmore being a Patriot at the start of the 2020 season at 40%.

So, where do the Colts end up in all of this. The Colts currently have a group of cornerbacks with crazy boom or bust potential. As it stands now, they have:

The Colts can roll with that unit into 2020 and feel somewhat comfortable, especially since the potential is insane, but the floor with this unit is very low; they lack stability and consistently. If Rhodes is at his worst and Ya-Sin has a sophomore slump, this secondary will get torched a lot. Xavier Rhodes and TJ Carrie are only on a one year contract, so the Colts only have Ya-Sin and Tell with contracts beyond this season. They aren’t committed to many players or a lot of money beyond 2020. So, where does Stephon Gilmore fit into all of this?

The next big piece of the puzzle involves the trade compensation; how much is a 30 year old at the top of his game with 2 years left at 11.5M per season (cap hit wise) worth? Darius Slay, a few weeks ago, was traded to the Eagles for a 3rd and 5th round pick. He’s similar to Gilmore as he’s a top cornerback who’s around 30 years old. When Marcus Peters was a hot commodity, the Chiefs got a 4th round pick that season and a 2nd round pick the following season for him, but had to give up a 6th round pick for that season. He was a young, extremely talented top 7 cornerback with a good amount of baggage.

So, if Slay got a 3rd and 5th and Peters got a 4th and future 2nd, what is Gilmore worth? Somewhere around both. I believe that a 3rd and 6th would be good enough to get Gilmore. Darius Slay is one of the best cornerbacks in the league as well and the Patriots might be more motivated to get rid of Gilmore than the Lions were to get rid of Slay. It’s important to remember that the Patriots are as quiet as the family in “A Quiet Place” so we don’t know of their intentions with anything.

If we use the NFL draft pick value chart, we see that it took 188.3 points for the Eagles to get Slay. If the Colts were to offer a 3rd round and 6th round pick, that would equal 228 points, which is the same value as a high 3rd round pick and quite a bit more than what the Eagles offered.

I believe if the Colts offered the Patriots:

The Patriots would accept that deal.

The last, but most important piece of the puzzle is would Gilmore fit in the Colts’ system. Gilmore was a very good player for the Bills in his final seasons there and then took the next step forward with the Patriots. The Patriots’ defensive system, according to Steven Ruiz in an article from January 2020, is based on an even balance between man and zone coverage, specifically 54% man and 46% zone. No team plays more man coverage than the Patriots and while the Colts play a ton of Cover 2, they rely on physicality and a lot of man coverage from their cornerbacks underneath and clearly that’s something Gilmore thrives at doing since he’s done it for 3 years at an elite level with the Patriots. So that alone should answer whether he would be a good fit or not; the answer is a resounding yes.

The second part to the question is whether or not he will hurt the development of Rock Ya-Sin. Ya-Sin has a lot of potential and you don’t want to do what the Bengals did a few years ago and draft cornerbacks as their top pick 3 times in 5 drafts, when they already had two established starters in Pacman Jones and Leon Hall. What that did is it stifled the development of Kirkpatrick, Dennard and Jackson. The good news is the Colts aren’t in that situation since they’re only dealing with one young player in Ya-Sin and they aren’t the train-wreck the Bengals are. Chris Ballard always preaches competition so if Gilmore were to be acquired, I would fully expect Ya-Sin to battle Xavier Rhodes for the #2 cornerback spot with the loser being demoted to the 4th cornerback role (since Kenny Moore is the nickel corner aka the #3 cornerback).

So what are the pros and cons to a Gilmore to Colts deal:

The Colts could have a chance to snag a top player who might secretly be on the trade block for a very good price. When I started writing this article, I didn’t think it made sense, but I essentially talked myself into liking this potential deal for the following reasons:

That, to me, is one hell of a draft that will tremendously impact your franchise for at least the next two seasons, if not more. That’s why (and trust me when I say I did not expect to be saying this when I started writing this) I think this is something the Colts should seriously pursue.

Hey! Did you know that Stampede Blue is making a Draft Guide? Of course you do! Click here to head to our landing page where you can pre-order the guide for the same price as a cup of coffee. Help support your favorite Colts website with this purchase that is guaranteed to impress! The guide will be released on April 11th!