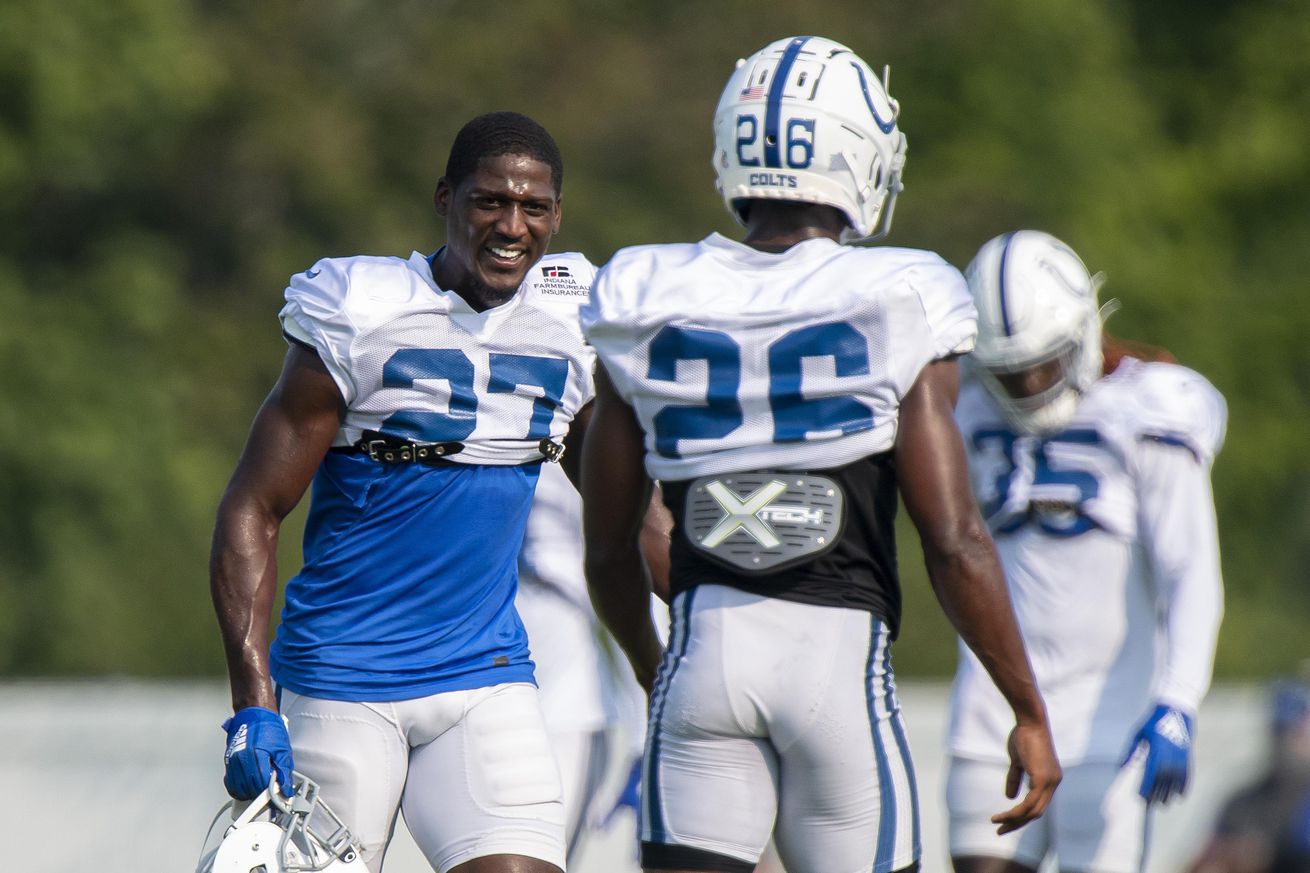 Which positions will be the toughest to figure out on Saturday for the Colts?

The 2020 NFL season is right around the corner as games are less than two weeks away. Before we get to that point though, there are a few big decisions to be made in regards to the roster. The Colts have until Saturday to get their 80 man roster down to just 53 players. The good news is that the practice squad has expanded to 16 players so a lot of these players that we have seen in camp will likely stick around for the season. Still, there will be a ton of movement in the next few days as teams sign and claim players who are cut prior to Saturday.

Before we get to the big day though, I wanted to take a second and look at a few of the toughest decisions the Colts have to make prior to the cut downs.

This spot has been the talk of the offseason as the bottom of the depth chart at wide receiver has been a pretty open and ongoing battle. The top four receivers on the team have been locked in since the draft as T.Y Hilton, Michael Pittman Jr, Parris Campbell, and Zach Pascal firmly are safe on this roster. It gets a bit more interesting after that though.

First off, do the Colts keep five receivers or six? With all the injuries they sustained at the position last year, I would assume they would keep six but they could go either way. Next you have to look at the players fighting for the last spot or two. Daurice Fountain has been a fan favorite for the last two seasons and has put together a very good camp coming off of a devastating injury last offseason. He has been running a bit with the ones and twos lately in camp too. Rookie receiver Dezmon Patmon has also been looking good in camp from all the reports. Patmon is also the group’s most impressive physical athlete in terms of his size and speed (6’4” 225 pounds while running a 4.48).

The other two contenders for the final spot are Marcus Johnson and Ashton Dulin. Johnson played a lot last year and was one of the best receivers on the roster down the stretch. Dulin didn’t play much on offense as a rookie but was a key special teams piece and the gunner on punt coverage. Dulin however has had a fairly quiet camp and Johnson has been injured for most of the offseason with a hamstring injury.

Just by reading the tea leaves on what could happen here, I’d guess that Fountain and Patmon are the two to make the roster and Dulin and Johnson are (hopefully) placed on the practice squad. Any combination of these four players wouldn’t surprise me though come cut downs.

Gorgeous ball down the field from Jacob Eason, great play by Reece Fountain going to the back shoulder

Linebacker is another position that the Colts have to make a tough decision regarding who to keep. The first question though is just how many stick on the initial 53? With the addition of Tavon Wilson, who played a lot of linebacker for the Lions last year, the Colts could go as few as five linebackers on this roster or as many as seven depending on how they want to break it up.

The three starters are obviously set with Darius Leonard, Anthony Walker Jr, and Bobby Okereke. After that though, it is a real tough battle. Former seventh round picks Matthew Adams and Zaire Franklin have played a key role on special teams and as depth spot starters for this defense the last two seasons. 5th round pick in last year’s draft E.J Speed is a player the team has been extremely high on and thinks has tons of potential. Rookie 6th round pick Jordan Glasgow is already looking like the special teams stud they drafted him to be so far in camp.

If I had to guess with this group, I’d lean towards them keeping six with Speed, Franklin, and Glasgow making and then trying to sneak Adams onto the practice squad. This again though is another position that I could see any number of combinations with this group of four players. There is a really tough decision to be made with this group.

Coming into camp, the Colts had one of the more well rounded and impressive tight end groups in the league. Jack Doyle was to be the starter with Trey Burton serving as the flex tight end and Mo Alie-Cox as depth and as an occasional extra blocking tight end. Unfortunately the injury bug has hit this group hard. Alie-Cox started camp on the PUP list due to a thumb injury he had last season and Doyle has missed some time with a neck injury. The worst news however has been that Burton will miss at least a few weeks of the season due to a calf injury he suffered in practice the other day.

Due to all these injuries, the Colts may need to look for another tight end to make the opening 53 man roster. Currently, the team has a few in house options they could look at. Xavier Grimble is a veteran tight end in this league who spent some time with the Texans in his career. He fits more of the all around, blocking tight end mold. For the flex tight end though, the Colts currently have rookies Dominique Dafney and Farrod Green along with Hard Knocks star Andrew Vollert. While the young guys are all intriguing, it is risky considering their lack of experience.

Outside of the team, there are a few options to consider. The team was interested in veteran free agent Delanie Walker at one point before opting to sign Burton. Walker, 36, has lost a step over the years but could still be a reliable presence until Burton is healthy. Veteran Charles Clay is also a free agent but again he has lost a step over the years. Ross Travis is currently on the Jets roster but may become available via cuts if the Colts wanted a familiar face.

Overall I think the Colts will go with one of the young guys currently on the roster here. They may elect to cut them initially and bring them up on game days from the practice squad until Burton is healthy (game day roster expand to 55 this year).

Colts are a bit banged up at tight end right now.

Think only 1 of their 6 TEs have practiced in all four full padded sessions. https://t.co/BYACUrp49i

The final point we are going to talk about is probably the most important one on this list. The Colts were hit really hard when Marvell Tell III decided to opt out before camp started. Not that Tell was going to play a huge role on this team but he was the primary backup on the outside behind Rock Ya-Sin and Xavier Rhodes. Now if either of those two go down or miss time this year, the Colts are looking at three primarily slot corners to play on the outside.

Kenny Moore II and T.J Carrie both could play on the outside but I, and this coaching staff, am a big proponent of playing players where the have the best chance to succeed. That isn’t on the outside for either of these players. There are a couple in house options for this spot but they haven’t really made any impact at all in camp. The only real intriguing player in house is UDFA CB Travis Reed who has impressed a bit in camp. I think he is more a practice squad guy out of the gate though.

I think the team has to look at potential cuts/available free agents to fill this massive void in depth. Prince Amukamara was just released by the Raiders and would be a really good add this late in the offseason. Ross Cockrell is also coming off a good season with the Panthers and is still available as well. In terms of cuts, there could be a few options. NFL.com did a list of potential surprise cuts that could happen this offseason and mentioned both Rasul Douglas and Sidney Jones from Philadelphia as potentially being on their way out. Either one would be an improvement to the Colts’ depth.

I think the Colts will either add someone here or potentially have UDFA Travis Reed make the opening roster. For me, I think there should be an outside addition to add experience to the group’s depth but I think Chris Ballard knows this is an issue currently and will do something come Saturday to improve the depth chart at that spot.

Me watching the waiver wire on Saturday for any outside CBs available for the Colts… pic.twitter.com/CrYEUpwDqM