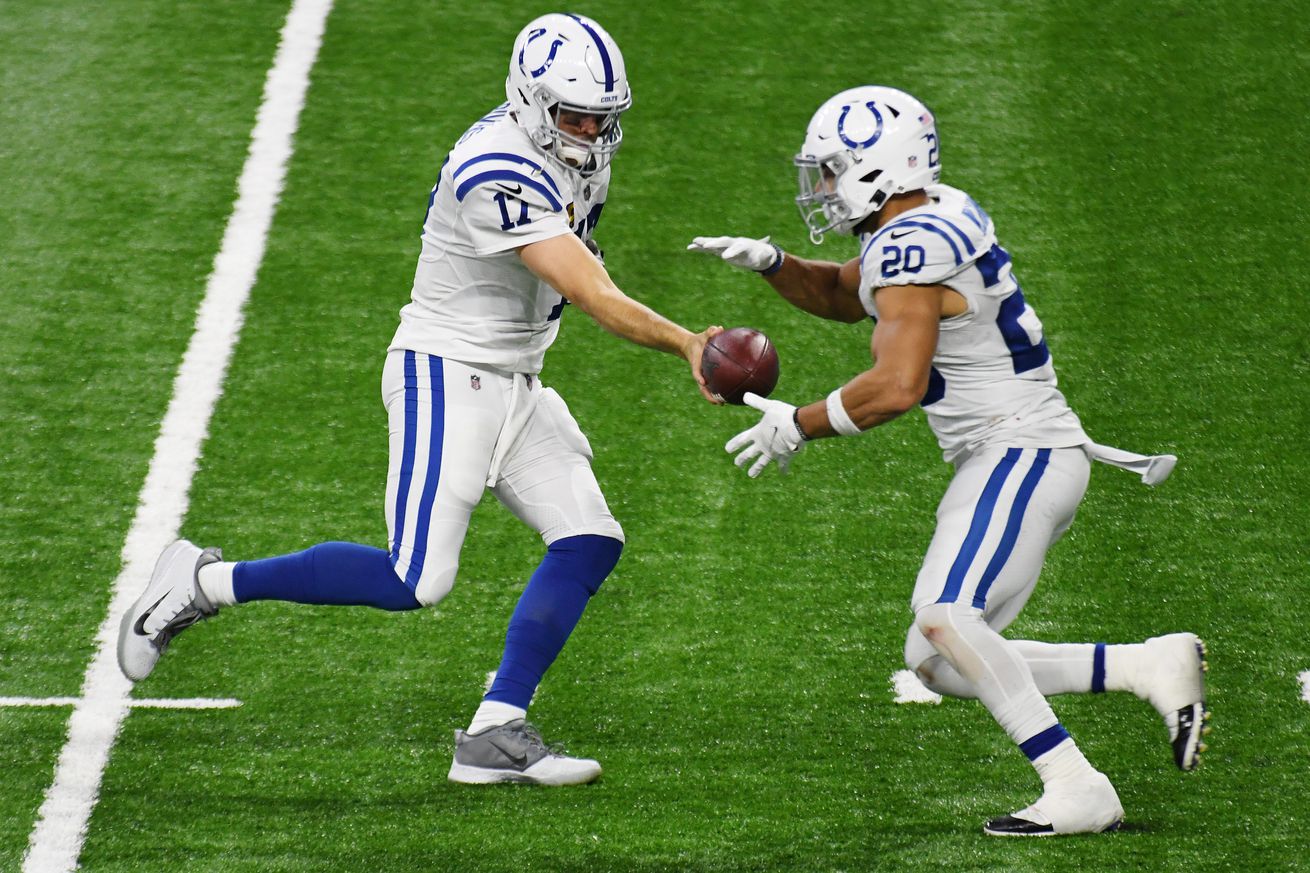 Welcome to SB Nation Reacts where SB Nation gets fan reactions from the previous week’s results, as well as asking questions about the coming week’s slate. We also take a look at the weekly changes in confidence level from the team’s fans.

Recently Colts’ fans have witnessed the team pull out a comeback win in Week 6 against the Cincinnati Bengals, then put up 41 points on the Detroit Lions following their Week 7 bye. The Ravens picked up their second loss of the season last week against the Pittsburgh Steelers in spite of racking up over 450 yards of total offense, and holding their division rivals to 221 total yards with less than 25 minutes of time of possession.

Nevertheless, Colts fans have remained as confident in the squad as they were coming out of the bye week with a 93 percent confidence level. Naturally, with the wins come a higher confidence rating with fans, as the weeks following their two losses of the year have received the lowest percentages of the season (57% heading into Week 2, and 65% headed into Week 6).

This will be a massive test for the Colts on both sides of the ball, but the Frank Reich led Colts have pulled off unpredictable wins in the past, such as the 19-13 victory against he Kansas City Chiefs in Week 5 of last season. Can the Colts pull off another big win against one of the AFC’s finest? We’ll have to see.

Next we look into some of the national questions.

The first of the national questions in this week’s surveys is in regards to which deadline addition will make the biggest impact.

Those who are being discussed are Antonio Brown (signed by Tampa Bay), Carlos Dunlap (traded from Cincinnati to Seattle), Le’Veon Bell (signed by Kansas City), and Yannick Ngakoue (traded from Minnesota to Baltimore). These four all feel as if they’ll make an impact in their new destinations if I’m being totally honest.

Brown will either become a cancer within the organization as he did with the Steelers and Las Vegas Raiders, or he’ll remain more grounded than we expect with Tom Brady guiding him as he did in his short stint with the New England Patriots. Bell’s outlook in KC seems eerily similar to that of Brown’s. Will he be okay with being a role player if he doesn’t explode onto the scene with the Chiefs, or act like a petulant child like he did in Pittsburgh and New York when things don’t go his way?

Either way, at least when looking at potential impact with a new team, Bell and Brown would seem to be the obvious choices given their potential to make big plays, the possible amount of times they’d touch the ball, and the fact that their quarterbacks would want the ball in their hands if they progress in practices and on Sundays.

Dunlap will get a chance to work within a 4-3 Seahawks’ scheme which may just benefit him well after being in several interesting 5-2 looks with the Bengals before being traded. Dunlap has only one sack, and 4 QB hits to this point in the season, but we know that Pete Carroll will have very serious plans to get him involved using his 6-foot-6, 285 pound frame.

Can he really have that great of an impact? He’ll definitely work well with the rest of the Seahawks’ front-seven, but he’ll have his work cut out for him to even match his worst season since 2012.

Ngakoue headed to the Ravens is a very interesting move indeed. The 6-foot-4, 245 pound edge rusher has been highly impactful, especially in his time in Jacksonville. He’s had a handful of seasons with either double-digit sacks, or bordering on that benchmark, but he’s made his real bread forcing fumbles and batting down passes.

Baltimore is an interesting landing spot for Ngakoue, and we know the history of Ravens’ defenses. It doesn’t seem to be that Ngakoue will play versus the Colts this Sunday, but he’ll have a legit role within the Baltimore defense going forward for sure.

With that, the voters have spoken, and with the caveat that Brown can maintain his mental health and his temper in Tampa Bay, he is most likely to have the largest impact of these four throughout the remainder of the 2020 season — and I tend to agree with that sentiment.

Our next national question touches on which Week 9 game we are most excited for.

The results of this one somewhat surprised me. No, I didn’t think the Colts-Ravens game would have the nation waiting with bated breath on the Week 9 slate. Rather, I expected to see that the survey would reveal maybe a bit of a closer race between the matchups between the Seahawks and Bills, and the Buccaneers and Saints.

Both of the above-mentioned matchups are as pivotal as they can possibly be at this point in the season, however, the Bucs and Saints are a divisional battle that has major implications for the post season even in Week 9. This is their second meeting of the season, and the Saints came away with a 34-23 victory in Week 1. The Saints would ultimately take the lead within the NFC South, AND would have a 6-2 record to the Bucs’ 6-3 with a sweep of Tampa Bay.

The Bills hold a lead in the AFC East, and nothing that happens on Sunday will change that. However, with a loss to the Seahawks, and a Dolphins’ win, Miami and Buffalo will be square in the loss column making the AFC East much more interesting than it has been in years.

On the other hand, the Seahawks and Cardinals are awful close as well and a Seattle loss to the Bills would make the NFC West a race to keep an eye on through the second half of the season as well.

Once again, the voters have made the right choice in their decision to make the Bucs-Saints matchup the game of the week.

Our next national question in the survey asks; Which of the last place teams is closest to contention?

Let’s just start at the obvious — unfortunately, the Bengals are five games out of first in their division, and very little that they can do will change that at this point. They’ve played the Colts and Browns tough recently and lost, and have beaten the Tennessee Titans in their past three games. However, the Steelers and Ravens are not losing anywhere near seven games this season. That’s just not happening and they shouldn’t even be second on this list.

Next, we look at the New York Giants. They’re terrible. They’ve only got a single victory this season. However, the rest of the NFC East is also terrible and the Giants are somehow only two games out. If they were to go on some miraculous run in the second half of the season, they could easily take the division.

With that, nobody could even know what to expect from the rest of the division any more than they could with the Giants. This should at least land the Giants in second among these three teams, but it’s pretty obvious that the nation is simply disgusted with the Giants and the East in general at this point.

The leader among these three last place teams is, and absolutely should be, the Los Angeles Chargers. While highly unlikely, if the Chargers were to go on and win out the rest of their schedule they could definitely take the AFC West. They’ve already had the defending champion Chiefs on the ropes earlier in the season, and they’ve lost a few games this season that they should have left victorious.

With Justin Herbert taking over as the unquestioned starter for the Chargers, he gives them a real chance to take every team they face to the waning minutes of the fourth quarter. The problem is that it hasn’t gone that route much this season. Even if the Chargers can’t take the division (which would absolutely take 11 wins), they still could get into the win column enough to challenge for a Wild Card berth.

There isn’t a second place team in the AFC that’s more than 3 games better than the Chargers, and that’s a very real possibility with a shift in momentum. Once again, at least with the top vote getter, the people were accurate in my opinion.

Finally, we’ve come to the Week 9 fan picks for the upcoming slate of NFL games.

Just in terms of what we’ve already discussed above, the nation has the Buccaneers beating the Saints equaling a season split in the division between these two teams. The survey has also shown that the people expect to see the Seahawks take care of the Bills in their matchup, and expect the Cardinals to beat the surging Dolphins.

Some bad news for Colts’ fans is also within the results, however, as they have the Ravens handing the Colts their first home loss of the season, and have the Texans and Titans both winning against the Jaguars and Bears respectively. It’s hard to argue the survey’s results, but we can hope that the Colts can buck expectations of the nation’s voters.

Below are the remainder of the Week 9 fan picks: