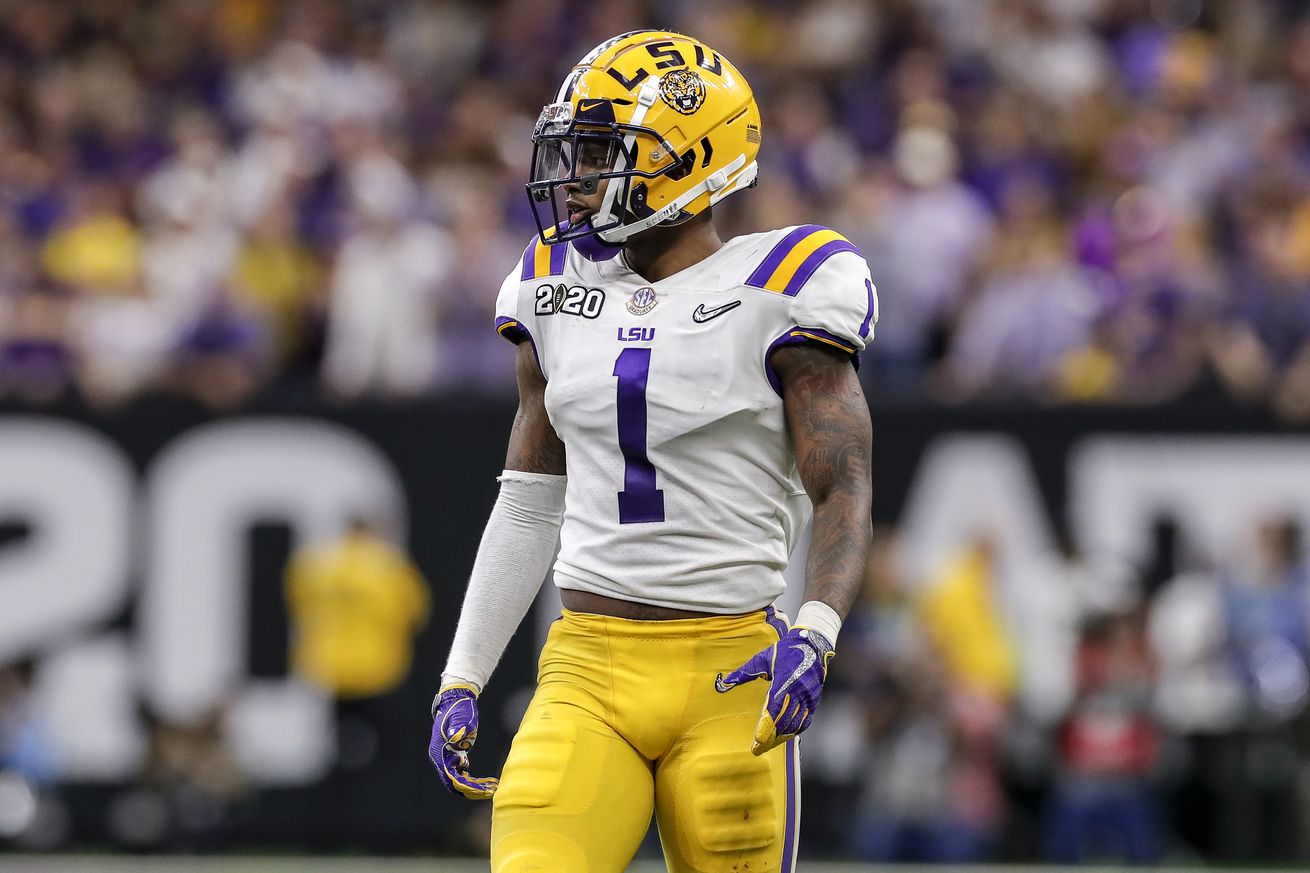 According to TheDraftWire’s Justin Melo, the Indianapolis Colts are among the teams that have met or will meet remotely with prized LSU cornerback Kristian Fulton:

COVID-19 prevented him from making any physical visits.

The 6’0”, 197 pound senior cornerback had 38 tackles, 15 passes defensed, and an interception in 15 starts for the National Champion Tigers’ defense in 2019—earning 2nd-Team All-SEC honors.

Simply put, he was one of the nation’s top cornerbacks this past year—even while battling an ankle injury. In fact, one could make the argument that Fulton’s 2018 tape was even stronger when he was fully healthy just a season prior.

Fulton made 25 starts for LSU during his last two seasons (2018-19), but he did find himself in trouble after his freshman year—after reportedly fudging a drug test for marijuana and was essentially suspended for the entire 2017 season, but still practiced with the team.

Fulton fared fairly well at the NFL combine with a 4.46 forty time, 35.5 inch vertical, and broad jump of 123.0 inches. His SPARQ rating (which measures overall athleticism) is in the 69.4% NFL percentile, which is the 9th best in his draft class among cornerbacks.

As a good athlete himself, Fulton can apparently “play in any scheme”—although he played a lot of press-man coverage in Baton Rouge during the 2019 season.

He had the highest coverage grade by Pro Football Focus over his career of any top cornerback in his draft class and is battle-tested against elite competition in the SEC:

Kristian Fulton vs. Henry Ruggs was must-watch TV. Both players are so good at the LOS.

Ruggs is so absurd; Fulton can match and mirror with the best of ’em. pic.twitter.com/1z6WpTTuw3

Here’s what others are saying on Fulton, who projects to be a mid-late first round pick right now—but it’s still possible he could slide into the early second round for the Colts:

Kristian Fulton from LSU. I love watching him play. 2018 tape is awesome. Played banged up this year and was still a stud. https://t.co/6Iee5c4mGL

I had fun studying LSU CB (22) Kristian Fulton. Excellent foot quicks, fluid and aware. He can play in any scheme— press, off man, zone. He’s patient and under control. Rarely out of position. He needs to get a… https://t.co/69quojEfRp

Kristian Fulton forced incompletions at a higher rate than any other top CB. pic.twitter.com/5L8X5i5GqP

With the signing of veteran Xavier Rhodes (and to a lesser extent, T.J. Carrie), the Colts don’t necessarily have an immediate need at cornerback anymore, but the team could still look to draft and develop their long-term successor on the other side of 2nd-year pro Rock-Ya Sin along the outside—especially if Rhodes should struggle again in 2020—meaning Fulton or another rookie could be quickly ‘fast-tracked’ for a starting job in such a scenario.

Fulton’s one of the most talented cornerbacks in this draft class and would make quite a deal of sense for the Colts at either #34 or #44 overall in Round 2—should he actually fall that far.