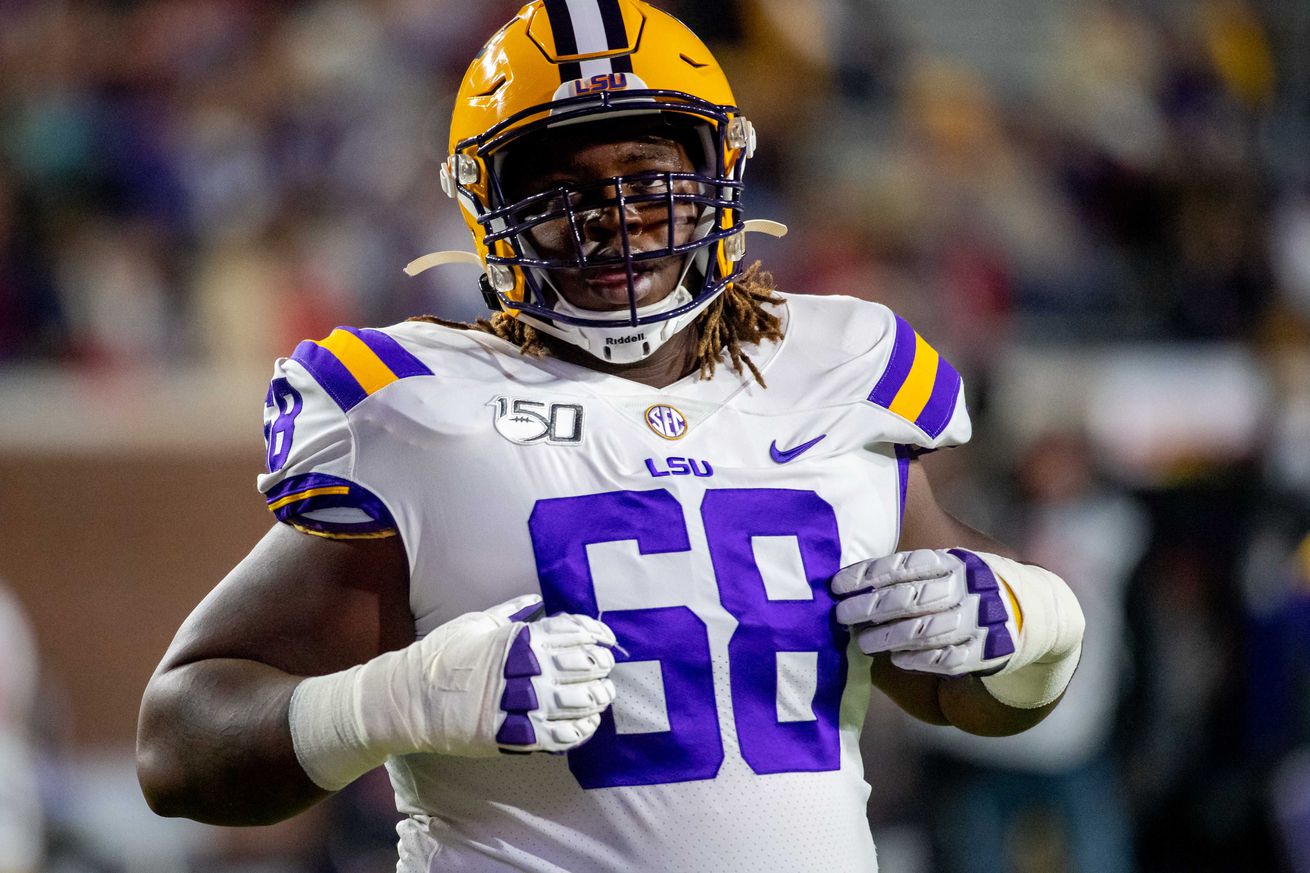 According to TheDraftWire’s Justin Melo, the Indianapolis Colts are among the NFL teams that have met remotely with LSU starting right guard Damien Lewis:

The 6’2”, 327 pound senior offensive lineman for the National Champion LSU Tigers started in 27 straight games at right guard in his junior and senior year—earning First-Team All-American and All-SEC 2nd-team honors in 2019.

Like Colts’ All-Pro offensive guard Quenton Nelson, Lewis admittedly plays with a mean streak and is a road grader in the ground game—that can move (and sometimes pancake) even some of the stoutest interior defenders:

Do yourself a favor and watch LSU’s Damien Lewis (RG).

He’s not going to be the most athletic guard out there, but LSU RG Damien Lewis did a great job of matching power on power against Alabama’s Raekwon Davis and Auburn’s Derrick Brown this year – two future First rounders – and is one of the strongest guards I’ve studied this year

If I had to leave with one player from the Senior Bowl on my team it would be LSU offensive guard Damien Lewis (68). He did stuff like this -blocking two – all week in practice. pic.twitter.com/cIPke4w1cz

He followed that up with a 5.24 forty time, 27 bench press reps, 30.0 inch vertical, and 108.0 inch broad jump at the NFL Combine—and has a SPARQ rating of 60.8% (which is the 5th best among all interior offensive lineman in his draft class).

At 327 pounds, Lewis is simply a tank and a mauler as a run blocker—who can both self-create holes and drive his opponents into the ground.

The rare throwback offensive guard who’s fun to watch because he’s the type of rough-and-tumble interior lineman who can make his own highlights through WWE-like bodyslams into the turf (as well as help create highlights for his teammates).

However, while possessing immense strength and power (and excellent hands), Lewis is a bit heavy footed as a pass blocker (even though he’ll win against any bull rush) and can struggle moving laterally at times in protection—although he’s still an underrated athlete at his enormous size.

Of course, despite the Colts having one of the top offensive lines in football, there’s still room for improvement.

After a breakout 2018 campaign, starting right guard Mark Glowinski had a down year last season and was the ‘weak link’ on the Colts otherwise elite offensive line.

Turning 28 years old, Glowinski could still very well turn it around, but if the Colts opted to draft his successor—even acquire serious competition to push for the starting right guard job like Lewis in 2020, no one could really blame them.

Lewis looks like a “plug-and-play” starter from Day 1, who can be an immediate contributor for the Colts—or any other NFL team for that matter.

It makes sense that Indianapolis has already expressed interest in such a physical and overpowering offensive guard, who can be a force in the trenches—especially run blocking.

Here’s what others are saying on Lewis, who looks like a safe Day 2 pick:

LSU RG Damien Lewis (6-3/335) is a tank on the interior that’s big, strong, and nasty. Really good run-blocker, stout anchor, and great finisher. Reminds me a lot of Gabe Jackson coming out. pic.twitter.com/bxmzbCVZHB