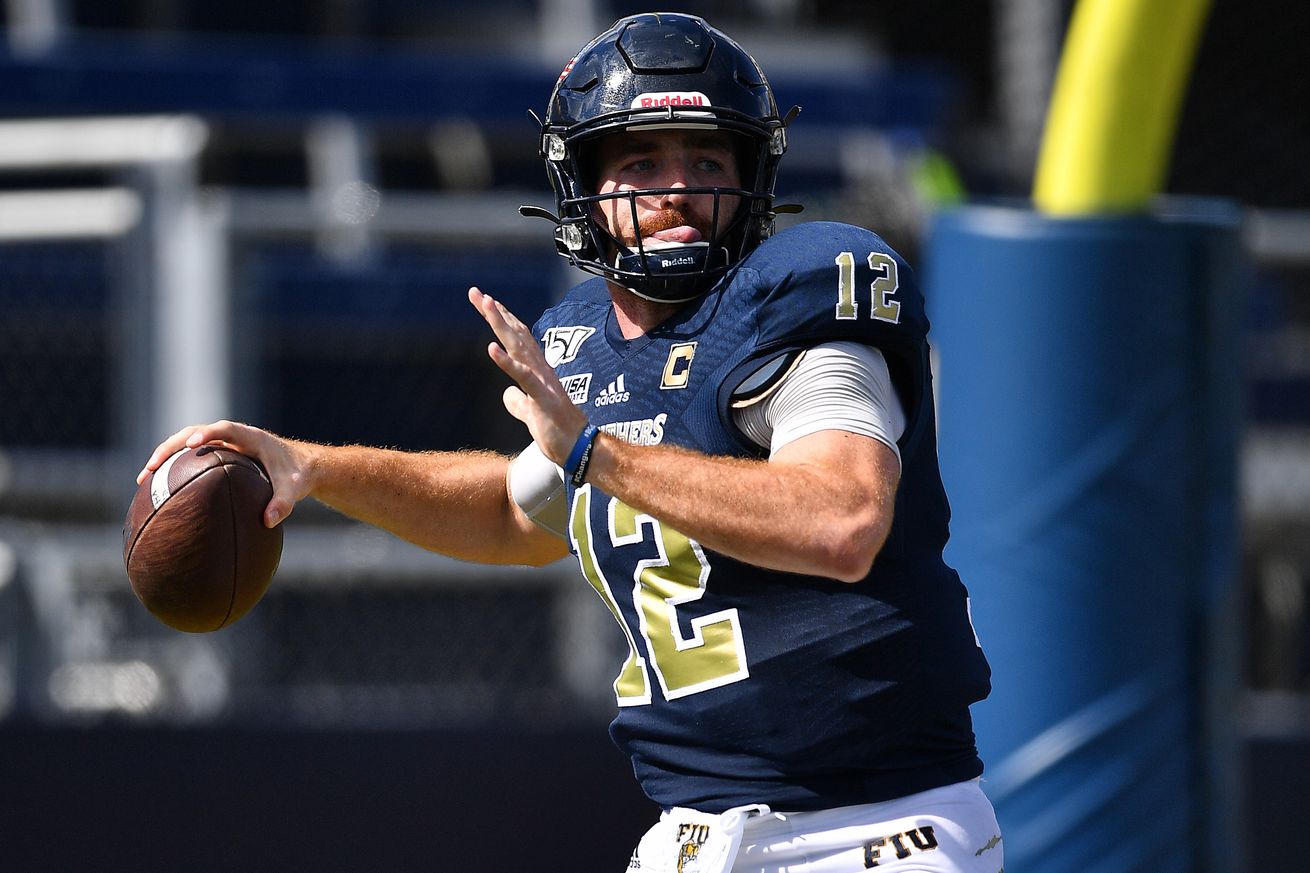 According to The Houston Chronicle’s Aaron Wilson, the Indianapolis Colts are among the teams that are ‘closely vetting’ Florida International quarterback James Morgan ahead of the upcoming NFL Draft.

It’s not the first time that the Colts have reportedly been connected with Morgan.

The former transfer from Bowling Green is a big bodied quarterback with an equally big arm and is just one season removed a 26 touchdown to 7 interception junior season in 2018 with the Golden Panthers—as he was plagued by receiver drops his final year.

He’s tough—having emulated Green Bay Packers legendary quarterback Brett Favre as a kid growing up in Wisconsin and isn’t afraid to ‘hang tough’ in the pocket to deliver a big throw when under duress.

As one of the top NFL prospects participating, Morgan really impressed in this past January’s Shrine Bowl Game.

He posted a 4.89 forty time, 29.0 inch vertical, and 112.0 inch broad jump at the recent NFL Combine. His SPARQ rating is in the 22.8% NFL percentile, which is the 12th best among quarterbacks in his draft class who tested at the NFL Combine.

Despite his mediocre measurables, Morgan is considered to be a potential sleeper as an early ‘Day 3’ pick in the NFL Draft—drawing comparisons to Jacksonville Jaguars starting quarterback Gardner Minshew, who was a 2019 6th round pick:

Who is this year’s Gardner Minshew? One that evaluators point to as a possibility is FIU QB James Morgan. pic.twitter.com/mKL5izKEvA

Morgan has a live arm and enough traits that translate to the pro game. This is the developmental QB I would be targeting on day 3. https://t.co/VXd9RkXWmt

Luton has a strong arm and he’s an excellent decision maker. Morgan has excellent vision, poise and arm strength. 5th round is probably the sweet spot for both players.

Where Morgan needs to improve is in his overall accuracy, mechanical footwork, and progression of reads.

While he has an incredibly live arm and an “MLB fastball”, he’ll also need to display better touch on shorter throws and get rid of the ball quicker all together—as he doesn’t have the plus mobility to escape pressure in the pocket and extend plays.

Morgan is what he is, an early ‘Day 3’ developmental quarterback prospect with a lot of natural arm talent, pocket composure, and great make-up, who’s not an explosive athlete and will have to overcome some passing deficiencies at the next level.

Of course, the Colts could use a long-term answer at the starting quarterback position as veteran starter Philip Rivers is 38 years old. Additionally, the team could start looking to develop a top backup quarterback all together—as Jacoby Brissett is entirely too expensive right now and is set to become a free agent at season’s end (*if he’s not moved sooner).

Yes, fan favorite backup quarterback Chad Kelly is still in the fold, but general manager Chris Ballard has preached competition all over the roster since his arrival—and this could become yet another instance.

Morgan has the live arm that is worth rolling the dice on in the later rounds of the NFL Draft.

That being said, he hasn’t shown enough to be viewed as a potential future franchise quarterback option just yet—but could be a low draft capital, developmental passing project for the Colts.