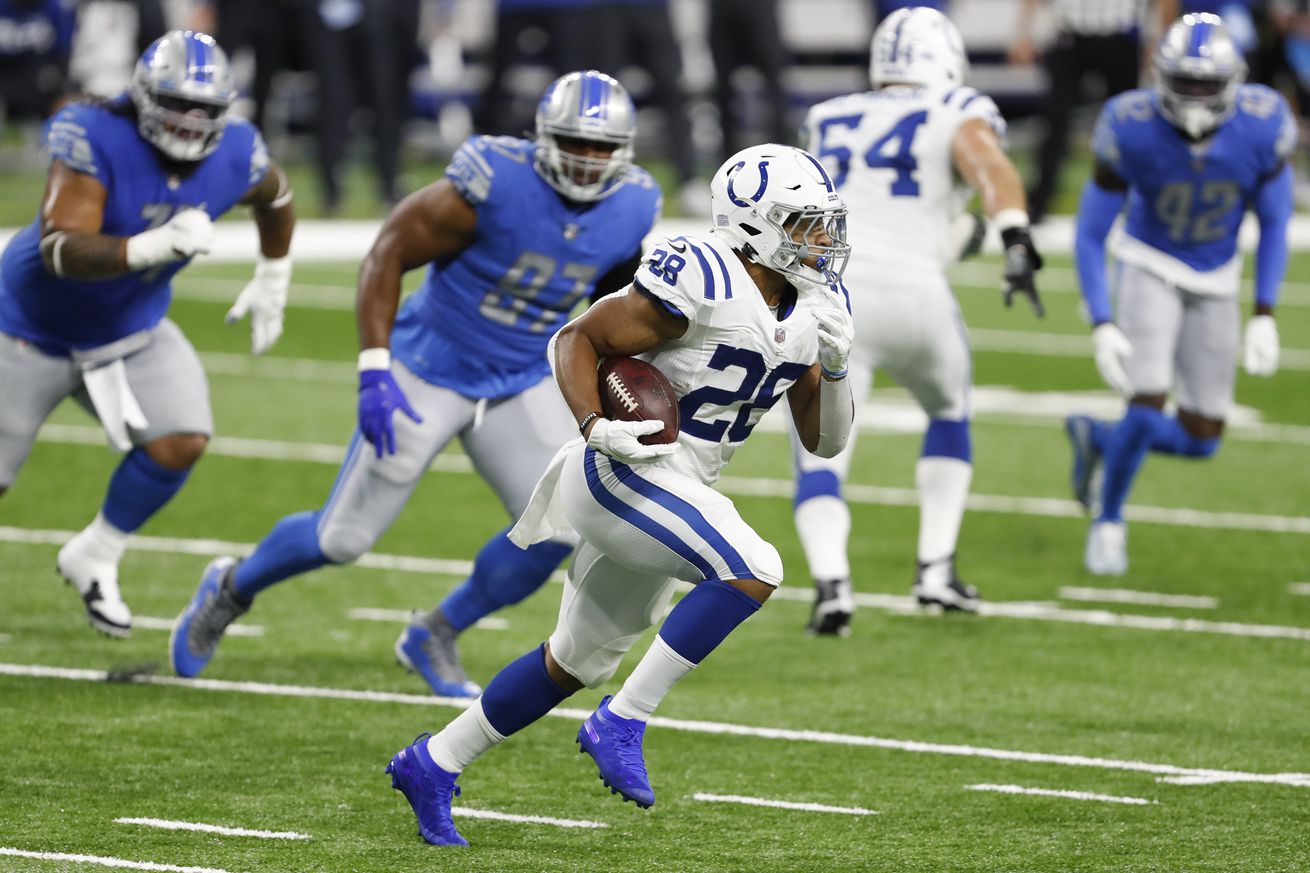 The Colts went to Detroit on Sunday for their week 8 contest against the Lions. It was a strong showing overall on both the offensive and defensive sides of the ball for Indy, who ultimately came out with a 41-21 victory.

Prior to the game, I offered two players that I thought would be key for the Colts to leave Detroit with a victory. You can find that article linked here.

Let’s see how the players I chose performed on Sunday.

I picked Taylor this week for a couple reasons. The Lions have had two consecutive games holding opponents to under 70 yards rushing, establishing a run game early makes it easier to control pace, and most importantly, Frank Reich’s insistence that the identity of the Colts offense is running the ball.

“We are committed to the run…That’s who we want to be, we want to run the football.”

It’s easily the biggest disappointment of the 2020 season for the Colts.

On Sunday, Taylor had a very underwhelming performance. He handled 11 carries for just 22 yards, which is an average of only two yards per carry. He also caught two receptions on three targets for nine yards in the air.

The production was just not there from Taylor this week. He is only half way through his rookie season, so maybe it is unfair to have higher expectations, but Taylor continues to struggle in finding the open holes. With the offensive line that the Colts have, you would assume that he would be putting up better numbers.

Fortunately, for the Colts, the other running backs were extremely impactful on Sunday. Nyheim Hines had two receiving touchdowns on his three catches that accumulated 54 passing yards. Meanwhile, Jordan Wilkins took care of the ground game with 20 carries, 89 rushing yards, and a touchdown of his own.

Wilkins was averaging 4.5 yards per carry on Sunday, and made some very impressive plays when being handed the ball. It was consistently taking a few defenders to bring Wilkins to the ground, and he was able to find some open holes and pick up important yardage later in the game.

On Monday, Reich said that Taylor was battling an ankle injury, though he did not find out about it until after the game. The injury could have something to do with his lower level of production, but I definitely can’t say for certain.

It was pretty easy for me to pick Rhodes this week as my key player on defense prior to the game. The Colts have been really good all year long on stopping the run, and that was proven once again on Sunday when they gave up a total of just 29 rushing yards for the whole game.

If the Lions had any chance in winning this game, it would be won in the air. Matthew Stafford would have to air out the ball and pick up some big yardage. He ended with 336 passing yards with three touchdowns and an interception taken back for a touchdown. Overall, I would say Stafford actually had a pretty good game and the Colts secondary struggled from time to time.

Rhodes played in the NFC North for seven seasons with the Vikings before joining the Colts this year. That means that he has played against the Lions, a NFC North rival of the Vikings, many times over his career. He at least had an idea of what he was up against this past week.

The stat line doesn’t show a ton of production for Rhodes who had three solo tackles on Sunday, with basically no other statistics. I thought overall Rhodes played well against the Lions with a few hiccups here and there, but certainly nothing to go crazy over.

Rhodes was the defender on one of Marvin Jones’ touchdown catches, where Jones just beat Rhodes and Stafford hit him just beyond where Rhodes could reach.

Rhodes didn’t particularly have an outstanding game this week, but he and the rest of the Colts secondary did enough to keep the Lions from winning the game. Rhodes has had a solid season up to this point, and I expect that to continue for the second half of the year.