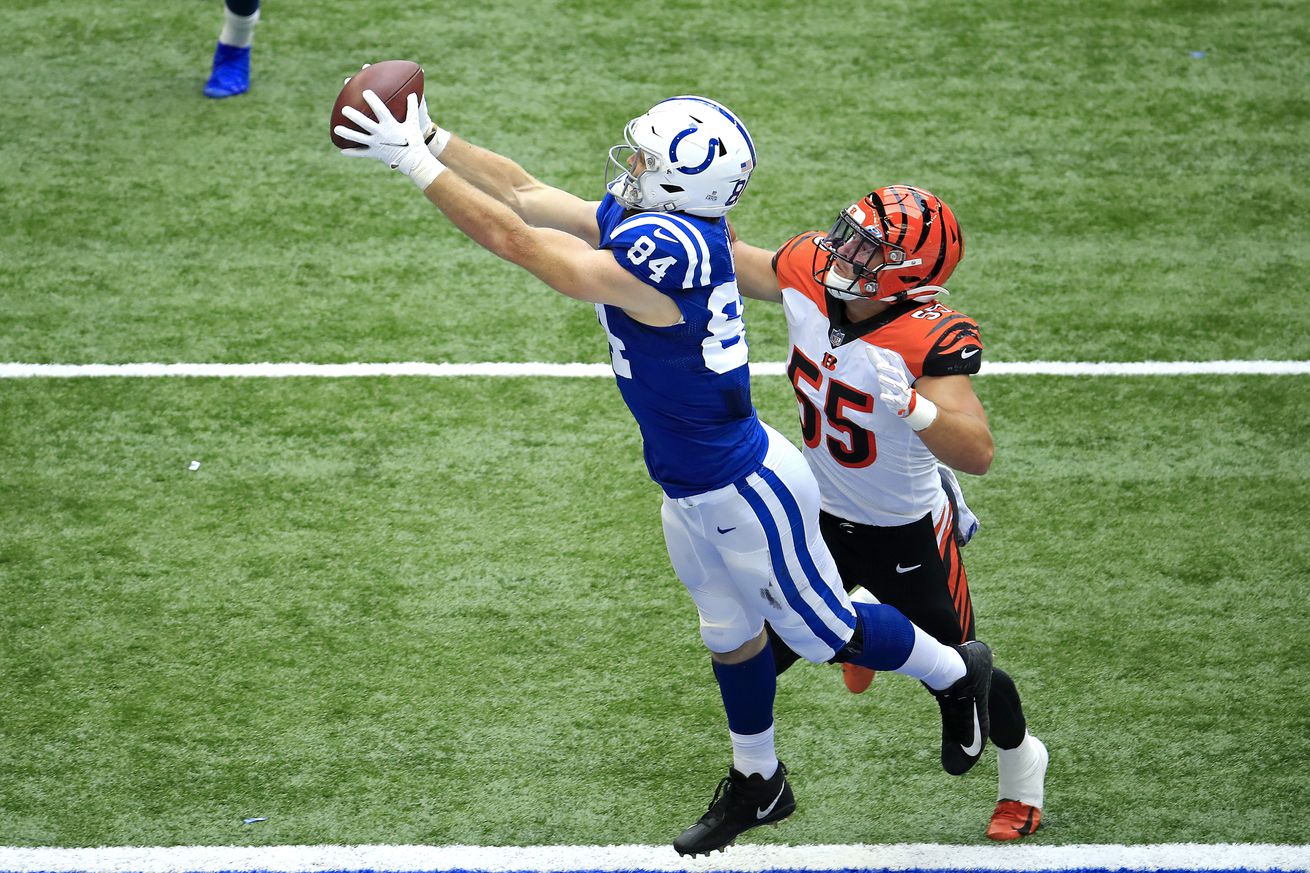 Well, that wasn’t pretty. The Colts entered a game that they should have dominated and found themselves quickly in a 21-0 hole. The vaunted top overall defense in the NFL? Swiss cheese for Joe Burrow. The “bad” Bengals offensive line, looked excellent in protection and got Joe Mixon going on the ground as well.

To say that the Colts were sleepwalking at the start of this game wouldn’t do the situation justice. It was horrifyingly bad and there was very little confidence that Philip Rivers could lead an anemic offense back from that kind of an early deficit.

What happened for Rivers and the Colts passing offense in the second quarter is something Frank Reich and his staff needs to build on. Check downs to his running backs out of the backfield, screens and crossing routes to his speedy receiving options, and playing the boundaries to his deep weapons and tight ends were all a recipe for success.

Marcus Johnson has looked like the most dangerous Colts receiver at various times of the last three seasons. Today, he looked like he was clearly the teams best receiving option. He has speed, runs fluid routes, and clearly has the trust of Philip Rivers going deep. If Rivers hadn’t overthrown him in the second half, Johnson could have had another touchdown and likely gone over 150 receiving yards.

Trey Burton got dinged up at various times throughout the game but he also is clearly getting up to speed since he returned from the injured reserve a few weeks ago. Reich has taken no time trying to work him into the game plan and he clearly is the best receiving tight end on the team at the moment — though Mo Alie-Cox could create an argument if he got more opportunities.

Jonathan Taylor averaged 5 yards per carry and tallied 60 rushing yards and 55 receiving yards. He continues to be a reliable target out of the backfield, hauling in all four of his targets. Rushing was not a big part of the game due to the Colts playing from behind.

Undrafted rookie receiver De’Michael Harris got an opportunity today, ahead of draft pick Dezmon Patmon. The best way to describe Harris is “fast.” He looked like he was shot out of a cannon every time he touched the ball and appears to have a similar skillset to the injured Parris Campbell.

It’s possible Harris will end up back on the practice squad but he certainly looked the part of a promising youngster.

A week ago, our quick reaction gave the defense a bit of a pass for a poor first half performance. The reason is that the unit held the league’s best rushing attack in check and forced Baker Mayfield to win the game with his arm. What was sad is that there wasn’t a particularly strong plan to find ways to frustrate Mayfield early in the game or to look particularly prepared for his penchant for naked bootlegs and throwing on the run.

This week was the same but with Joe Burrow. This is a guy who has gotten rattled when under duress and who didn’t spend considerable time on the ground in college at Ohio State and LSU. The defense came out vanilla. Matt Eberflus appeared entirely content again to ask his group to play on their heels early in the game.

This is something that will have to stop. The Colts cannot afford to get down early in games consistently and hope to have an offensive surge to get them out of trouble. Putting considerable pressure on Rivers to play hero ball has been a recipe for disaster and so the team needs to play to its strengths.

Namely, the Colts defense is stifling when it plays aggressively. The secondary is better when they’re playing tighter in coverage and contesting catches than they are when they’re leaving soft zones for opponents to settle in. The defensive line is a good unit and it received contributions from numerous players, including some strong play from Tyquan Lewis at defensive end (FINALLY!!!!!).

However, this group doesn’t have a big homerun hitter as a pass rusher. This means that Eberflus needs to get somewhat creative about how he will get pressure on quarterbacks. Stubbornly sticking with the “original plan” of rushing with the front four will result in allowing rookie quarterbacks look like Pro Bowlers. There is too much defensive talent to excuse this passive early game mindset.

This defense needs to set the tone early. The identity of this team should switch to the same kind of mentality as there was with the Legion of Boom in Seattle or with the Ravens and their nasty defense with Ray Lewis. Cover-2 shell and off-man zone stuff is great when your defense lacks talent. When it’s a strength, it’s time to make life miserable for opponents from the jump.

A shoutout to rookie safety Julian Blackmon who continues to look like an absolute stud early in his career. His playstyle and athletic ability is a perfect match for what the Colts need at the safety position and he has made impact plays in every game of his young career.