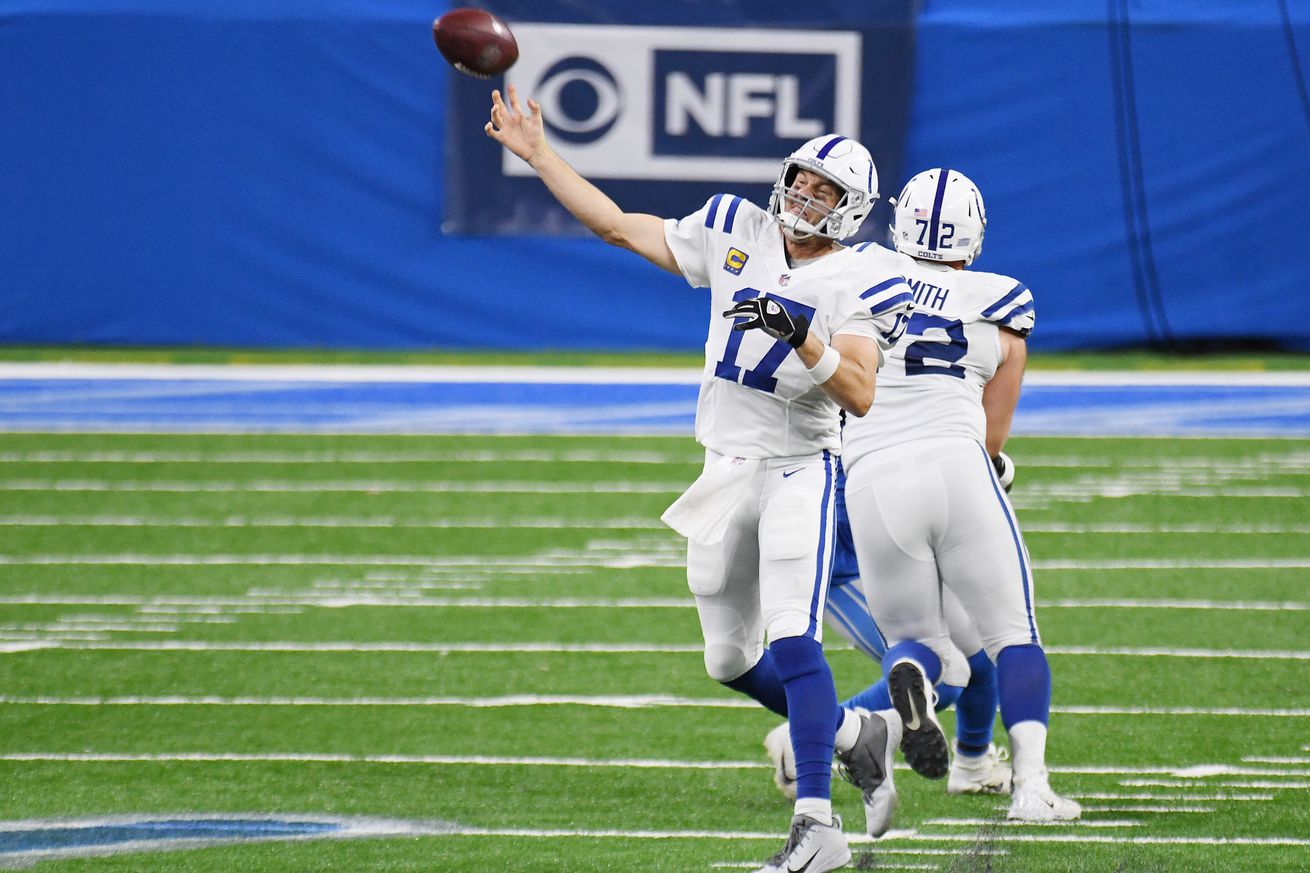 Since week 1, there have been a lot of comments about Philip Rivers not being able to throw far anymore. I track and publish passing depth numbers weekly, so I am already pretty familiar with the data, but I did a deeper dive to hopefully answer some questions that may not have been addressed in my previous articles.

Before looking specifically at Rivers’ numbers, I first need to have a benchmark to compare his performance against. From the first 8 weeks of 2020, I took all QBs that have had at least 100 attempts (less QB spikes). The idea here is to look at only data from primarily starting QBs and not include backups or gadget flea flicker throws from WRs.

That process left me with 32 QBs and I categorized their attempts and completions into 5 bins by attempted air yards (distance thrown):

I then totaled the data and calculated averages by distance:

I’m going to refer to this as NFL averages, even though that isn’t quite accurate as it is a subset of all attempts.

The first thing I wanted to know was how often Rivers throws long. As you can see in the above table, about 70% of all passes are thrown 10 yards or less, leaving about 30% of passes greater than 10 yards. I will use that as the demarcation between “short” and “long”.

With that definition, I calculated the % of throws that are long for each QB, which gives me the following table, sorted by QBs who throw long the most often.

Philip Rivers ranks 4th in the highest % of attempts at 35.1%. However, that can be misleading as the bin sizes are large and the 10 yard cutoff is somewhat arbitrary. His average depth of target (aDOT) of those throws is 17.7 yards which only ranks 27th.

A better visualization is a histogram of those throws:

Rivers throws far more passes between 11 – 20 yards than the NFL avg, but less than the average for most of the longer distances.

So, it really depends on your definition of “long”. If 21+ yards is long then Rivers doesn’t throw long as often as other QBs. Of course, since his % of passes over 20 yards is -1.9% below the NFL average, that translates to -4.4 total passes or a little over 1⁄2 an attempt per game. So, even if you have a 20 yard cutoff, he is pretty close to average.

Attempts are fine but if they are not completed, what does it matter? Is Rivers accurate when he throws downfield?

Rivers completion rate for passes > 10 yards is 4th highest at 59.3%, a full 8.1% higher than the average QB. But again, that can be misleading. I’ve already shown that his aDOT on those passes is shorter than most QBs, which means his completion rate should be higher. Basically, completion rate alone doesn’t tell us the whole story.

To truly measure accuracy, you have to account for distance and location on the field for each pass and determine the probability of each completion, which sums to an expected completion %. Fortunately, the nflFastR data source that I use calculates that, allowing for a measure called completion percent over expected (cpoe).

Here is what QB accuracy looks like after adjusting for expectation:

On passes thrown farther than 10 yards, Rivers has the 6th best accuracy completing +8.0% more of his passes than expected. His accuracy between 21 -30 yards is even better with a whopping +25.4% completions over expected.

I think it is safe to conclude that Rivers is very accurate downfield.

The only remaining question is what is the value of those passes. For example, a 15 yard throw on 3rd & 30 might not have much value.

The standard to measure play value is Expected Points Added (EPA), which accounts for down, distance, field position and other game situation variables and applies a far better relative value to play outcome than just yards.

If I measure the average EPA for all throws > 10 yards and plot them against the average distance of those throws, I get the following for each QB:

I have identified QBs in the 4 corners to give you a flavor of the spectrum of long passing.

Rivers is like a Drew Brees: his distance is on the shorter side, but he has the 7th highest value added per attempt.

The data say that relative to other QBs in 2020, Rivers is throwing farther than 10 yards more often, with higher accuracy and with more average value. I also looked at the data for his previous seasons to see if he has fallen off those numbers.

Compared to prior years, he is again throwing long more often, with higher accuracy and with more average value.

As a QB ages, his arm strength will most definitely fall off and Rivers turns 39 next month, so it’s almost certain that has affected his passing. It’s possible that variables like scheme, opponent, wide receivers corps, protection and other aspects of the game that impact all QBs are offsetting an actual decline in downfield passing quality.

However, at the end of the day production is all that matters and Philip Rivers downfield production is showing no signs of regression.