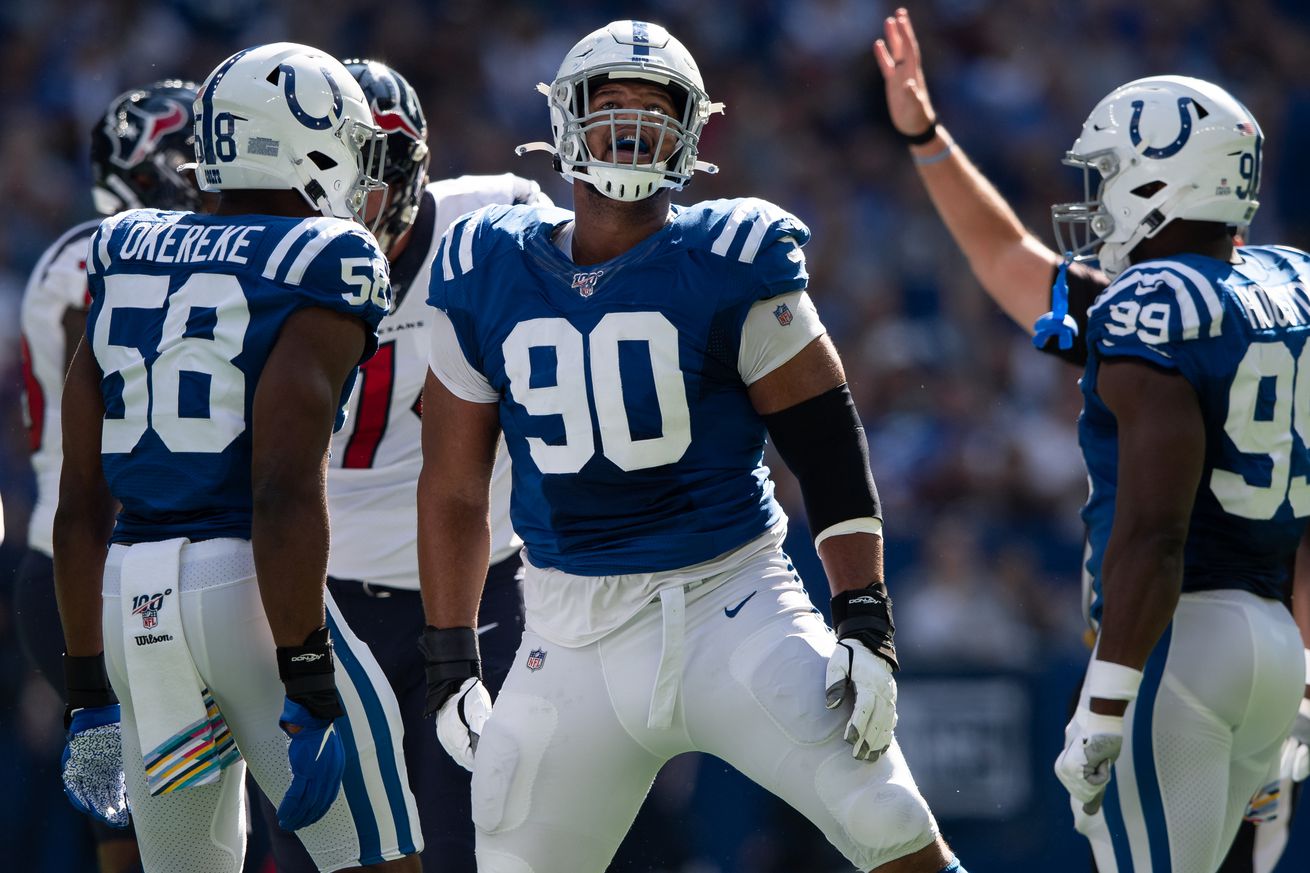 According to Pro Football Focus (subscription), the Indianapolis Colts have the NFL’s 19th best defensive line:

The Colts’ defensive front will be anchored by their big offseason acquisition, DeForest Buckner, brought over from San Francisco in a trade that cost the team its first-round pick. Buckner signed a big-money extension and will be expected to alter the entire dynamic on the defensive line. Buckner has four-straight solid to good seasons in the NFL and has racked up 208 total pressures across those four years. He is a rare athlete in terms of size (6-foot-7, 300-pounds) and length and is good against both the run and pass. His best season came back in 2017, but he has been a consistently positive force for the 49ers and should be again for the Colts this season.

Veteran edge rusher Justin Houston was quietly back to something like his best last season for the Colts, aided by a reduced role that helped keep him healthy and let him focus on getting after the passer. Houston had a top-10 pass-rushing grade (81.9) and generated 60 total pressures on the year despite playing nearly 150 fewer snaps than the year before and 300 fewer than the season before that. Houston is still likely to be the team’s primary source of edge rush pressure, though Kemoko Turay had absurd numbers in a tiny sample size last season before getting hurt, notching 14 pressures in just 69 pass-rushing snaps and registering a PFF pass-rushing grade of 91.3. Turay might have just caught lightning in a bottle for a few weeks, but he could be a surprise force for the Colts if he can come back the way he left off.

Depth is a concern for this defensive front, as outside of those star players of whom much is expected, there is a lot in the way of journeymen and average starters. Denico Autry, Al-Quadin Muhammad and Grover Stewart all return, but the highest PFF grade amongst the group in 2019 was Autry’s 71.0.

Jabaal Sheard was let go after suffering a steep decline last season, but even that decline leaves 42 pressures walking away. Ben Banogu was the team’s second-round pick a season ago, but his rookie year was ugly, resulting in a grade of just 49.0 and seeing him register only 17 total pressures on 181 pass rushes. The team needs him to take a major step forward in 2020 if this unit is to be better than average.

Freshly acquired All-Pro DeForest Buckner should anchor the Colts’ interior defensive line and provide a much needed pass rushing force along the inside—with 19.5 combined sacks over the past two seasons.

Per PFF, Buckner was their 11th best graded interior defender last year with a +81.4 grade overall. He’s a well-rounded defensive tackle against both the run and pass, who has a unique combination of athleticism, strength, and quickness (with a devastating swim move as a pass rusher). Plus, those freakishly long arms which wreak havoc!

The Colts’ top returning pass rusher is veteran Justin Houston, who led the Colts with a team-high 11.0 sacks to go along with 60 total QB pressures, 44 tackles, 13 tackles for loss, 2 forced fumbles, and 3 fumble recoveries in all 16 starts this past season.

Houston features a nasty speed-power combination and remains one of the NFL’s top sackmasters. Per PFF, he was their 8th best graded edge defender with a +87.1 grade overall—including a +81.9 pass rushing grade.

ESPN noted Houston was one of the NFL’s best pass rushers in generating pressure on 3rd downs during 2019.

Returning from a season-ending ankle injury, one frequently overlooked component of the Colts defensive line is emerging pass rusher Kemoko Turay—who was brilliant before his season was unfortunately cut short in Week 5.

The former 2018 2nd round pick of the Colts is still a bit raw, but he’s flashed his immense talent and potential already—as he was PFF’s 3rd highest graded pass rusher with a +91.0 pass rushing grade before his year ended prematurely after just 4 games.

While Turay only had 1.5 sacks, he also had 14 total QB pressures in such a short span.

The speed rusher could be a key piece again for the Colts pass rush (as there was a noticeable overall drop-off in pass pressure during his extended absence in 2019).

For Turay, it’s just a matter of staying healthy.

One unheralded piece for the Colts is their ‘nose’ Grover Stewart, who doesn’t light up the box score, but holds his own as a run stuffer, draws double teams, and eats space.

While PFF didn’t grade Stewart overly high with a +65.8 grade overall in 2019, his value to the Colts defense is much more than that number actually indicates. Trust me.

Lastly, the Colts will have to find a way to replace veteran Jabaal Sheard, who remains a free agent and is unlikely to be re-signed at this time. The versatile defensive lineman had a down year in 2019, but he was a proven defensive end against the run—holding the edge, who could kick inside on passing downs.

The Colts plan on deploying Denico Autry and Tyquan Lewis in Sheard’s old role along the defensive line—which it remains to be seen how effective that turns out to be during 2020. However, Autry is just a season removed from 9.0 sacks in 2018.

Otherwise, there’s also 2nd-year pass rusher Ben Banogu, who was a 2019 second round pick, and has shown initial promise as a young pass rusher. Al-Quadin Muhammad is a nice rotational depth piece at defensive end.

Overall, with Buckner and Houston, the Colts defensive line is better than this ranking indicates—and that’s even without a potential breakout from Kemoko Turay. The Colts should improve upon this ranking just like a lot of others after the 2020 season is done.