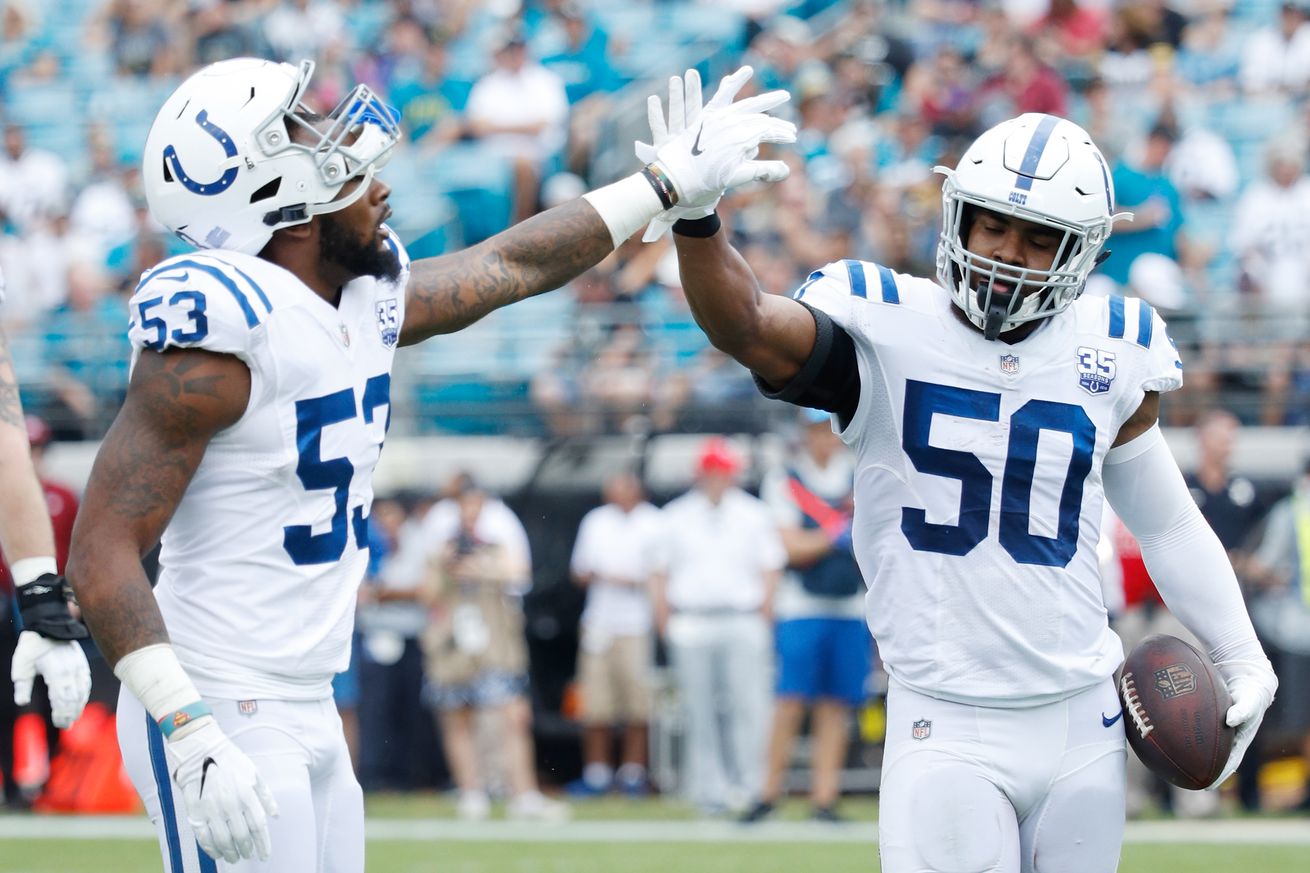 According to Pro Football Focus (subscription), the Indianapolis Colts have the NFL’s 5th best linebacker unit entering the 2020 season:

The Colts have one of the better linebacker groups in the league, led by Darius Leonard, who has been going in the second round of the 2018 NFL Draft. Leonard has the sixth-ranked grade among linebackers over the past two years and has missed just 5.6% of his tackles, good for seventh-best. A true three-down linebacker, Leonard has graded well in all phases, and his length has fit well in the Colts’ zone-heavy scheme.

Indianapolis added more length with 2019 third-rounder Bobby Okereke, who is slated to start next to Leonard after seeing 472 snaps last season in which he graded at 77.3. Both Okereke and Leonard have 97th-percentile arm length among linebackers, and that length compresses passing lanes in the middle of the field. Anthony Walker is the other projected starter and is coming off his best year in coverage, posting a 73.3 grade. The issue for Walker is his 40 missed tackles over the past two seasons, which showed up in his 43.5 grade against the run that ranked just 87th among linebackers last season.

E.J. Speed, a 2019 fifth-rounder, adds depth as an athletic backup, and Matthew Adams also returns after back-to-back years grading in the 50.0s on 332 total snaps. A couple of years ago, the Colts had one of the worst linebacker units in the league. Now, they have one of the best.

The Indy linebacking unit is no doubt anchored by 2x All-Pro (and former 2018 NFL Defensive Rookie of the Year) Darius Leonard, who’s one of the best linebackers in all of football and an NFL superstar for the Colts defense.

Just short of his 25th birthday, the 6’2”, 230 pound linebacker with long arms (34 3/8”) has drawn comparisons to former Tampa Bay Buccaneers Hall of Famer Derrick Brooks at the Colts’ outside linebacker position in their similar ‘Tampa 2’ derivative.

‘The Maniac’ is a dynamic playmaking linebacker, who can simply do it all.

Meanwhile, Leonard’s ‘partner-in-crime’ is 2017 5th round pick Anthony Walker, who’s a cerebral and instinctive ‘Mike’ for the Colts defense. Entering a contract year, Walker isn’t the most explosive linebacker, but he’s a solid and consistent starting linebacker—who’s a leader in the middle of the Colts linebacking corps.

The soon-to-be second-year linebacker was PFF’s highest graded rookie linebacker in 2019, and he was also listed as the Colts ‘key homegrown player’ for 2020—as well as was recently named to ‘NFL.com’s 2020 All-Under 25 Team’.

The Colts have to find a way to get Okereke on the field full-time in 2020—who projects more as a natural ‘Mike’ long-term. Therefore, the critical question is whether Walker will continue to start at the Mike with Okereke shifting to the ‘Sam’ this season—or vice versa.

Either way, the Colts have a talented linebacker trio, and depending on Walker’s future contract status, could very well for a long time—as Leonard (24), Walker (24), and Okereke (23) are all just entering their football prime [with the long-armed E.J. Speed (25) as an intriguing developmental linebacker as a key backup].