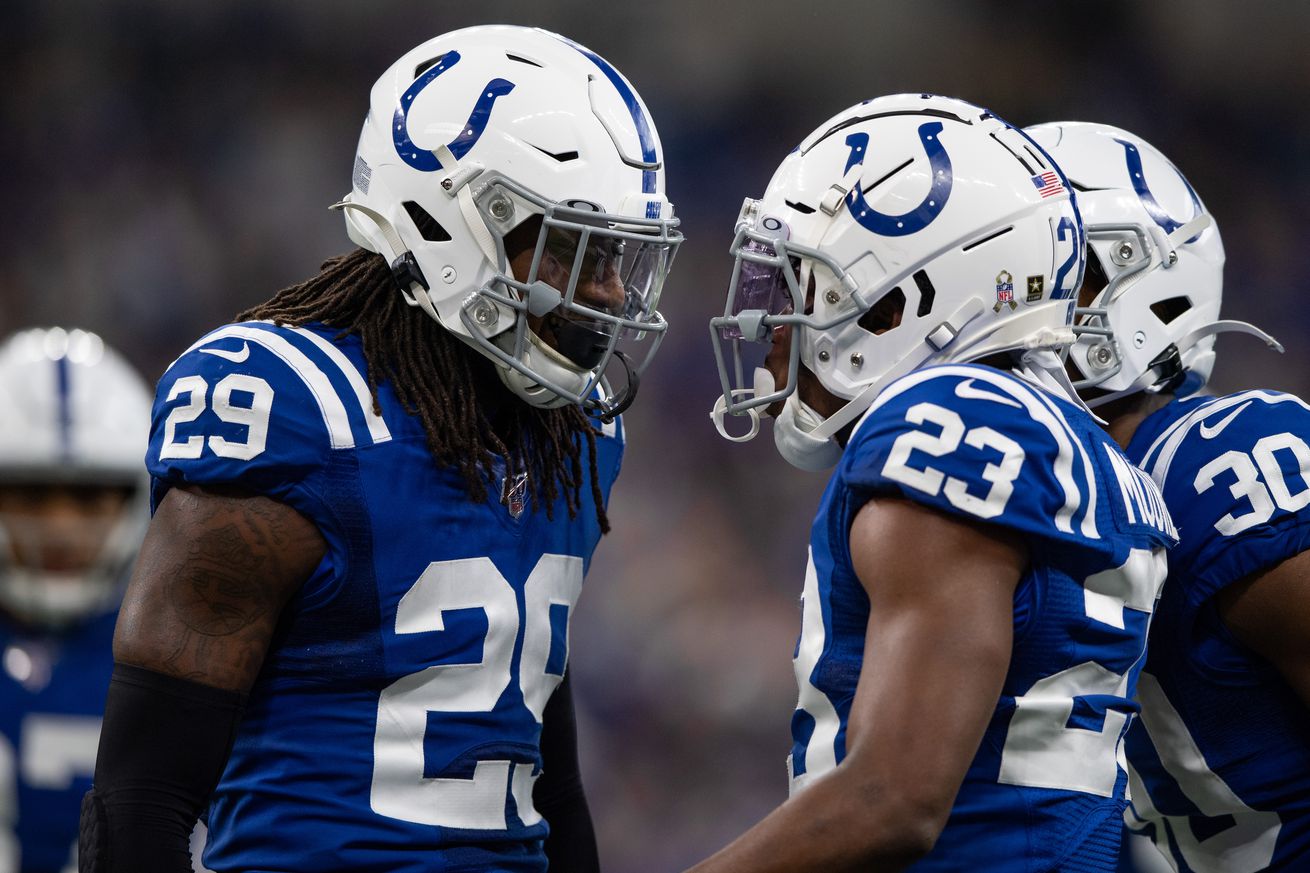 According to Pro Football Focus (subscription), the Indianapolis Colts have just the NFL’s 26th best ranked secondary among all 32 NFL teams:

The outlook for the Indianapolis Colts’ secondary rests largely in the hands of young players the team has added over the past couple of seasons, but they did bring in a veteran insurance policy in Xavier Rhodes from the Vikings. At his best, Rhodes was a top man corner in the NFL, but his best play is some way in the rearview mirror. In 2019, he allowed a 127.8 passer rating when targeted and an ugly 84.3% of passes thrown his way to be caught — numbers that only got worse in the playoffs. Unless Rhodes can show some signs he is returning to his best play, he isn’t much more than a supplementary option after the young players, but he is one with intriguing upside.

T.J. Carrie also gives the team another veteran insurance policy at corner. Pierre Desir‘s departure opens up a starting spot from last year, and the team will look for Marvell Tell III to show enough to claim that spot. Tell played 254 snaps as a rookie and had a solid 67.6 PFF grade. Given that he was converting from safety in college at USC, those early signs were encouraging, though a truncated offseason won’t help his cause.

Former second-rounder Rock Ya-Sin will be expected to step up and become a true No. 1 corner after a solid rookie season in which he was a starter all season. He surrendered two touchdowns on 56 targets and had solid grades across the board. Kenny Moore II was the best-graded member of the secondary a season ago and should remain their slot corner in 2020. Moore has improved every season of his career so far and will provide a chance for other young corners to focus on their specific roles as perimeter corners.

At safety, the duo of Khari Willis and Malik Hooker remains, and the departure of Clayton Geathers opens up snaps that could be claimed by rookie third-round pick Julian Blackmon. The Colts played around 200 snaps of dime defense last season, so depth is more important for them than it is for other teams, and that is one concern for the team on paper.

Now, PFF seems to be overly down on veteran Xavier Rhodes, who’s endured two straight down seasons and has graded out among their worst qualifying cornerbacks during that same span with the Minnesota Vikings.

The hope is that with a much needed change of scenery, a reunion with his former defensive backs coaches in Indy, and a scheme shift to more zone coverage, that Rhodes can regain his prior All-Pro caliber form—or at least be a solid starting outside cornerback again for the Colts.

Meanwhile, veteran T.J. Carrie was signed as veteran insurance for slot cornerback Kenny Moore—as the entire defense struggled in his absence last season with no natural replacement to handle the slot.

Speaking of Moore, he’s the best defensive back in the Colts secondary, and a versatile standout cornerback in the slot. He’s a serious candidate to make his first Pro Bowl in 2020.

The Colts will be heavily relying on a pair of 2nd-year cornerbacks, Rock Ya-Sin and Marvell Tell, to help fill prominent roles along the outside. Ya-Sin endured some early season lumps as a rookie before really coming into his own down the stretch. He should be penciled in as the Colts #1 cornerback as of now. Meanwhile, Tell showed initial promise as a converted safety playing NFL cornerback—with his tackling and press-man coverage.

At safety, the Colts have rock solid 2nd-year safety Khari Willis—who plays smart with instincts and is a sound tackler (although he lacks elite ball skills), and also the ballhawking Malik Hooker, as they’ll look to see more consistency from the former first rounder—who is no doubt immensely talented but entering a contract year. Rookie 3rd round pick Julian Blackmon has been praised for his versatility, but the Colts will have to wait a bit for his pro debut as he’s still recovering from a torn ACL suffered late last season.

Overall, the Colts do have a question mark in Rhodes and a number of unprovens with some young outside starting cornerbacks. However, it’s a secondary that is collectively talented and could clearly outperform this current lowly ranking during the 2020 campaign.