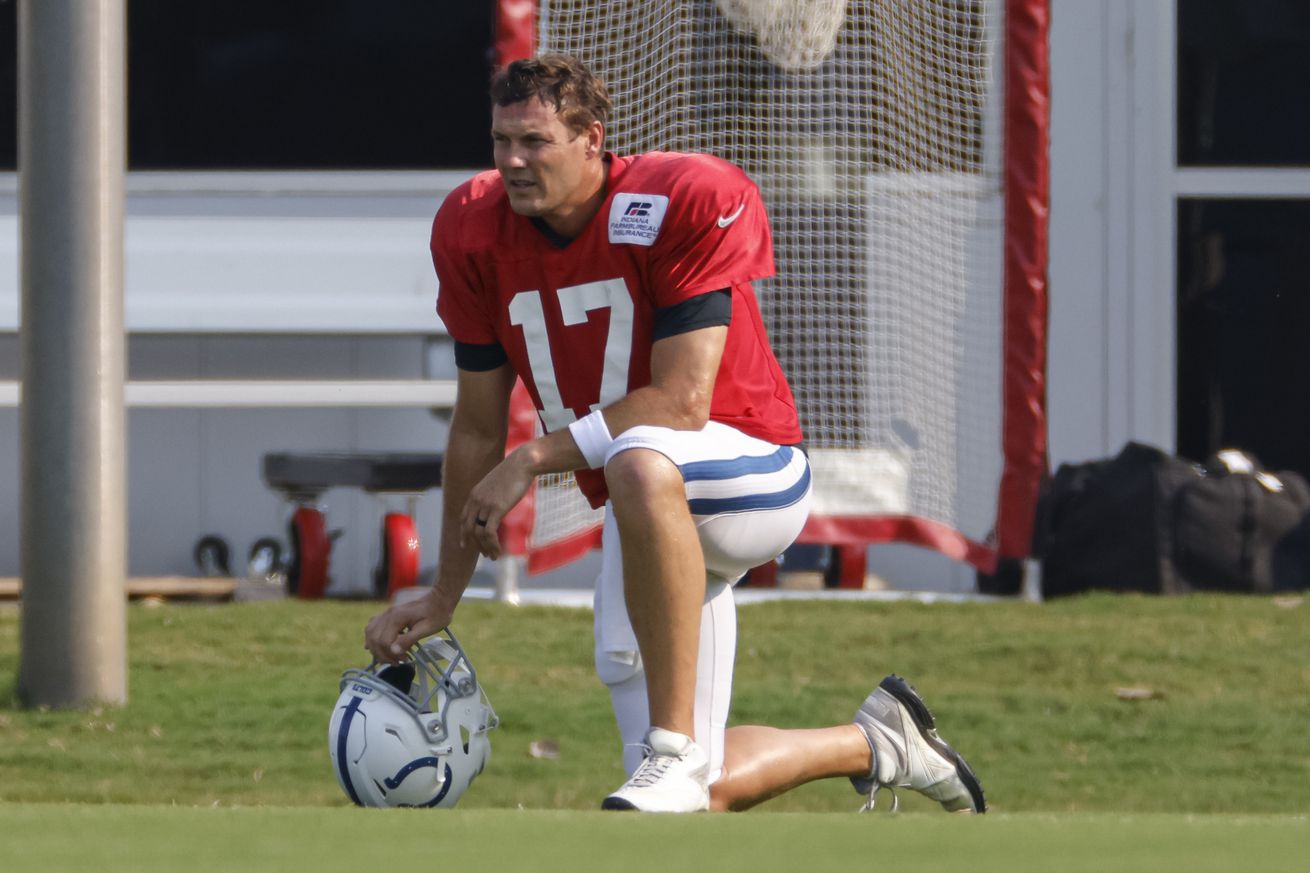 According to Pro Football Focus’ Seth Galina (subscription), new Indianapolis Colts starting veteran quarterback Philip Rivers should really benefit passing behind an improved offensive line—especially over the porous one he threw behind in 2019 with the Los Angeles Chargers:

The Colts, on the other hand, have made a concerted effort to actually get better up front. After the ritual sacrifice of Andrew Luck to the Football Gods, the new front office tried to shore up the offensive line. The biggest move was selecting guard Quenton Nelson at No. 6 overall in the 2018 NFL Draft, while they also added Braden Smith at No. 37 overall the same draft.

The Colts’ offensive line went from 30th in pass-blocking efficiency in 2017 all the way up to sixth in 2018. They fell a bit to 19th last season, but even that is still not even close to Chargers territory.

Indy’s left-side combo of Anthony Castonzo at tackle and Nelson at guard is as good as any combo in football. Center Ryan Kelly made the Pro Bowl last season after grading above 70.0 as both a pass-blocker and a run-blocker, and he looks to be ascending. And if they can continue to get plus play out of Braden Smith at right tackle, the Colts will be very stout.

Over the last three seasons, Rivers has been pressured at the 14th-highest rate (37.5%) among the 44 quarterbacks with at least 500 dropbacks in the regular and postseason. But the problem is that while the quarterbacks ahead of him either invite pressure through their playstyle (Deshaun Watson, Russell Wilson) or are just bad quarterbacks (Deshone Kizer, Josh Rosen), Rivers is trying his best not to be pressured but still couldn’t avoid it. His average depth of target over that timeframe was 9.7 yards, 35th among quarterbacks with at least 100 non-play-action, non-screen dropbacks, while his average time to throw in the same situation (2.48s) tied for the 10th-fastest time in the NFL. The man knows how to play quarterback; he just hasn’t really been allowed to.

Rivers will now sit behind a much better offensive line, and that’s not up for debate. The question is what a golden-aged Rivers can do with more clean pockets.

With the Colts, Rivers will get to pass behind an offensive line that features All-Pro offensive guard Quenton Nelson, as well as rising stars such as Ryan Kelly and Braden Smith—and veteran stalwart Anthony Castonzo on one of the league’s best units.

While he should have a slight downgrade with receiving weapons in Indianapolis, Rivers should also be given a lot more time to pass in the pocket, and the Colts won’t expect him to carry their offense like he was often called upon with the Bolts.

This should set up play-action and opportunities for Rivers passing downfield—as opposing defenses may have to commit extra defenders into the box to help stop the Colts dominant ground game.

The Colts don’t need the 38 year old Rivers to be elite, but they’ll gladly accept a pretty good starting NFL quarterback again—as the veteran is only one year removed from a 32 touchdown to 12 interception season with the Chargers in 2018.

Rivers should have improved accuracy, anticipation, and a willingness to challenge defenses deep—over his risk adverse Colts’ starting quarterback predecessor—which collectively, should lead to more big play passing potential, and scoring more points (even if it comes with more resulting turnovers).

Perhaps rejuvenated in Indianapolis (and by being reunited with Reich), the veteran gunslinger, Rivers, seems realistically poised for a renaissance season in Horseshoe Blue—backed by an upgraded offensive line.