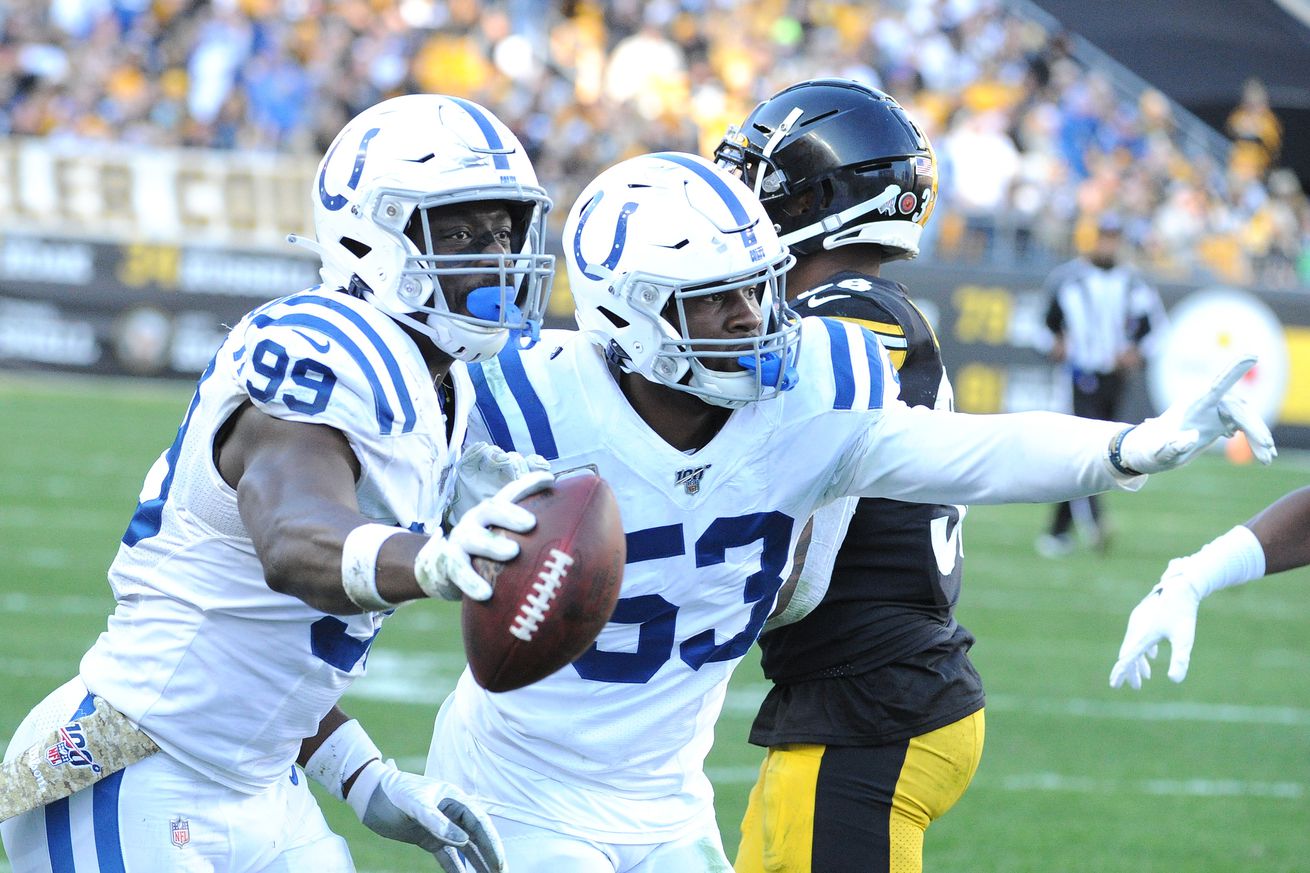 According to NFL.com’s Bucky Brooks, the Indianapolis Colts have one of the NFL’s ‘Top 5 defensive quartets’ in 2020:

Before you @ me about the Colts’ inclusion on the list, I challenge you to find a better front-seven trio than Buckner, Houston and Leonard. Their individual and collective abilities not only earn blue-chip designations, but few groups can match the overall explosiveness of their complementary games. Buckner is a monstrous interior defender with a unique combination of run-stopping skills and pass-rush ability. He racked up 19.5 sacks, 26 tackles for loss and 34 QB hits over the past two seasons with the 49ers as a heavy-handed defensive tackle. Houston remains a dangerous pass rusher off the edge in the twilight of his career. With 11 sacks last year, he hit double digits for the first time since 2014, looking spry and energetic playing as the designated edge rusher for the Colts. Leonard is a shop wrecker from the second level as a tackling machine with outstanding blitz ability and coverage skills. The Pro Bowler is a unicorn at the position as an explosive athlete with a refined game that’s built on technique, toughness and tenacity. Hooker has yet to live up to his first-round pedigree — partially due to a series of injuries — but he’s a talented athlete with supreme ball skills and instincts. If he smooths out the inconsistency in his play and stays healthy, the Colts’ defensive quartet could rival any unit on this list.

Coincidentally, Brooks also outlines a prior conversation he had with former Colts Hall of Fame general manager Bill Polian on philosophically what it takes to build a great NFL defense:

Recently on the Move The Sticks Podcast, I had an insightful team-building discussion with Pro Football Hall of Fame executive Bill Polian where we discussed the necessary ingredients of a championship-caliber defense. The five-time Pro Football Writers of America Executive of the Year told me that elite Ds must have a pair of premier pass rushers, a playmaking linebacker with hit, run and cover capabilities and a five-star player in the defensive backfield. He suggested that the secondary standout play one of the safety positions, but also acknowledged the value of a shutdown corner in today’s game.

Back in the ‘Peyton Manning’ era of Colts football, Indianapolis clearly had that with one of the greatest pass rushing tandems of all-time: Dwight Freeney and Robert Mathis, underrated defensive captain linebacker Gary Brackett, and either Bob Sanders and/or Antoine Bethea anchoring their secondary. (For a time there too, both Marlin Jackson and Kelvin Hayden were a rock solid starting Colts cornerback duo).

However, regarding the current Colts, their defense had a huge offseason addition with All-Pro defensive tackle DeForest Buckner—who should be a natural fit as a three-technique along their defensive line—with his overall penetration and disruption.

As the former 7th overall pick of the 2016 NFL Draft, the 6’7”, 295 pound Buckner has a unique combination of athleticism, quickness, and strength—with freakishly long arms (34 3/8”) and a devastating swim move that causes havoc in opposing backfields/pockets.

Still only 26 years old, Buckner is just hitting his prime and is already one of the best young defensive tackles in all of football. With 19.5 combined sacks over the past two seasons for the NFC Champion 49ers defense, he should provide a much needed interior pass rushing force for the Colts—consistently commanding double teams and mitigating coverage time.

Per PFF (subscription), the 9-year veteran was their 8th best edge defender overall with a +87.1 overall grade—including a +81.9 pass rushing grade. Houston was elite in generating pass pressure on third downs in 2019—with a devastating speed/power pass rush combination.

Next up, and perhaps most impressively, is soon-to-be 3rd-year linebacker Darius Leonard, who has quickly become one of the NFL’s best overall linebackers (and players).

Just 24 years old, the 6’2”, 230 pound linebacker with long arms (34 3/8”) has become a 2x NFL All-Pro, a dynamic playmaker at the second level of the Colts defense—who simply stuffs the stat-sheet and makes critical plays late.

Leonard recorded 121 tackles (71 solo), 7 tackles for loss, 5.0 sacks, 5 interceptions (including one for a touchdown), 7 passes defensed, and 2 forced fumbles during 13 starts this past season.

‘The Maniac’ can simply do it all—and at a high level at that, as he’s also incredibly apt against the pass—as one of the NFL’s top overall defenders in coverage.

For perspective of his instant impact (and dominance), Leonard is the only player in league history to record 250+ tackles, 10.0+ sacks, 5+ interceptions, and 5+ forced fumbles after his first two seasons in the NFL.

Lastly, is 4th-year safety Malik Hooker (although if it were up to me, versatile slot cornerback Kenny Moore would’ve rounded out the Colts’ defensive quartet instead).

The former first round pick of the 2017 NFL Draft, Hooker, has flashed his immense Ed Reed-esque ballhawking ability and range at times for the Colts secondary (with 7 career interceptions), but he has struggled with overall consistency.

He has instincts, athleticism, ball skills, and a centerfield like safety style that simply can’t be taught—which should clearly help the Colts defense win the overall turnover battle. However, he’s had some lapses in coverage, as well as some injuries to battle through.

Like Leonard, Hooker has made some clutch plays for the Colts defense late in games. It’s just a matter of whether he can consistently put it all together throughout a full 16 game season because the tantalizing talent and youth (still only 24 years old) are both readily apparent.

Entering the last year of his Colts’ rookie deal, the pressure and motivation are on for the young potential playmaking safety to have a big year for the Indy secondary.

Either way, Brooks is right that the 2020 Colts have a strong quartet of defensive players (although again, Moore would’ve been my personal preference here over Hooker—although the latter is no doubt immensely talented).

With the exception of Houston too, it’s a quartet that figures to have many great years of football presumably left for the Colts defense (depending on what ultimately happens with Hooker’s future contract status).