Carson Wentz will try and avoid surgery on his injured foot (Twitter link via NFL.com’s Ian Rapoport). If all goes well after rest and rehab, the Colts quarterback could be available for the season opener. But, if his condition does not improve, Wentz will be forced to go under the knife and miss the start of the 2021 season. 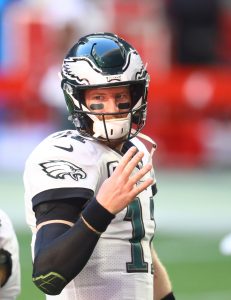 Wentz is looking to reboot his career under old pal Frank Reich. But, before he can mount his return, he’ll need to get the green light from team doctors and independent specialists. For now, he’s been kept off of the practice field.

The Colts intend to use Wentz as their Week 1 starter. But, if he can’t go, they’ll have to rely on the likes of second-year QB Jacob Eason and Sam Ehlinger. Longtime stopgap Jacoby Brissett is no longer in the fold, so the Colts are short on options.

“He’s with the docs, trying to figure what out the process is,” offensive coordinator Marcus Brady said last week. “[We’re] still evaluating what the next move is, how bad it is. Then we’ll go from there.”

Wentz was once considered one of the league’s best young quarterbacks. However, it’s been a while since his Pro Bowl nod in 2017. His final year with the Eagles was a mess and resulted in Jalen Hurts ascending to the starting job. Hurts was first-string for four of his 15 games, completing 52% of his passes for 1,061 yards, six touchdowns, and four interceptions. He also added another 354 rushing yards and three touchdowns on 63 carries, prompting the Eagles to trade him to the Colts for a package of draft picks.

The Eagles received a 2021 third-round pick and a conditional 2022 second-round for the QB. That conditional choice could turn into a first-round selection if Wentz plays 75% of the snaps or 70% with a playoff appearance.