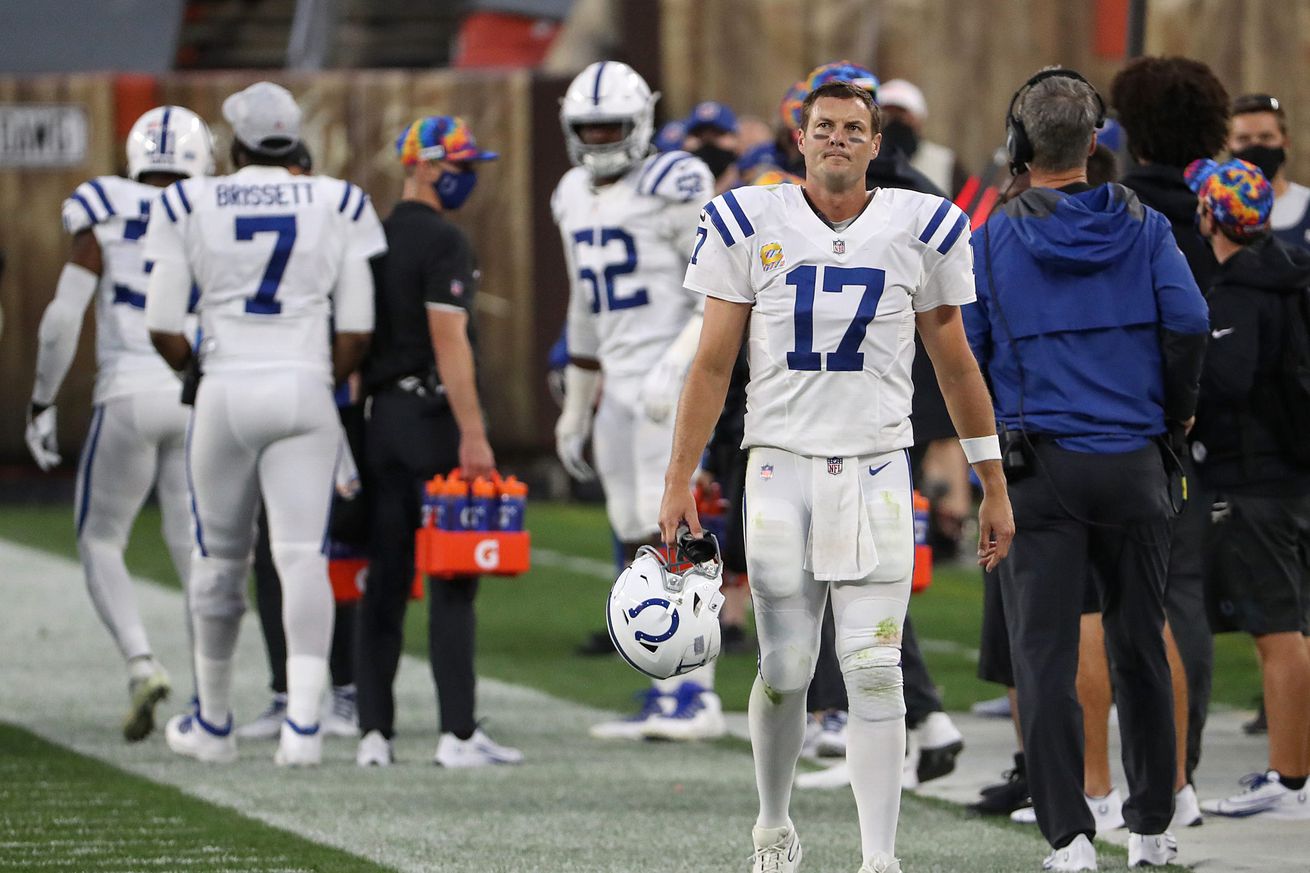 The Indianapolis Colts are a day away from their bye week — time the franchise can use to allow injured players to get healthy and to get closer to full strength. The locker room can’t be looking forward to the bye, however, as last week’s loss to the Cleveland Browns has made a home game against the visiting Bengals even more important.

While some fans might think this game has a predetermined outcome, pitting a rookie quarterback who has had his share of struggles against a team that is further along in its development, the NFL doesn’t work that way. Every down and every play can make a difference in a game’s outcome and fortunes can turn quickly on the gridiron.

How can the Colts take care of business at home and get to their bye with some momentum?

Frank Reich, Nick Sirianni, and Rivers need to figure out what kind of offensive identity they need to establish and stick with it. If this is a team with a devastating offensive line and a potentially dominant ground game, it’s time to feature that attribute.

What Rivers and the offense needs to avoid is trying to be something they’re not. At this point in the season, it will take a resurrection for The Ghost, T.Y. Hilton, to regain his dominance. The rest of the receivers are somewhat patchwork. Zach Pascal showed he can be effective in a bigger role a season ago but the unit is really thin on both talent and experience. Jack Doyle has looked slower than normal and has been uncharacteristically mistake prone in the running game.

In short, the Colts are not currently and cannot force themselves to be a dominant passing team. It will take more time, additional reps, and likely some players to get healthy before they can hope to achieve better offensive balance. The last thing Rivers should feel that he needs to do is to place the team on his back and try to make something happen under those circumstances.

Know and be true to your identity, and be careful with the football.

Rivers has a long and healthy history throwing to tight ends in his career. Perhaps no tight end on the roster has a skillset closer to those who have been Rivers’ favorite targets than Trey Burton.

Burton has struggled with injuries over the last couple of seasons and faced a bit of an uphill battle in terms of building rapport and getting reps on offense. However, Burton also has a lot of potential and has proven an ability to be a strong receiving tight end. Late in the game against the Browns, Burton was targeted frequently by Rivers. Some of that was due to the Browns allowing short passes to keep the clock moving but some of it might also be because Burton started to get Rivers’ attention and to build some trust.

When your team is currently sporting a veteran receiver who hasn’t shined as brightly as he has in the past, a veteran tight end who used to serve as a security blanket and who is now looking slower and more prone to making mistakes, and a piecemeal unit of other pass-catchers who don’t have a lot of experience, you need to have someone who can step up.

Burton seems like the most likely candidate under the circumstances.

There is little doubt that the Colts have one of the most talented and deepest defensive lines in the NFL. DeForest Buckner’s impact to this point in the season is so strong that his name is included in early talks for Defensive Player of the Year. Grover Stewart has flown more under the radar but has played an important role next to Buckner. Justin Houston has produced each week in part due to the internal push generated by his teammates. Even Denico Autry has looked good taking over for Jabaal Sheard as the power end.

The issue is that the defense hasn’t found a way to turn reasonably consistent pressure into a lot of sacks. Some of that could be bad luck and might correct itself over time. It’s also possible that rushing with only the front four is not going to get the job done until the unit gets another edge rusher like Kemoko Turay back onto the field.

In the meantime, Matt Eberflus needs to take advantage of the defensive talent he and Chris Ballard have compiled. This defense has incredibly strong linebacker play and promising safeties. The corners are good at limiting big plays and have been actively knocking the ball away from intended receivers. This is a stingy defense built on a set of principles that makes it hard for opponents to put the ball into the end zone.

With a defense that is at or near the top of the NFL in every meaningful category, one could arguably show a bit of confidence. In that, Eberflus could start games being mercilessly aggressive on defense and likely be rewarded for doing so. Don’t wait until your back is against the wall to dial up blitzes or get creative to create pressure. Come into the game with ears pinned back and with the intention of bullying the opponent.

If the Colts defense can play with the kind of aggressiveness it showed in the second half at Cleveland all the time, Rivers and Reich will have a pretty easy job on offense.