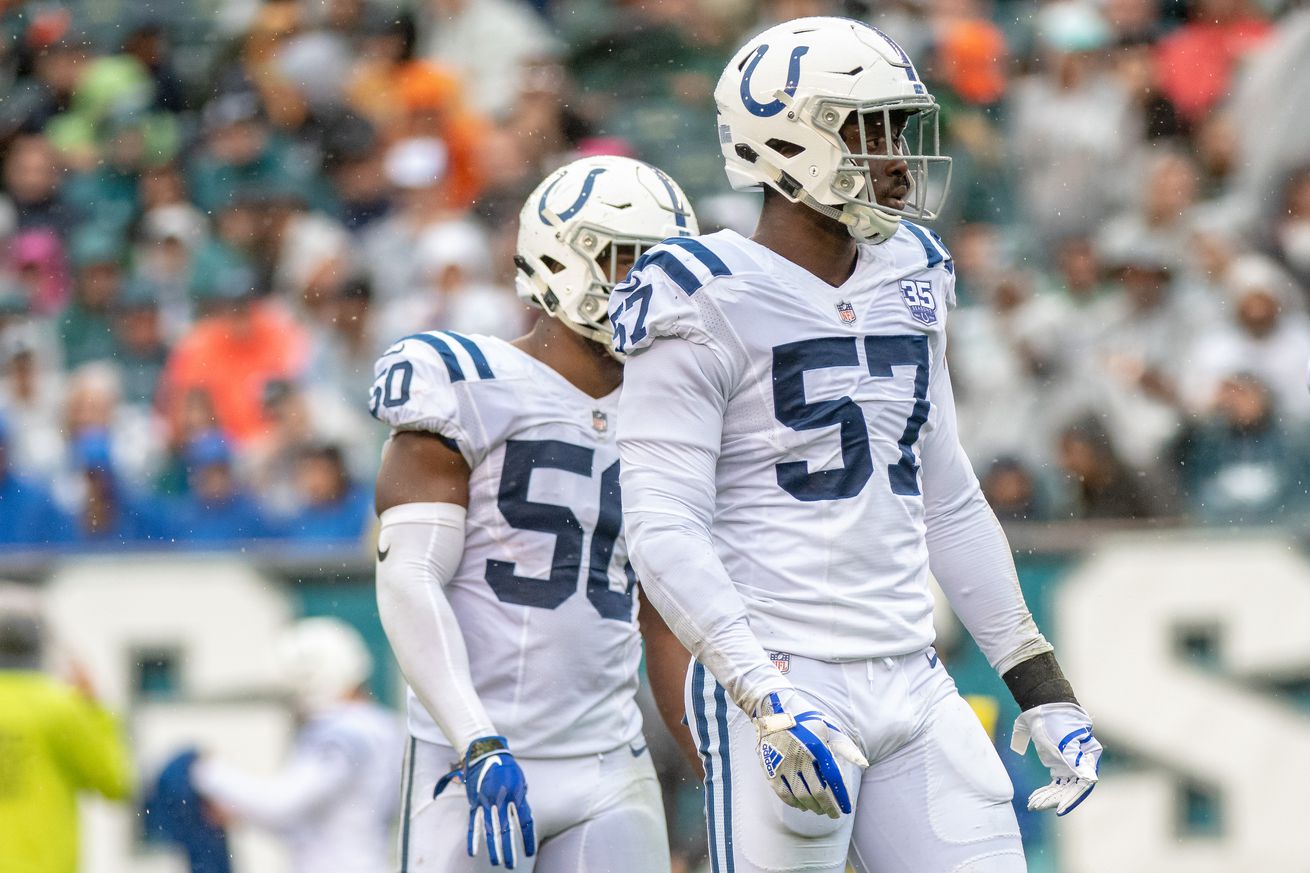 Turay is ready to bounce back after his injury in 2019

On the surface, 2018 looked like a great rookie season for Kemoko Turay. In his first season of NFL action, he was able to total five sacks, seven quarterback hits, and 26 hurries as a sub rusher (according to Pro Football Focus). He also led the all defensive linemen on the Colts with a pass rush productivity percentage of 8.6 (this number was also good for 13th best in the NFL among defensive ends). For Turay though, his rookie season just wasn’t good enough by his standards.

“In my rookie year, everything was obvious. I was using so many moves that if you asked me what moved I liked using the most in 2018, I couldn’t tell you.”

He reviewed all the tape from his rookie year and came away with some areas that he felt that he really needed to improve in to be successful going forward. The first step he took in improving on these flaws is staying in Indianapolis during the offseason and training with his mentor and Colts legend Robert Mathis. Mathis quickly went to work in helping Turay narrow his focus as a pass rusher and learn to focus on perfecting a few moves rather than being decent at every move.

From there, this is where Turay really credits the beginning of his breakout campaign in 2019. He worked tirelessly with Mathis to take his game to the next level and develop the consistency he needs to be a top edge rusher in the league. Turay had this to say about his work with Mathis in the offseason leading into 2019:

“It started with staying in Indianapolis and training with Robert Mathis. Coming out of college, I had different tools but I didn’t know how to set up my rush. That is where Rob came in and taught me how to be consistent and not telegraph my moves.”

The work in the offseason paid off as Turay exploded during the first five games of the 2019 season. He registered 1.5 sacks and had a pressure or quarterback hit on over 20% of all of his pass rushes on the season. He was disrupting opposing offenses on nearly every single play he was on the field. The biggest reason for this success on the field? Always being in attack mode as a pass rusher.

Turay brought that attacking mentality to every pass rush rep last season. Look at this play on what would have been his first sack of the season if it weren’t for an offsides call on Justin Houston. Turay closes the angle quickly and attacks downhill on the left tackle. He then uses his elite traits and bend to get around the corner and make the play.

While always attacking offensive linemen is a good thing, it isn’t always feasible for players of Turay’s size and stature. For instance, as a rookie he had issues with holding up against the run and staying upright in his pass rushes due to being a bit of a smaller player. Turay acknowledged this flaw in his game and worked at it as well in the offseason.

“I was working on my hands but I was also working on my core a lot. I would get pushed off the ball a lot in 2018 when offensive linemen would attack me with full force. In the offseason, I worked with my strength coach Rusty and we worked on my core and my lower body constantly.”

That improved core really did wonders in Turay’s game as well. While he may never be a stout run stuffing defensive end, he made it so he wasn’t a liability whatsoever in that area in 2019. It also really helped him stay upright when offensive linemen would punch at him in pass rushing situations. Adding strength and muscle to his core was vital and shockingly he didn’t even have to add more overall weight to his frame to do this. The results were a stronger Turay who still had the athleticism to be a force as a pass rusher.

The last and arguably most important point of emphasis for Turay last offseason was to become a better salesman, which comes back to the initial point we talked about when working with Mathis in the offseason. When I say becoming a better salesman, that means truly selling everything about his rush to offensive linemen to gain an advantage. Look at how Turay sells the speed rush here to set up the long arm.

“You gotta sell speed before you make your initial move.”

“I’m not trying to telegraph my move. I’m trying to make it harder on the offensive lineman by making every move look the same.”

Those were the keys to success for Turay heading into 2019 and in the games he played, he accomplished them. He looked at his rookie season and was not happy with the results. He set out to improve his core strength and work on his lower body as a result. He also worked with a future Hall of Famer almost every day in the offseason to develop a better plan of attack. He went from a raw rookie trying every move he can think of to being a nuanced salesman who leaves linemen guessing on every snap.

From talking with Turay, he truly comes off as a master of his craft so his success last season really wasn’t shocking. Unfortunately we were all robbed of seeing what his season could have turned into as he broke his leg in week five against the Kansas City Chiefs.

While it was disappointing to see his hot start end the way it did, this hasn’t deterred Turay in anyway from his goal. He has still been working with Mathis this offseason only this time he has been with fellow defensive linemen Ben Banogu in his workouts. While he is still currently on the PUP list, he is nearing a return. Turay is just excited to get back on the field and play alongside his new teammates, namely ALL-Pro Defensive Tackle DeForest Buckner. Here is what he had to say about the addition of Buckner in the offseason.

“It’s going to be very great. He’s going to push the inside while I’m coming around the corner so it makes my job easier. Seeing the impact that Justin Houston had last year, imagine now having two impact players on the line. It just makes my job so much easier.”

On top of adding Buckner to an already solid defense, the Colts brought in an experienced Defensive Line Coach in Brian Baker to run the show up front. Baker is a coach who has been around the game for a long time and has worked with a ton of top pass rushers in Kevin Williams, Julius Peppers, Ryan Kerrigan, DeMarcus Ware, and Leonard Little.

According to a source I trust, I was told earlier in the offseason that the main reason Baker was hired was to develop and play the young pass rushers on this team this upcoming season. Turay has met with Baker a few times already and is already loving his fit in Indianapolis:

“We’ve spent hours watching film. (Baker) loves what he sees in me last year. He has no doubt that I could continue to get better. I like him a lot as a coach and from what he’s shown so far, he’s terrific. There are things he’s telling me that I’ve never even heard before so I know he’s going to help me expand my knowledge of football.”

Overall it is hard to not get excited for Kemoko Turay and his potential in 2020. He put a lot of work in the past two offseasons to go from a raw pass rusher to someone who truly knows and understands his craft. He is now confident as a rusher and understands what it takes to beat opposing offensive tackles. That knowledge along with the added talent of Buckner and the added coaching of Baker could be a lethal combination in 2020. Turay has one last message though to the Colts’ fanbase before we kick off this next season:

The expectation is still the same. What you see in 2019 is going to be a continuation, if not better. I’m just going to be where I left off.

Watch out for the arrival of Kemoko Turay in 2020 Colts fans.

I am ready for Kemoko Turay to get back on the field for the Colts in 2020. After getting his feet under him as a rookie, he was insane in the first 4 games he played last year.

On 20% of his pass rushes last season, he had either a sack, QB Hit, or hurry. Breakout candidate: pic.twitter.com/j8WijqF4f7