The Indianapolis Colts used the No. 21 overall pick in the 2021 NFL draft to select former Michigan edge rusher Kwity Paye.

This was the best-case scenario for the Colts, whose biggest need entering the draft was edge rusher. Paye is an elite athlete on the edge likely to work as a defensive lineman with his hand in the dirt.

Given the need at edge rusher and Paye’s upside on the strong side of the defensive line, this is an excellent pick for the Colts. Paye can come in right away and make an impact while developing his pass-rush plan and counter moves.

Paye checks just about every box that Chris Ballard wants with his edge rusher. He’s an elite athlete, producing a 9.34 RAS, which ranks 10th among all edge rushers in this class. 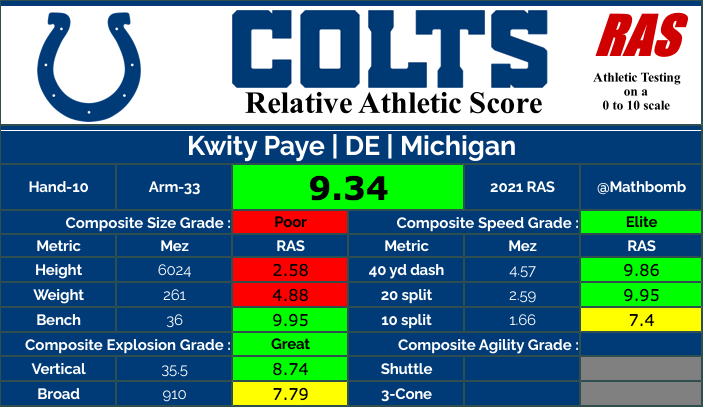 When looking at Paye’s production during his time at Michigan, it isn’t fully indicative of the type of edge rusher he can be. Michigan didn’t completely use him as a full-time edge rusher and sometimes had him aligned on the inside shoulder of the tackle.

The Colts won’t make that mistake. Paye’s burst, athleticism and length should allow him to thrive in the aggressive, one-gap front that Matt Eberflus implements on Indy’s defense.

Paye will be joining a trio of young edge rushers for the Colts, a unit that has a lot to prove in 2021. Given that he’s likely to be working more on the strong side of the formation, Paye shouldn’t be stealing snaps from Kemoko Turay or Ben Banogu, both of which face big prove-it seasons.

Though the Colts may have been looking to trade back, they are able to address their biggest need with arguably the best edge rusher in the entire class.

As it stands after Round 1 of the draft, chalk this up as another win for Ballard and his draft room.