The Indianapolis Colts used the No. 127 overall pick in the 2021 NFL draft to select former SMU tight end Kylen Granson.

After spending the first two picks of their draft on edge rusher Kwity Paye and defensive lineman Dayo Odeyingbo, Chris Ballard stays put with his fourth-round pick to grab an athletic tight end. 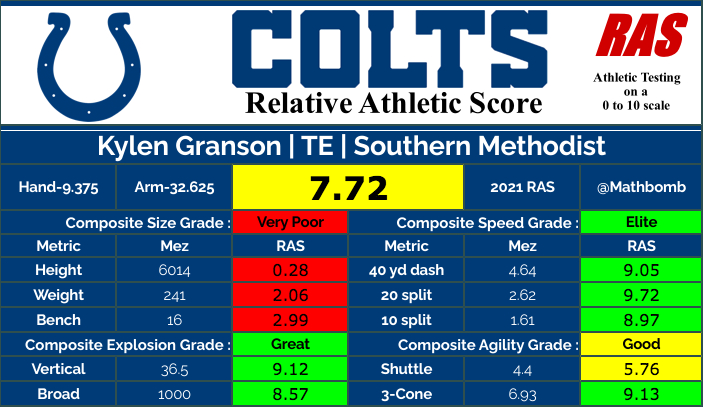 The Colts were thought to be interested in a tight end. With Jack Doyle and Mo Alie-Cox as the only solidified pieces of the room, Granson should be expected to work as the move tight end in the formation.

We have seen Frank Reich utilize the hybrid role (H-back) with the offense before. They did so with Ryan Hewitt in 2018, though he held more of a blocking role. Granson offers more as a receiver, evident by his 16.1 yards per reception in the last two seasons.

Draft analysts have cited some weaknesses including focus drops and consistent blocking at the attack point.

Granson has the versatility to work inline, in the backfield or in the slot as a receiver. Though he hasn’t been cited as working much on special teams, Granson is likely going to have to prove himself in that role with the Colts.

He will likely be competing with Noah Togiai for the TE3 role in the room behind Doyle and Alie-Cox.