The Indianapolis Colts used their fifth-round pick in the 2021 NFL draft to select safety Shawn Davis out of Florida.

Davis joins a defensive heavy draft crop for the Colts in 2021. They used their first-round pick on edge rusher Kwity Paye, their second-rounder on defensive lineman Dayo Odeyingbo and their fourth-rounder on tight end Kylen Granson ahead of this pick with Davis.

The Florida product is a twitchy athlete who worked mostly as a free safety with the Gators. Though he pulled his hamstring during the 40-yard dash at Florida’s pro day, he showed off some explosiveness in the vertical and broad jumps. 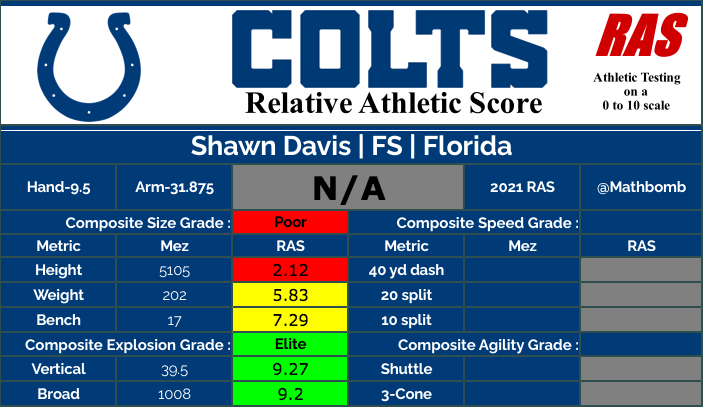 Davis fits the Colts well given his athleticism and character as a leader on the Gators defense. He will be working as a depth piece behind starters Khari Willis and Julian Blackmon and with veteran Sean Davis and Rolan Milligan.

Davis makes plays on the ball, evident by his five interceptions over the final two years at Florida, which was the most for their defense during that span.

One thing the Colts will have to keep an eye on is his injury history. Davis has dealt with injuries throughout his career at Florida and will be something to watch during his time with the Colts.

It was expected that the Colts would use one of their Day 3 picks on a safety and given his athleticism, he could provide solid depth.