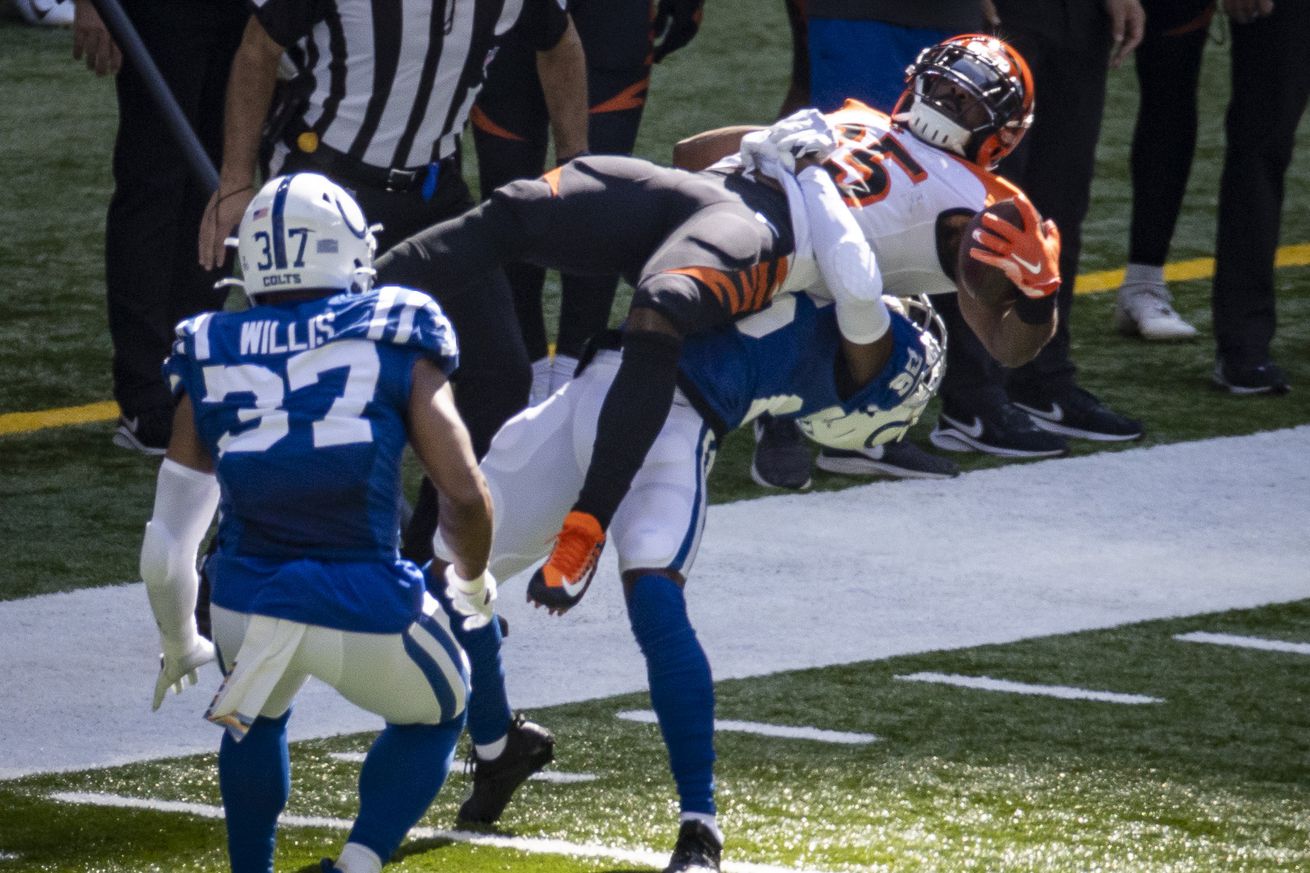 This game didn’t go how anyone thought it might. The Bengals jumped out to an early 21-0 lead before Philip Rivers (the same Philip Rivers from the first five weeks) took over the game for the Colts and battled his way back into the game.

This was the most frustrating and exciting game the Colts have played in quite some time and in the end they came away with the win. Sitting here typing this just minutes after the game has ended, I’m not sure exactly what lessons we take away from this game. It was just such a departure from everything we’ve seen before today, I’m not sure what it means but it has to mean something, right?

Things went well on the first play of the game

Jonathan Taylor finished the day with 115 all purpose yards including a 5.0 yard per carry average. The game dictated that the Colts throw the ball for most of the day but Taylor, quietly had another nice day.

Jack Doyle just dropped this ball. He caught it, turned and fumbled. I don’t know what to say about it other than maybe he got spooked by how much green grass was in front of him, because it was a lot.

The defense struggled early on

The Bengals had a short field but this was the first touchdown the Colts have given up on the first drive of the game.

Rivers killed it to this and you could hear a Bengals defender say “Ah, it’s a run, right”#Colts#Bengals#ForTheShoe#SeizeTheDEY#CINvsIND pic.twitter.com/wLIC7g1hdx

Not having many fans in the stands has led to some interesting things being picked up on audio that we normally wouldn’t hear. Curse words aside, we’ve heard a lot of pre-snap chatter including before this play. I don’t believe I recorded it but during the game you could hear a Bengals defender call out that the Colts were audibling to a run. He was correct and they made the run stop short of the first down.

Everything’s fine. It’s all fine. No problem. Right where we want them. Fantastic. #Colts#Bengals#ForTheShoe#SeizeTheDEY#CINvsIND pic.twitter.com/whSVfEWAj5

Things were going about as bad as they could have gone to start this game.

Please excuse my grammar. I’m aware unreal is one word.

The officials were bad today, but for a little more than a quarter the Colts were worse. Also T.Y. Hilton had a really nice day (save for one bad drop) it’s just all of his catches were called back on really cheap penalties.

The Ravens blitzed the Bengals with great success, they just didn’t send a DB from a mile away to get there. #Colts#Bengals#ForTheShoe#SeizeTheDEY#CINvsIND pic.twitter.com/7yW7HBB5j8

This blitz wasn’t great, it took far too long to get there, blitzing a DB from the wide side of the field is possible but it didn’t work out on this one. Also, Rock Ya-Sin gave up a couple of big plays in this one. He also made a couple of nice plays. The Bengals receivers are actually really good, but this one was on Rock.

First play of the second

At this point I was questioning why I keep watching football.

When you’re down 21-0 might as well throw the challenge flag. At least you might win SOMETHING today. #Colts#Bengals#ForTheShoe#SeizeTheDEY#CINvsIND pic.twitter.com/nvCgOoR0Qh

Called incomplete on the field and was ruled there wasn’t enough evidence to overturn. Seemed like a catch to me.

It was at this point Philip Rivers forgot he was old

Rivers hit Marcus Johnson for a big play that ended near the goal line. Johnson had five catches for 105 yards today. He’s the first Colts receiver to have 100 yards this season.

I don’t care how it happened I’m just glad they didn’t get shut out. #Colts#Bengals#ForTheShoe#SeizeTheDEY#CINvsIND pic.twitter.com/vQQnTUsyaK

Trey Burton finally looked like the guy that Frank Reich described when the Colts signed him before the season. Burton ended up with four catches for 58 yards and two touchdowns.

Someone woke up the defense

I’m not sure what spurred it but it was around this time that the defense realized a game had broken out and they should start playing in it.

Apparently this was DB purge week in the NFL because they were getting away with muggings all over the field.

Rivers changed this play at the line and they got Jonathan Taylor wide open with a blown coverage. Ultimately it was a good call from the 87 year old Rivers.

His second touchdown on the day

Rivers is dealing. We’ve waited 6 weeks and it took being down 21 points in the 1st quarter to the Bengals to see it. But we’re seeing it. #Colts#Bengals#ForTheShoe#SeizeTheDEY#CINvsIND pic.twitter.com/EZaKBopwuQ

Burton made a great play, Rivers threw a great ball, it resulted in six points and all of a momentum seemed to be changing.

Johnson found a hole in the zone, sat down and Rivers found him for the first down. In weeks passed third down was little more than a notification that Rigoberto Sanchez would soon be on the field. Today, it was Rivers time to shine.

Passing just doesn’t get much better than this.

Rivers was on another level

This half has been a rollercoaster of great and terrible play.

Let’s just let Uncle Phil chuck it up the rest of the season to a bunch of undrafted receivers.

Zach Pascal did a great job going up and getting this ball for six. It felt like the Colts just decided to win. Even though they were still behind it felt like their game to lose.

Special Teams has been outstanding

No matter what unit is struggling, offense or defense it seems that special teams is consistently excellent this season. The second half started with a great kick and an amazing individual effort to actually make the stop inside the 15 yard line.

The Colts defense had a really rough first quarter and have been a lot better since. Need this to continue. #Colts#Bengals#ForTheShoe#SeizeTheDEY#CINvsIND pic.twitter.com/YhMH8wF162

The second half started as well as the first half was bad. Wait…

It simply cannot get any better than this. Rigo is punting at an all-pro level.

Defense gets another stop

DeForest Buckner weighs just shy of 300 pounds. Here he chases down a running back from behind. He’s a very good athlete.

I just wish he hadn’t run over our best receiver at the end. #Colts#Bengals#ForTheShoe#SeizeTheDEY#CINvsIND pic.twitter.com/l9RoiPzak1

This run design is a very cool trap using the tight end and the left tackle. Ryan Kelly works to the linebacker and the rest is history. Cool design, well executed, big gain.

This was just an outside run that the Bengals didn’t bother setting the edge for. Taylor did a good job getting to the outside and picking up a bunch of easy yards.

Defense coming up again and again

Tyquon Lewis had a great day with multiple tackles for loss. Although he probably owes Grover Stewart dinner for clogging up the inside all day long.

The Colts did a great job getting Buckner the 1 on 1 matchup they wanted. #Colts#Bengals#ForTheShoe#SeizeTheDEY#CINvsIND pic.twitter.com/dXTigdH5xo

Most of the day the Bengals were in very manageable situations on third down. They opted to go with short, quick hitting throws. The Colts couldn’t work their line into highly favorable positions due to the fact that if you leave this kind of gap on a 3rd and 4, the Bengals just had it off and pick up 5 yards at a minimum. On this third and 12 the Colts overloaded the right side of the offensive line and got DeForest Buckner one on one with a guard that has no business blocking him alone. The result was this sack.

Bad Phil shows back up

Well we got 2 full quarters of good Philip Rivers. Those were fun times. #Colts#Bengals#ForTheShoe#SeizeTheDEY#CINvsIND pic.twitter.com/7Lj0KoEVLA

Philip Rivers throwing interceptions doesn’t bother me. They don’t bother me as long as he’s throwing a lot of touchdowns too. Until today the touchdowns weren’t coming in droves. This wasn’t a good decision and it could have cost the Colts the win, but once again, the defense came up big.

There’s no way I’m calling a fullback dive on 3rd and 1 against the 2020 Indianapolis Colts. It’s just not a high percentage play. The Colts got it stopped.

First missed kick against the Colts in 21 attempts

I love it when the doink goes our way#Colts#Bengals#ForTheShoe#SeizeTheDEY#CINvsIND pic.twitter.com/MB4Dg7W1B0

Please note that stat is one I saw on Twitter. I didn’t verify it but it sounded good so I went with it.

IDK if you guys are seeing this but Frank Reich got his groove back. #Colts#Bengals#ForTheShoe#SeizeTheDEY#CINvsIND pic.twitter.com/mQv5X6gene

The Colts used some traffic to get a tight end wide open for a big gain. This play would set up a 40 yard Rodrigo Blankenship field goal to put the Colts up by four points.

The Defense makes one last play

Julian Blackmon continues his streak of being a very impressive rookie by ending any hope the Bengals had of winning this game.

A win is good to get no matter how it comes but this game was ugly early on. Again I’m just not sure what you take away from this game. It’s bad they came out flat, it’s good they were able to adjust and overcome, but ultimately I’m just not sure it means much.

The one thing that was absolutely impressive today was the play of Philip Rivers. The Colts were down by 14 points before he really got a chance to throw the ball down the field. He had the one pick but on a day like today, it’s hard not to take the bad with all of the good. We know Rivers can do this, now it comes down to Reich letting him try to build on this performance by keeping the playbook open and letting the offense live and die with Rivers. I’m not saying I love the idea but we’ve seen what the offense is like when Rivers is a compliment to the run game and it just doesn’t work.

I suppose we learned something after all, this is Philip Rivers team and for better or worse as he goes, so do the Colts.