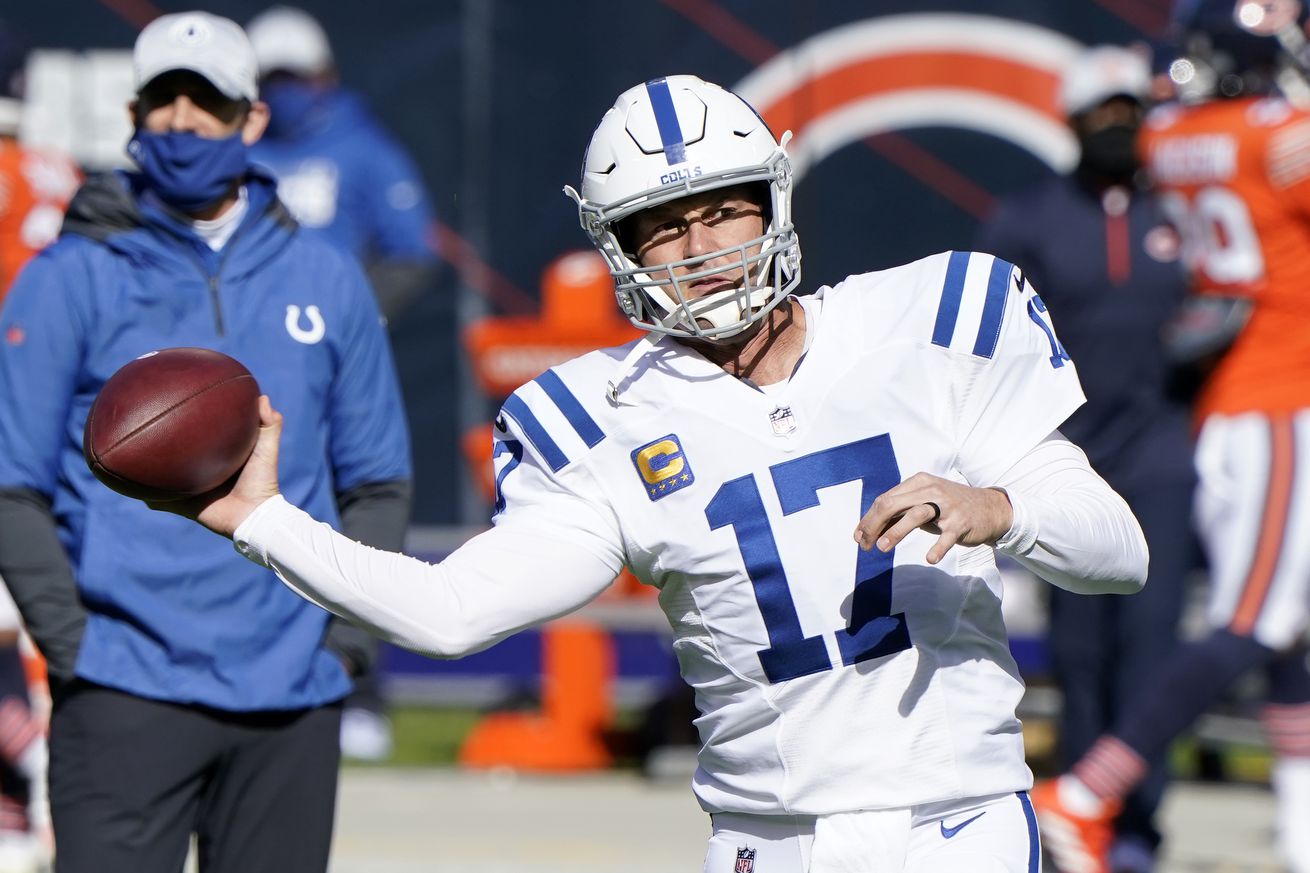 This game probably isn’t one that you’ll ever tell your grandkids about. It was a slow moving defensive battle that saw the Colts offense struggle and the Colts defense looked elite. Unfortunately this game may have serious consequences for the rest of the season as we saw multiple Colts miss time in this one due to injury. It was an ugly game, there were potentially ugly injuries but the Colts got a win and ultimately that’s what matters.

DeForrest Buckner is a game changer for this defense. He’s nearly unblockable and on plays like this one even if the offensive lineman gets an initial push, Buckner manages to find a way to make a play.

Some good, some bad

Xavier Rhodes with the nice play to get the stop on 3rd down. Colts offense has to make it happen now. #ForTheShoe#DaBears#INDvsCHI pic.twitter.com/17uGyhx23e

Xavier Rhodes, the reigning AFC defensive player of the week, didn’t have another day that’s going to earn him any awards, but the first year Colt broke up a couple of passes and wasn’t a liability.

Chris Ballard drafted Jordan Glasgow because of what he did for the Michigan Wolverines special teams units. So far that’s proven to be a great use of a sixth round pick. Here Glasgow gets the block and he flashed later in the game as well.

For much of the day Philip Rivers seemed out of sync with his receivers and the offense as a whole didn’t play that well. This play was a different story as he found Zach Pascal after running a deep crossing pattern to beat the Bears defense. Good throw and catch on this one.

That play led to this

This was close to being a pick from Pascal, I believe. Either way Mo Alie-Cox makes the grab and gets in for another touchdown, his second on the season.

The secondary was very good

This was the next Bears drive after Rhodes batted down their last third down attempt. Unfortunately Rock Ya-Sin went down with a non-contact injury late in the fourth quarter. He was able to walk off on his own power, let’s all just hope for good things, because when he was on the field with Kenny Moore II and Xavier Rhodes these DB’s were very, very good.

Doesn’t matter how it happens

Another 3rd down stop for the Colts defense. Offense has to score points here. #ForTheShoe#DaBears#INDvsCHI pic.twitter.com/VcWpdJf0xV

All that matters is that the Colts got the stop on third down. I’m not sure why Nick Foles was so far off on this throw. It could have been his left guard, James Daniels getting pushed towards him at a quickening pace or it could just be Foles just threw a bad ball. Rhodes may have made the stop before he got the first, but with the bad pass, it wasn’t an issue.

Sometimes you get beat. Rhodes came from a system with the Vikings that put him in a lot of man to man situations and he struggled. So it’s no surprise that he might give up a long pass in a coverage that he tends to struggle with. The vet still had a nice day overall.

That play led to this

It doesn’t matter how it happens. The Colts got the 3rd down stop but Foles with that throw…. yikes#ForTheShoe#DaBears#INDvsCHI pic.twitter.com/UybiNov6XK

Again, it doesn’t matter how it happened, Foles just missed. The Bears settled for three and these would be the only points Chicago would score until the final two minutes of the game.

T.Y. Hilton has been quiet this season but the past two weeks he has been very effective when called upon. Rivers spreads the ball out quite a bit and the passing game hasn’t been great anyway so naturally Hilton’s opportunities have been few and far between. Here he makes the most of what he’s given and makes a tough catch with a defender all over him.

The run game was lacking

Jonathan Taylor finished the day with 17 carries for 68 yards which is good for 4.0 yards per carry. This was a nice run but far too often the Colts offensive line was unable to generate movement up front. The Bears do have a talented front seven but they had struggled against the run until today. This far the line has protected for Rivers very well but they’ve yet to be dominate on the ground in 2020, something we all expected them to be. This is something we’ll have to watch going forward.

Taylor used his vision and strength to bounce this run outside before carrying defensive end Robert Quinn for seven yards after he made contact.

Colts fans haven’t seen much of Jack Doyle lately but here he comes up with a big third down conversion.

I don’t have any more highlights of the first half

Y’all my girlfriend just brought me the best looking plate of nachos I’ve ever seen, you guys are on your own with highlights until the 3rd quarter. #ForTheShoe#DaBears#INDvsCHI

Blame her. But seriously, not much happened. Colts kicked two field goals, as per 2020 tradition.

This defensive line is something

Justin Houston is in a contract year. He will turn 32 before next season but the talented defender is currently on pace for 14 sacks and a massive payday.

Foles couldn’t really follow through with this pass because Buckner was there… again. He was very obviously worth that first round pick and all the money.

IDK if it’s a catch or not but how about Blackmon with that hit?!#ForTheShoe#DaBears#INDvsCHI#Colts#Bears pic.twitter.com/pOs9Y54ui0

This play was overturned and called an incomplete pass but third round rookie Julian Blackmon has been playing some really good football and this pass breakup is just a little evidence of that.

Marcus Johnson with a big play on 3rd down?!#ForTheShoe#DaBears#INDvsCHI#Colts#Bears pic.twitter.com/8TsPmTxfdS

Marcus Johnson? I was surprised too. Johnson does a good job boxing out his man and bringing down the pass.

It seemed like the Colts were better on 3rd down

Reich sent in two plays in the huddle. Rivers killed the first play to get this one. Great play call. Great recognition from Phil #ForTheShoe#DaBears#INDvsCHI#Colts#Bears pic.twitter.com/TaYRK42pDE

I can’t find the numbers right now but it seemed like the Colts were better on third down today, even with the three and out’s they had, they looked more like a Frank Reich led offense on their converted third downs than they have all year. This is a good sign in a game full of bad offense.

Special teams has been huge

Jordan Glasgow makes a big hit on Cordarrell Patterson during the return. Glasgow might end up being a very valuable member of the Colts for years to come.

This time Grover Stewart and DeForrest Buckner combine to push back the Bears defensive line and stop Cordarrell Patterson on third and one.

I’m not sure why Nick Foles missed this throw so high, but his receiver let it go through his hands and into Julian Blackmon’s waiting hands. This was the rookie’s first career interception.

The longest run of the day for either team

The Colts were able to eat a huge chunk of clock on this late drive before kicking a field goal and pushing the game to 19 to 3.

His first game in Colts blue

Trey Burton played his first game in a Colts uniform today and had two catches for 16 yards including this conversion that kept the clock rolling. It was hardly a big day for the free agent addition but not a bad day considering the circumstances.

Ya-Sin went down one play before this

Rookie Isaiah Rodgers is beaten by a very good receiver in Allen Robinson who caught 7 passes for 101 yards and this touchdown. Ultimately this play didn’t matter.

Still the best play in the Colts playbook. #ForTheShoe#DaBears#INDvsCHI#Colts#Bears pic.twitter.com/p6eLzoAtrr

I love this play design.

The Colts will go into this week having to prepare for the best opponent they’ve played all year in the Cleveland Browns. No, seriously, the Browns are good. 2020 is weird for so many reasons but the weirdest of all is that Kevin Stefanski has his team playing well and our Colts will need to play better than they did today if they’re going to have a chance a week from now.