Perplexing to the uninitiated, perhaps. Inexplainable to the uneducated, possibly. But occurring without definite aim, reason or pattern – not a chance.

“It’s definitely not random at all,” laughed legendary San Francisco 49er Tight End Brent Jones, whose father played quarterback for the Spartans from 1957-1960. “Talking about my dad’s time, his graduate assistant coach was a guy by the name of Bill Walsh. The senior quarterback when he was a sophomore was a guy by the name of Dick Vermeil. So, the amount of football heavyweights that have been involved in the San Jose State program is historical – it’s significant and it’s pretty awesome.”

Jones’ father Mike was part of a Spartan squad that went 16-22 under new head coach Bob Titchenal with signature wins over rival Fresno State and at Stanford. The story those numbers don’t tell is the building of a very specific, very tight-knit fraternity of guys – guys who understand it’s a constant uphill battle to be a small fish in a big pond. Guys who didn’t need much more than pads and a pair of shoes.

“When you played at San Jose State, prior to these past few years, you always had to understand that the San Jose State football player had one pair of shoes,” explained former head coach Terry Shea. “My big push when I got there in 1990 was to produce the idea that we’d have game shoes as well as practice shoes. That just put everything into perspective.” 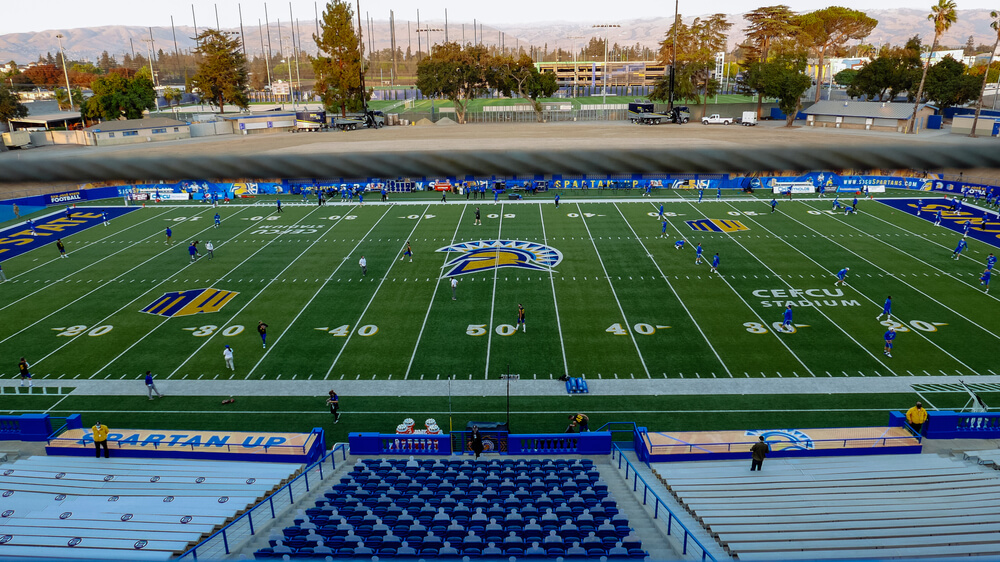 That single pair of shoes is symbolic of the program itself – an unpretentious, often overlooked band of brothers bonded together by eternal optimism and dedicated work ethic. No frills, just drills.

“The Spartan was not looked upon as the program with a lot of gifts and a lot of facilities,” continued Shea. “So, you took on that kind of mentality. And I think the brotherhood of the San Jose State Football players probably grew from that kind of an experience where you were always kind of the little brother to Stanford and Cal and even Fresno State.”

During the two years Shea was the Spartan’s head coach, he won back-to-back Big West Championships and compiled a 15-6-2 record before departing for Stanford to become Walsh’s right-hand man.

“As a coach at that point in my career, I would have never accepted our success being dubbed random,” admonished Shea. “We put together two winning seasons back-to-back and I know when I was with Coach Claude Gilbert just two years prior to that we went to a bowl game.”

It’s safe to say Shea definitely left San Jose a better place than how he found it but looking back now, the 75-year-old veteran coach realized he might have been part of the misnomer.

“I believe for whatever reason the San Jose State football coach tends to move on,” mused Shea. “Course I was young enough to believe that was the right move at the time but even some of the coaches since then, they’ve experienced some winning and then they have moved on. And anytime you lose your head coach some of your consistency goes with it and I would imagine the Spartan fan is probably a little jaded because it’s a hot and cold kind of program.”

The thing about San Jose State though is that you never truly leave it behind. Or maybe it never really leaves you.

“I think because I was an assistant coach here for a long time then I left, a lot of those former coaches and players come back all the time,” said current San Jose State Head Coach Brent Brennan. “Now, I don’t love it when they call me the day of the game and ask for field passes or tickets – but other than that, I love those guys coming back. I want every former player to come back to a game, I want them to come watch practice, I want them to feel like they are respected and appreciated by our program. That’s a really, really important thing to me.”

Brennan is following in the footsteps of the many great coaches that came before him and building something special in San Jose. Last year, his Spartans went 7-1, winning the school’s first Mountain West Conference title and seventeenth overall conference championship.

“You know Brent Brennan was on my first staff at San Jose State and when we got there, we were not very good,” said former Spartan Head Coach Mike MacIntrye. “But we were able to turn that program around and have success. And then to see them do it again last year, I was really happy for Brent. I follow him closely; we talk a lot and I’m excited for them this year!”

Not only does MacIntrye still watch San Jose State games and cheer on his old team, the current Memphis Defensive Coordinator has invested financially, donating money to the current stadium renovations project.

“The new stadium, they haven’t gotten the new side up yet but they’re raising money and we are trying to support that, we are backing that as hard as we can,” enthused MacIntrye. “We are excited about getting that built, that will be a great addition.”

Brennan is grateful for all the support

“I think ever coach has mentors and friends and people that you communicate with throughout the course of the season and Coach Mac has been phenomenal for me that way,” acknowledged Brennan. “He’s a guy that I’ve always been able to call, talk to, bounce stuff off of, ‘Hey we are doing this, what do you think about that,’ – he’s been tremendous for me. And I love that.”

San Jose State is one step closer to another Mountain West title, with a big game at USC this weekend. A win at the Coliseum would go a long way in garnering the respect the Spartans have been seeking and with the Trojans possibly looking past San Jose, an upset could be brewing.

And Jones, Shea and MacIntyre will no doubt be watching, along with the rest of the Spartan family, possibly debating whether or not to call up coach and petition for some passes.

“Whether it’s Coach Mac or any of the other guys who played here or coached here, they’re always welcome,” confirmed Brennan. “And if they call me on Gameday and ask for tickets, I’ll probably give them to ‘em.”