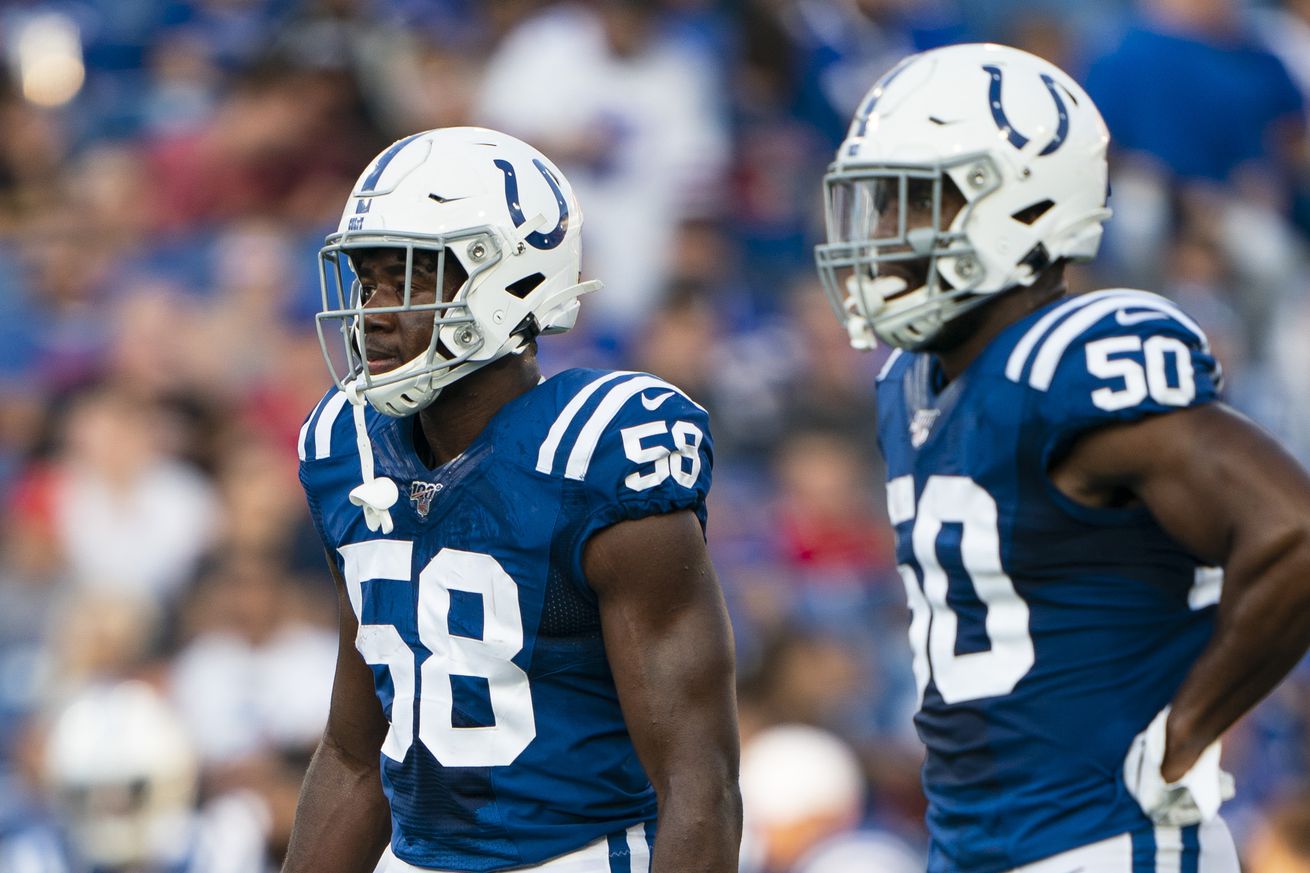 With NFL training camp officially kicking off July 28th in Indianapolis, the Colts have five highly contested camp positional battles to watch ahead of the upcoming 2020 season—although on-field practices won’t actually occur until a week later:

Both backs should handle the majority of the Colts’ between-the-tackles work this season (with Nyheim Hines and Jordan Wilkins also factoring in).

Given his experience and familiarity with head coach Frank Reich’s offense, the 4-year veteran Mack remains the frontrunner to begin the season as the Colts’ starting running back—and entering a contract year, he has a lot to prove and some extra motivation.

However, if Taylor explodes onto the scene during training camp (which the 5’10”, 226 pound athletic beast from Wisconsin with a 4.41 forty time is fully capable of), he could force the coaching staff’s hands even initially into being the starter and more heavily utilized back of the two to start 2020.

Both rushers should be prominently featured within the Colts’ backfield next season regardless (and in the hope of keeping each’s legs fresh down the season’s stretch), but who’s actually starting Week 1 could still be determined during training camp—especially if Taylor breaks out with a tantalizing showing:

“[Y]ou know, we’re just going to take it game-by-game,” Colts running backs coach Tom Rathman indicated earlier this offseason (via Colts.com). “That’s all we can do — really, play by play. You know, make sure that you do all of the fundamental things right, you’re right on target what you’re asked to do, and that’s really going to be the key to the improvement of our operation here, is everybody doing it the way that it’s coached and the details that are taught and at the level that we’re talking about. And the expectations out of whoever is in as a running back are the same, whether you’re the starter or you’re a practice squad player: when you take that huddle, and you’re in that huddle, there’s a certain expectation that we expect.”

With All-Pro Darius Leonard anchoring the ‘WILL’, the question is who will be occupying the MIKE and SAM starting positions alongside him.

This is probably a little less than a ‘competition’ and more about what logically makes the most sense for the Colts in how to arrange Anthony Walker and Bobby Okereke at their other two starting linebacker positions in 2020.

The Colts’ incumbent starting ‘MIKE’, Walker, is a cerebral and instinctive linebacker—who’s been the ‘quarterback’ of the Colts defense in recent seasons. While not the most explosive linebacker, Walker is consistently reliable and a sure tackler, who makes the calls for the Colts defense and is a leader of their linebacking unit.

Meanwhile, 2nd-year linebacker Bobby Okereke flashed as a rookie with his explosiveness, speed, and range—especially as a sub-package linebacker in coverage. However, the Colts have to find a way to get the dynamic linebacker to playing more full-time in 2020:

“Yeah, we expect big things from Bobby,” Colts linebackers coach Dave Borgonzi said earlier this offseason (via Colts.com). “He came in as a rookie and did a really nice job. Like Darius, Bobby is a guy that has great physical attributes, but also more importantly, he works really hard at it. So we expect Bobby to make a big jump from Year 1 to Year 2, just in his production, his plays on the ball, interceptions, game-changing plays. Bobby has a lot of ability and we expect him to really have a great season this coming year.”

At 6’1”, 235 pounds, Okereke’s natural position is presumably the MIKE long-term, but Walker also has the seniority and experience there—but is entering a contract season. Shifting Walker to SAM in 2020 could be a bit awkward, but it might make the most sense for the Colts as a more natural fit at that spot than Okereke—given his overall versatility:

“Anthony is a great teammate,” Borgonzi added. “The first thing (is) he’s an unbelievable leader. He’s a leader of the defense. He’s very smart. He’s a guy that can play multiple positions for us. He can play MIKE, he can play WILL, he can play SAM, so his versatility is unmatched.”

The good news about this positional ‘competition’ is that both linebackers should still be in the Colts’ starting lineup regardless (or at least playing prominent roles). However, whether the Colts ultimately decide to deploy each linebacker—whether at MIKE or SAM respectively—makes for an interesting coffee table conversation piece during their training camp.

Sheard didn’t play quite like his old self last season, but the versatile veteran defensive end could set the edge on running downs and kick inside in obvious passing situations. The Colts will need a bigger defensive end to contribute (and likely start) on running downs—whether that’s Autry (6’5”, 285 pounds) or Lewis (6’3”, 275 pounds)—or some combination of the two as a run-stopping platoon.

This is a significant year for both players, as Autry is in the last year of his Colts contract (with a $5.3M cap hit in 2020), and the Colts could be running out of patience with Lewis—who needs to start consistently producing on the field—having been an enigma so far in his early NFL career.

The winner of this competition could be the Colts ‘starter’ at defensive end—playing largely on running downs—with Kemoko Turay and Ben Banogu spelling them in obvious passing situations as more speed-based pass rushers. The loser becomes more of a rotational piece.

While 2nd-year cornerback Rock Ya-Sin is the expected starter on the outside, the question is who will be starting on the opposite side of him (with Kenny Moore covering the slot).

The Colts signed veteran Xavier Rhodes to a 1-year, $3 million ‘prove it’ deal earlier this offseason. The hope is that the former Minnesota Vikings’ All-Pro cornerback can regain his prior Pro Bowl caliber form—with a change of scenery, a reunion with his former defensive backs coaches in Indy, and a scheme shift to playing more zone coverage with the Colts.

Although Rhodes is the initial favorite to win the starting job, he’ll face stout competition in 2nd-year cornerback Marvell Tell. The 2019 5th round pick out of USC showed initial promise during his rookie campaign—especially in his press-man coverage and tackling.

Should Rhodes continue to struggle—who’s endured two straight down seasons with the Vikings, Tell could supplant him in the starting lineup with a strong training camp showing.

UDFA rookie kicker Chase McLaughlin was claimed off waivers by the Colts late last season in relief of their injured (and struggling) longtime veteran Adam Vinatieri.

The incumbent 2nd-year kicker is the favorite right now, but he has some top competition in UDFA rookie Rodrigo ‘Hot Rod’ Blankenship—who I get some definite ‘Major League’ Ricky “Wild Thing” Vaughn vibes from with his sports goggles—only he kicks heat instead of pitching it.

Blankenship won the 2019 Lou Groza Award as the nation’s top placekicker, was a consensus First-Team All-American, and was awarded First-Team All-SEC honors this past season. He should seriously challenge for the Colts starting kicking job.

The tough part of this kicking competition is that the loser goes home, ends up on the practice squad, or is traded to a kicker needy NFL team entirely—as the Colts aren’t going to carry two kickers on their active roster. It’s almost ‘all or nothing’ here for both players.