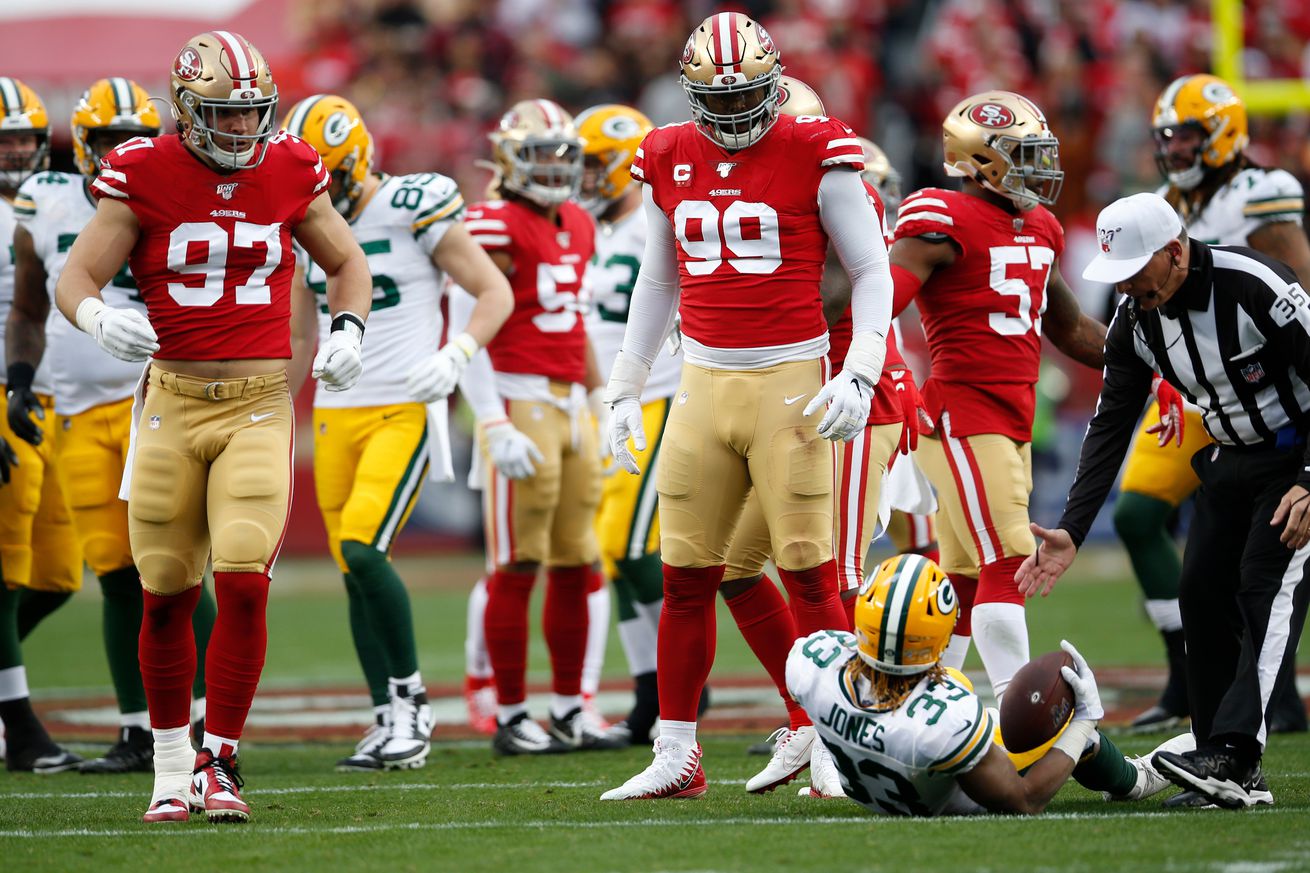 The Colts talk about the three tech all the time…but why?

The Indianapolis Colts made a a huge move this offseason when they traded the 13th overall pick in the draft for All-Pro defensive tackle DeForest Buckner. While some in the analytics community have called this a risky or too high a cost of a move, the Colts have been adamant about upgrading the three technique position on the defensive line. It’s honestly all we’ve heard about this offseason with GM Chris Ballard even stating in an interview that “the three technique drives this thing.”

The main question to answer though is why? Why does the three technique drive everything on this defense? Today I look to answer that question while also looking at why adding a player like DeForest Buckner is such a big boost to the Colts’ defense.

We all know that Colts’ defensive coordinator Matt Eberflus is part of the Rod Marinelli coaching tree and there are a lot of similarities between the two styles of defense that both coaches run. One position that has always been key in a Marinelli style defense is the three technique or ‘under’ defensive tackle. Here is what Marinelli had to say in an interview about the position a few years back when discussing the potential of Tyrone Crawford filling that spot for the team:

“You put your cleats on, you go in that spot (three-technique defensive tackle), there’s a history to it, a long history in this defense”

And he’s right because there is a long history to it in his style of defense. With the Buccaneers in the early 2000’s, he had Hall of Famer Warren Sapp destroying opposing offenses. In the mid-2000’s with the Bears, it was Henry Melton and Tommy Harris. Even with the Cowboys he was able to help turn Jason Hatcher into a Pro Bowler in 2013 as the three technique.

That is just the history of the position though under Marinelli and the question still remains as to why this position is so vital. I reached out to John Owning of SportsDay Cowboys for a bit of an explanation and he gave me two main reasons why the position is so important.

1.) The 3T, or Under Tackle as Marinelli calls it, covers up the WILL LB, which -in theory- gives the WILL time to pursue without being immediately encumbered by climbing OL.

2.) The 3T has to be able to penetrate and make plays in the backfield because he’s the DL most likely to see the 1v1 matchups.

So let’s look at a few clips from Jason Hatcher during his Pro Bowl season with the Cowboys in 2013 too see these two points in action.

The positioning of the three technique is key to getting those one on one match-ups. Since the position is lined up over the outside shoulder of the guard, the offense is forced to either make the center come across the guard to help on the double team, have the tackle down block on the double team which leaves the defensive end unblocked or left with a tight end, or leave the guard on an island against the quicker defensive lineman. Here Washington leaves their left guard alone with Hatcher and he is able to make the tackle for a loss in the backfield.

The same principles apply to pass rush as the offense either has to devote extra resources to a double team (which opens up a gaping hole on the line) or leave the guard one on one with the three technique. Here Hatcher is able to win his one on one match-up and get the sack on the play.

Applying the Principles to the Colts

The first clip showcases what John mentioned in his first point. The three technique is typically lined up in front of the WILL linebacker, which happens to be All-Pro linebacker Darius Leonard, and tasked with opening up space in the middle. It all comes down again to that choice that an offensive line has to make. Do they go out of their way to chip/double the three tech or do they leave him alone on an island? Here Denico Autry doesn’t do anything special but the center goes out of his way to chip him. This step to chip Autry throws off the timing of the blocks and Leonard is able to beat the late climbing center to the hole for a stop.

On top of eating difficult double teams, the three technique has to be skilled at one gapping and creating disruption in run defense. The Colts main principles of their defense is disruption. That is the name of the game for this team. If the offensive line isn’t going to double the three technique, they have to create disruption in the backfield by quickly shooting their gap and getting that penetration. Here backside three tech Grover Stewart shoots through his gap and creates havoc in the backfield, leading to a loss for the offense on the play.

Finally, the Colts three technique has to be able to make plays on their own. They have to create disruption in the backfield and make life easier for the WILL but they also have to be able to shed blocks and make their own plays. Here Autry uses his strong hands to quickly discard the one on one block and make the tackle for a short gain.

When it comes to rushing the passer as a three technique, it’s all about winning that one on one match-up and shrinking the pocket for a quarterback. It doesn’t need to end with a pressure on every play but disruption again is the name of the game. Denico Autry has primarily been the Colts three technique on passing downs the past two seasons and he has been pretty solid in that role. He has totaled 13.5 sacks and 25 QB hits from the three technique spot over the past two seasons (playoffs included) according to Pro Football Reference.

Autry has been able to win his one on one match-ups as a pass rusher the past two seasons with his heavy and effective hands. He may have some of the best hands in the league for a defensive lineman and this leads to a ton of success with swipe moves and bull rushes. Here are two examples of him winning his pass rush utilizing his hands and disrupting the pocket for sacks.

How Buckner fits with this

So far we have already looked at the history of the three technique in this style of defense and how the Colts have utilized this spot the past two years. Let’s talk now about the superstar in the room. We have already established that the three technique is pivotal for freeing up the WILL (Darius Leonard) in the run game and key in the passing game too as they have to win those one on one match-ups. Denico Autry was real solid in doing those things the past two years but what happens when you add a superstar into that role? It is a game changer.

As I’ve said a few times in this piece, if the three technique is double teamed then it is almost always a win for a defense because it frees up space for the WILL to make a play. What if you three technique can break the double team and still make a play on the ball? Here Buckner takes on the double team head on and twists his ankle to get proper leverage to hold at the point of attack. He then quickly discards David DeCastro (a top tier guard in this league) and makes the play at the line of scrimmage.

Even if he isn’t breaking the double team, he is able to command that attention and free up the WILL with so much ease. Look at this next clip from week one of last season. Buckner gets the attention in the middle as the right guard and center double him. Buckner actually gets knocked down on the play but he still accomplishes his goal as Kwon Alexander is able to step up and make the play in the hole. Now picture how many tackles Darius Leonard can get with a three tech who commands this much attention playing in front of him.

Want a glimpse of what Buckner is going to do in the run game for the Colts next season? Check out this next clip. Buckner crashes hard through the ‘A’ gap on this zone run and completely disrupts the play before the run even gets going. I’ve said in now multiple times in this piece and I’m going to say it again. Disruption is everything for the Colts’ defense. Adding a player with the size, strength, and athleticism and asking him to shoot gaps and take pressure off Leonard is going to do wonders for this defense.

Lastly, the pass rush. I could add dozens of clips of Buckner winning his one on one match-up in multiple ways but honestly that would take up way too much time. So to make things simpler, here is a video I made of Buckner executing his patented chop/swim move to perfection. All in all, Buckner is a perfect fit for this defense and he is going to make things easier for this team. In the passing game, teams are either going to have to double him, which leaves less help for teams to account for Justin Houston and Kemoko Turay, or leave him to destroy his match-up. It is going to be a fun season with this superstar in the middle.

DeForest Buckner’s Chop/Swim has to be one of the most unblockable rush moves in the NFL pic.twitter.com/K6IaiqEovB

When Chris Ballard said “the three technique drives this thing” in an interview last year, he truly meant it. He even backed up his words by trading a lot of draft capital to acquire one of the best three techniques in football. That move wasn’t just to add a superstar to a defense that needed one up front, it was to also add a dominant player at a key position for the team.

With Buckner up front, life is made so much easier for Darius Leonard in the run game. Almost every climbing lineman he would normally see is going to be delayed a bit due to having to chip or double Buckner. With that, Leonard is going to be able to see the field even better and run cleaner to the ball than he ever has in this league. The three technique frees the WILL backer and luckily, the Colts have a superstar at both of these spots.

In the passing game, his addition is a game changer. Interior pressure is everything to lessen the pocket for the elite quarterbacks around the league. A player like Buckner commands attention or he is going to disrupt nearly every pass attempt. Another thing to watch is how much more effective the Colts’ stunts and twists are going to be with added attention looking Buckner’s way.

Overall, the price tag was high to acquire and pay Buckner but what he can do for this defense may be worth every penny. The three technique truly drives this thing and having a superstar like DeForest Buckner in that role can truly change this defense for the better.