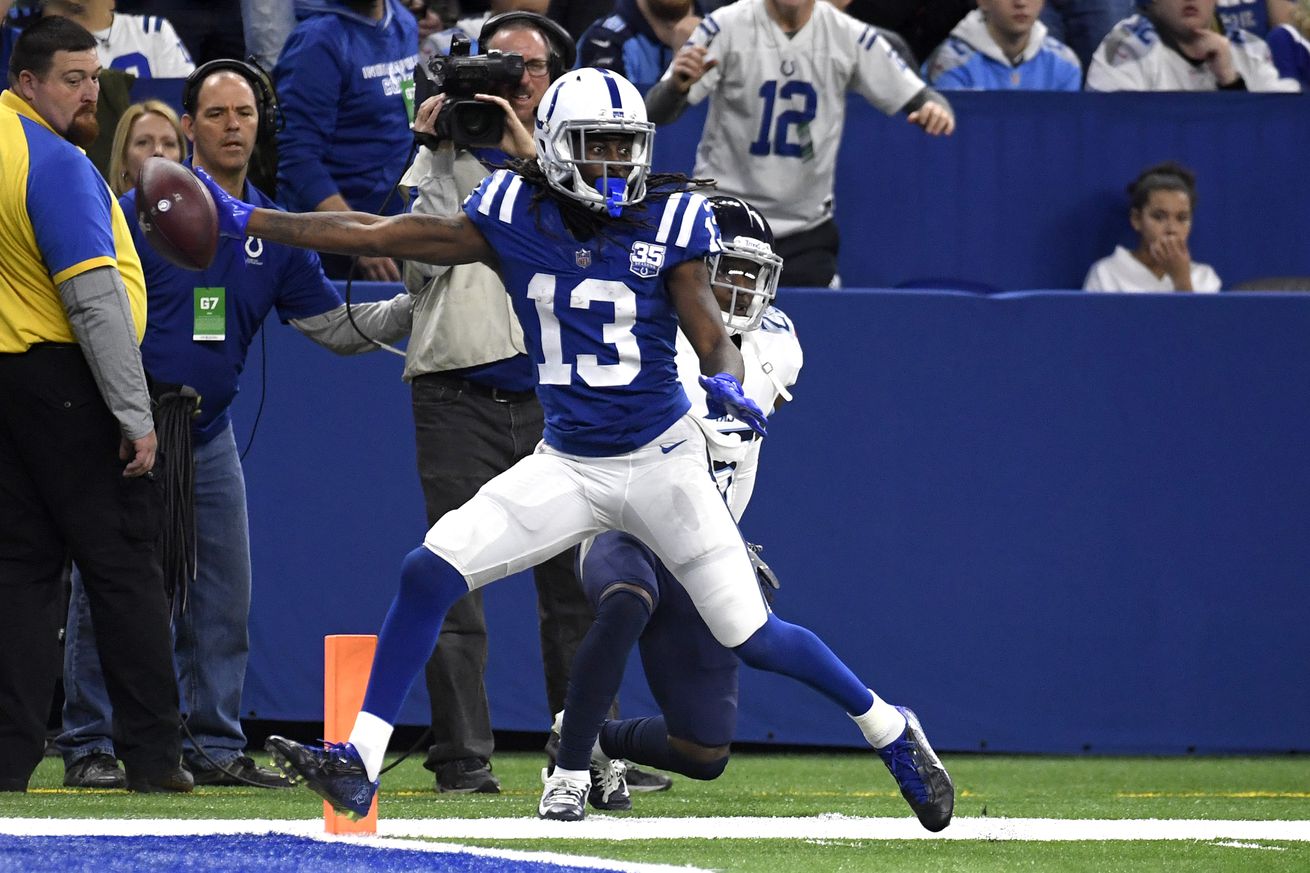 Hilton has excelled in the redzone the last two seasons

Despite the major drop-off in offensive production and efficiency from 2018 to 2019, the Colts remained among one of the league’s best teams in the redzone this past year. In 2018 the Colts scored a touchdown on 67% of their redzone trips (5th in the NFL) and that number only dropped to 64% in 2019 which was still good for 7th in the NFL. Looking just at their passing stats in the redzone, the Colts are elite in this area of the field. Over the past two years, Colts quarterbacks are 97-163 (60% comp) for 628 yards and 51 touchdowns to just 2 interceptions.

While there are many reasons why the Colts have been so successful in this area of the field, Eric Ebron’s insane production here and Frank Reich’s playcalling are two examples, I want to look at one player in particular today. T.Y. Hilton has been billed primarily as a deep threat in his NFL career but the last two years have seen him turn into a very reliable redzone threat. When targeting Hilton in the redzone since 2018, Colts quarterbacks are 14-22 for 90 yards and 10 touchdowns. Today we are going to look at all 10 of those touchdowns and see how Hilton wins in the redzone.

The common misconception among many football fans is that big receiver = great redzone target. That isn’t necessarily the case as teams are becoming better and better at utilizing their speedy playmakers in the short area of the field. The Colts at the beginning of Frank Reich’s tenure recognized that Hilton can be a mismatch in the redzone despite not being a pure jump ball receiver. This first clip is a great example of that. This is likely a two way go type of route where if the corner is pressed then Hilton runs a fade and if the corner is off the line then Hilton would run a slant, like he does here. Hilton is too quick off the line and the corner is unable to close on the quick pass for the score.

I’m going to put two clips together here on this next one as they are the exact same play nearly a year apart from each other. The first clip is against the Buffalo Bills in 2018 as Hilton is lined up in the slot and able to beat his guy cleanly on the out route for the quick score. Against the Atlanta Falcons in 2019, the Colts ran the exact same play as Hilton is again able to beat his man one on one to the outside for the score. Big receivers are fun to have in the redzone but having the smaller and faster receivers can be useful too as they are able to separate quickly for scores in the short area of the field.

Another way the Colts got the ball to their playmaker in the redzone was to draw up certain plays for fairly easy scores. I typically don’t say easy scores too often but both of these examples are literal walk in touchdowns. The first one is a beautiful design by Frank Reich on the goal line against the Washington Football Team in 2018. Needing a touchdown late to put the game away, Reich draws up an impressive legal pick play that leads to a miscommunication in the defensive secondary. The result is Hilton being completely uncovered for the score.

Jumping forward to 2019, the Colts drew up another pick play touchdown for Hilton. Hilton is lined up at the top of the screen and sells like he is firing off the ball only to loop back around for a screen pass. Tight end Eric Ebron is able to cleanly shield off the outside defender which allows Hilton to walk in for the score.

Finding the soft spot in the Zone

This may be the most underrated aspect of Hilton’s game and it is a true testament to his chemistry with Colts’ quarterbacks over the course of his career. Hilton is excellent at finding soft spots in zones and sitting down in space for quick passes that move the sticks. This ability does show up in the redzone as well as he is finds those small spaces in tight quarters for scores. He did it here against the Chargers in week one this past season. The Chargers are backed off in a soft zone on third down and Hilton takes advantage. He delays his route off the line and flashes in front of his defender for the score.

Obviously it is great to talk about route running and play design (I could honestly do it all day). Sometimes though, your star players just need to make something happen in the NFL and no amount of scheme can truly account for it. Hilton has been a star in this league for a long time and he is simply a difference maker. Even on plays that seem small like this one against the Bills in 2018. He runs his pick play like he is supposed to but notices Andrew Luck rolling out of the pocket looking for a receiver. Hilton is able to go off script and work himself open for the score to bail out his quarterback.

An even better example of this was against the Titans in week 11 in 2018. Hilton was dominant this game and toyed with Titans cornerback Adoree Jackson all day long. On this play, Hilton again runs his route but has to break it off as Luck buys time in the pocket. Luck drops a dime on the back shoulder for Hilton and he is able to make the catch with ease. After making the catch Hilton is able to turn up field, break the tackle by Jackson, and tip toe his way into the endzone for a score. Star player making a star play.

Hilton also has an innate ability to make these plays in the biggest stages of the game. Last year against the Chargers, the Colts were down eight with very little time left in the game. Quarterback Jacoby Brissett dumped off a quick pass to Hilton in hopes of picking up a few yards. Hilton however had other plans as he is able to shed two tackles in space and turn the outside corner and dive into the endzone for the score. The Colts would eventually lose this one in overtime but Hilton made a superb play here to give the team a chance late.

The final clip in this piece again comes in crunch time as the Colts needed a score late to beat the Titans in week two. After a big run by running back Jordan Wilkins, the Colts decide to ride the wave of momentum and throw a fade route to their best playmaker. While Hilton is undersized in this matchup, this doesn’t stop him from making the play in the corner of the endzone. Hilton is just a playmaker in every sense of the word and is a threat to defenses no matter where the offense is with the ball.

One of my favorite things about the NFL is seeing how players develop and change throughout their careers. Justin Houston is one of my favorite examples of this as he has gone from an athletic freak to one of the most powerful defensive ends in the league once he lost some of his quickness. While I don’t think Hilton has lost much in terms of athleticism, he has developed a good bit in terms of being a more complete receiver in recent years.

He is not just a deep threat and hasn’t been for a few years now. His elite quickness, ability to find space in zones, and ability to just make plays for an offense makes him a weapon all over the field. While he did struggle with injuries this past season, I do expect a big bounce back from the veteran receiver and expect even better production in the redzone with Philip Rivers under center in 2020.