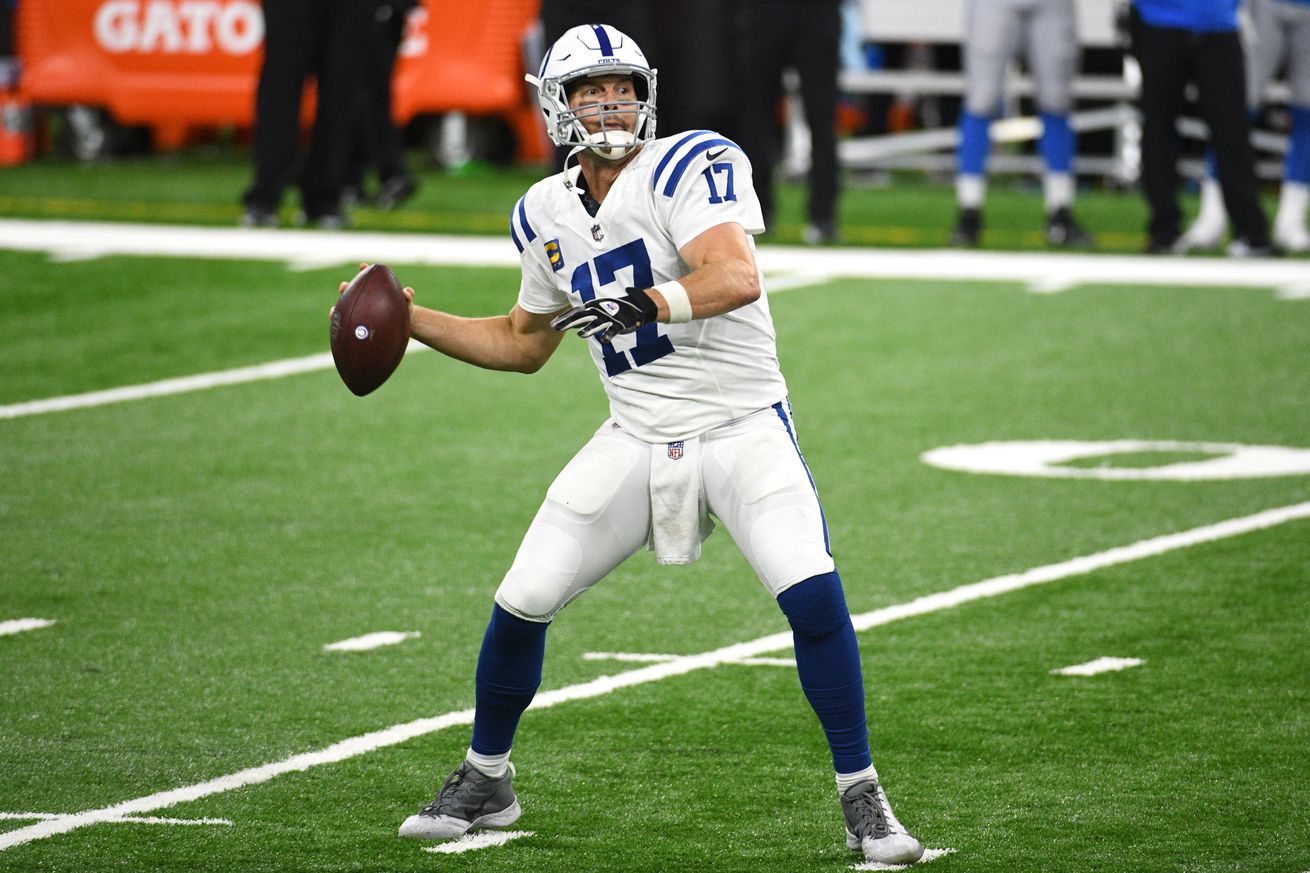 The Colts’ passing offense was on fire yet again in Detroit

Five games into the 2020 season, there was a lot of cause for concern for the Colts’ offense. The rushing attack that was so dominant a year ago seemed to have vanished and the passing offense was inconsistent and stale. While the running game is still a work in progress, the Colts appear to have the passing game figured out.

Over the past two weeks, quarterback Philip Rivers has thrown for 633 yards and 6 touchdowns with just one interception. He has this offense rolling the past two games and was extremely efficient in the Lions game this past Sunday. Today though we will look at why this offense was so successful and how they can maintain that success going forward.

The Colts came into this matchup with two weeks to prepare for the Lions’ defense and it showed on film. Head Coach Frank Reich had a lot of plays designed specifically for isolating preferred mismatches and to use the Lions’ man coverage against them. I want to look at two plays in particular to illustrate this point though. The first one was the big chunk play to Jordan Wilkins on the opening drive. The Colts are in 13 personnel with Wilkins lined up wide. Rivers motions Wilkins to get the man read and set him up closer to the line.

Once Rivers gets that man coverage read, he knows Wilkins will be open on the route. The Colts run a quick drag route with Wilkins across the formation and the tight ends in the 13 personnel run quick hitches off the line. These hitches combined with the motion on the outside leaves the corner way out of position and Wilkins is able to go untouched for 14 yards.

Colts utilizing 13 personnel to beat man coverage. Running back out wide goes in motion to identify man. From there, Doyle and Alie-Cox run quick hitch routes to free the man off Jordan Wilkins. Wilkins comes across on a drag and his defender is too caught up in traffic to defend pic.twitter.com/f0XRVHlWYu

The other prime example of the schematic genius of Frank Reich was on the first touchdown pass to Nyheim Hines. This play is incredible as it starts again with motion to identify the man coverage by the defense. After that, the Colts bring Hines in motion to sell reverse action on the backside. Hines’ defender completely buys this as he loafs a bit and loses his man in the confusion. Reich must have expected this as Hines quickly turns back out for a swing pass in the wide up area to the right. He is then able to make magic happen and score on the play. While there have been a lot of factors that have led to passing success the past two weeks, it would be ill advised of me not to give Reich credit for his game plans during this stretch.

This play design is A++++. Colts knew how to take advantage of the Lions in man coverage in this one. Motion of Doyle shows man coverage. Hines comes around like he’s on the reverse and the safety in man completely buys it. Hines then turns back around for the wide open swing pic.twitter.com/vDVtPSVBSv

Philip Rivers has been excellent

It has only been a year since the Colts have had excellent play from the quarterback position but it felt like an eternity. Over the past two weeks, the Colts owe a lot of their team success to the 38 year old quarterback calling the shots. He has been remarkably accurate and his aggressiveness to push the ball down the field has been extraordinary. This is a great example of the type of rhythm he is in right now. Big third down early and the pocket is collapsing a bit around him. Rivers doesn’t panic though as he calmly climbs the pocket and finds Marcus Johnson on the deep in for a big gain.

Told y’all that dagger concepts would be big in this matchup. This play however is all Rivers. Climbs the pocket through pressure and delivers a strike to Marcus Johnson. Johnson also had a great route at the top of the screen but man I love this from Rivers. pic.twitter.com/WJoDUfIf3O

Rivers has looked like his younger self these past two weeks. This throw to Nyheim Hines for a touchdown is near perfection on the outside. The Colts run a fairly simple five wide play with Hines running a quick hitch and go. The safety bites and Hines gets a step down the field. With pressure in his face and having to throw off his back foot, Rivers delivers a perfect pass for the score. These are exactly the type of plays that a veteran quarterback needs to make and he’s made them the past two games.

Vintage Philip Rivers on this pass. Single coverage on the double move up top with Nyheim Hines on a safety. Rivers delivers a perfect strike off his backfoot for the score. Incredible pic.twitter.com/Mg3Lo9qRVM

Nothing screams Philip Rivers more than a back shoulder slot fade. What makes this throw even more impressive is how he fits it in between the trailing cornerback and the closing deep safety. This is an extremely accurate pass that many quarterbacks in this league struggle with. Rivers, especially these past two games, has surpassed my expectations from this offseason and the Colts need this version of him to show up down the stretch if they want to make the playoffs.

Back shoulder throw on a slot fade with the safety closing over the top? No problem for Rivers. He has been dealing these past two weeks pic.twitter.com/ZTKo6ftiQU

The final point I want to make revolves around the Colts’ group of pass catchers. It is an unspectacular group that doesn’t have a true alpha or number one receiver. What it lacks in dynamic ability though it makes up in the mental aspect of the game. Coach Reich and the offensive staff have done a great job of teaching these players to know how to diagnose and beat zone coverage effectively. This play by Mo Alie-Cox is a great example as it is a scramble drill broken play where Alie-Cox is able to find space in the zone and pick up a first down.

This is one way to help your quarterback who has struggled a bit against zone this year. Mo Alie-Cox does a great job of keeping the play alive and finding an open area to sit in the zone. Makes himself an available target for Rivers on the rollout for a nice gain. pic.twitter.com/EKOiRaNbDK

This next example is even sweeter as Marcus Johnson excels at finding soft spots in zone coverage. This isn’t a fancy play by any means by the Colts as they are running a traditional zone beater with an underneath drag route meant to draw up the linebacker to create space for the in route behind them. While this does open up space for Johnson, he does an excellent job of quickly getting out of his route and stopping in the sweet spot of the zone rather than continuing the in route. Rivers picks up on this and delivers a strike for the first down.

The Colts have a nice stable of young receivers who understand how to beat zone coverages. Here Marcus Johnson gets to a prime spot between the linebackers and safety and cuts his in route off short to sit in the opening. Rivers recognizes this and hits him with a great pass pic.twitter.com/2YpYHDOEe9

It really isn’t anything special on some of these routes but you can just tell that the coaching and mental side of the game is there. Here Trey Burton just sits in fron tof the zone linebacker and provides space for Rivers to fit a pass inside for a nice gain. It’s a very simple concepts but this fundamental understanding of defense by the Colts’ pass catchers makes life so much easier for Rivers throwing the ball.

The Colts don’t have any star pass catchers on the roster. They just have a lot of smart players who get the job done. Nothing flashy on this play by Trey Burton but he sits in front of the zone linebacker and fades to the open spot for a nice catch. pic.twitter.com/IcAeOSfHvd

The Colts are riding an offensive high right now into a big matchup against the Baltimore Ravens. While this is a tough matchup for many reasons, there is no reason to believe the Colts’ passing attack is going to slow down anytime soon.

If the Rivers can maintain this level of play and Reich can continually scheme receivers open down the field, this passing attack can be deadly even without a true number one receiver. They have the coaching, development, and quarterback play to be a very good passing offense that the Colts’ need to lean own during this upcoming tough stretch of games.