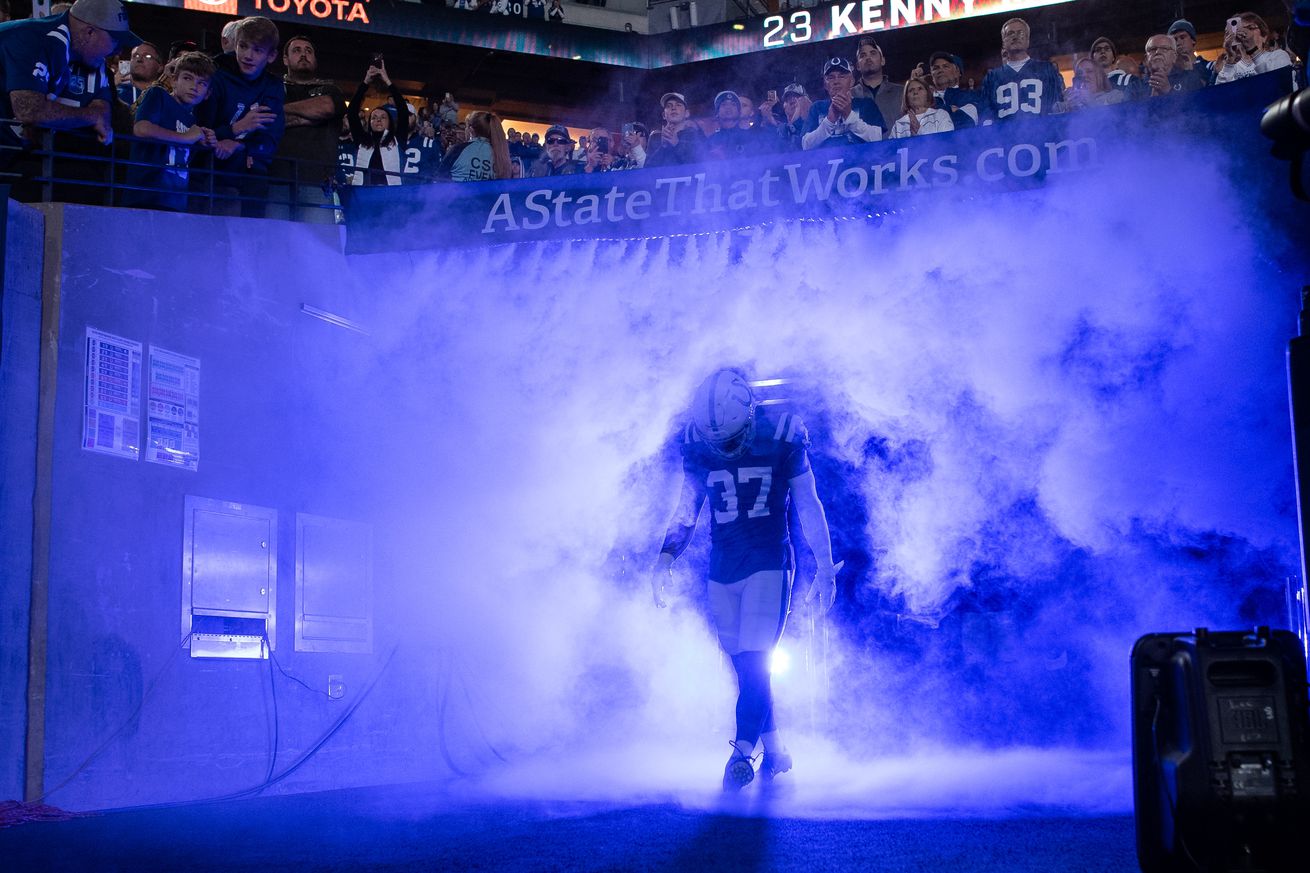 While the Indianapolis Colts’ 2019 draft class certainly wasn’t as good as the historic class Chris Ballard put together in 2018, the group had a pretty solid rookie campaign. While a few players struggled with playing time and injuries, a few of the players really made an impact in year one. One of those players was fourth round safety Khari Willis.

Willis made his presence known early with the Colts as he took over the backup safety spot from team favorite Matthias Farley on day one of Training Camp. Just two games into the regular season, he took over the starting safety spot from longtime starter Clayton Geathers as well. Willis ended up putting together a very solid season overall and looks to be a pivotal piece in this defense going forward.

Today, we will be looking at some of his best plays in coverage and in run defense from year one. I will put a disclaimer here saying it was extremely hard to narrow down which plays to choose as I did have 20+ clips cut up for this article before I cut it down a bit for readability purposes. Let’s look at this talented safety’s rookie year on film:

The number one thing that pops on film when you watch a player like Willis is his awareness and recognition skills. I was telling Jake Arthur (Colts.com) that I could couldn’t count on two hands the amount of times that Willis flew up from his safety spot to make a play mere seconds after the ball was snapped. I also pointed out to Jake in my discussion with him that he does this so well and I couldn’t recall many times at all that he over-committed and was beaten over the top. He attacks downhill with great confidence and awareness and it rarely puts him out of position. That reliability along with his ability to make plays in the backfield and near the line of scrimmage made him a huge asset to this team in year one.

The theme that you all will notice throughout this piece is Willis’ awareness as it was simply elite on all levels. This play is extremely underrated for a rookie to make in this league. The Raiders identify that the Colts are playing man on this play so they try to catch the Colts out of position with the play-action boot. They try to take advantage of Willis’ tendency to play the run by isolating him with the fullback leaking out in space on the backside. Willis does a great job of crashing down to play the run but then redirecting his momentum to stay on the fullback and force the incomplete pass.

Just another example here of Willis taking an aggressive yet confident angle on the screen play. Willis is likely in man coverage over the slot receiver here as he is lined up directly over top his route on the inside. The second he sees his man step back for the screen pass, he flies downhill to make the quick tackle in the backfield for the loss. I need to reiterate again that this type of aggressiveness and awareness from a safety is expected from maybe a guy who has been in the league for seven or eight years but to see this from a rookie in his fourth career game is extremely impressive.

The one area he can stand to improve a bit going into year two is just his ball skills and making more pass breakups and interceptions in coverage. I think he will improve much more in this area with time as he seems to see the field much better with the more playing time he gets. He was a split second late on a few pass breakups last season and with more seasoning and playing time, those plays should turn into incomplete passes. His best rep in deep coverage was here as he sits on top of the post route and just misses coming up with the interception on the play.

The Colts utilized Willis in the box quite a bit last season and that was another reason why the team had a top rush defense in 2019. Willis is physical like a linebacker, has the quickness and savvy ability to avoid blocks like Kenny Moore II, and brings that elite awareness in the box to read holes and make plays. Here is an example of his run defense when in the box. He is reading two things on this play that signal the run is coming. He is reading the tight end (81) and seeing that he is sealing the backside and he is reading the first step of the linemen to see which way the ball is going. These two factors lead to Willis diagnosing the correct gap and making a quick tackle at the line.

Getting back to pass coverage, this was one of my favorite reps in man coverage for the young safety in his first year. Matching up against a freaky tight end like Noah Fant in the red zone is tough for any player but Willis wins here with his knowledge of where his help is and his confidence on the play to be in the right position. He lets Fant win off the line and break inside because he knows he has help with Malik Hooker in the zone there. He then gets into trail technique on the inside hip to make any throw more difficult for the quarterback. While the pass does still come, Willis does a great job of calmly letting Fant go up for the ball and then playing through the hands and forcing the talented tight end out the back of the end zone for the incomplete pass.

The Colts love to deploy three safety looks on obvious passing downs to get more speed on the field. With the departure of Clayton Geathers in free agency, this opens the door for Willis to step in as the money backer type on these defensive sets. Here is an example of Willis in that role last year. Late in the game against the Steelers, Defensive Coordinator Matt Eberflus draws up a beautiful blitz that gives Willis a free lane to rush the quarterback. He was just a millisecond away from forcing a game changing fumble. I really like this play overall though as it is a little glimpse into what the future with Willis could be on obvious passing downs next year.

According to Pro Football Focus, Willis lined up along the defensive line 78 times last season. That was 78 times where the Colts were not afraid to put Willis right on the line to make a play. The closer he is to the line of scrimmage the better as he just makes so many plays in the backfield. Here he is lined up along the line rushing off the edge against an obvious run formation. He fires off the edge and is able to corral the much bigger running back in the backfield for a loss on the play.

Looking back at Willis in deep coverage yet again and he does a lot of good things back there too. I’d still like to see more plays on the ball overall but it’s hard to ever find this guy out of position. Here Willis is in two high on the play with Hooker in the other deep zone. Willis reads that the routes in front of him are running short and then switches his focus over to the other side of the field. He notices a crossing route coming his way and does a great job of having good yet aggressive depth on the play. He plays under the route because he knows he has help over the top and that way he can break underneath if a shorter pass is thrown. This positioning leads to an overthrow by the quarterback on the play.

To finish off this piece, I’m going to drop this video I made for Twitter a while back because I wanted to include so many more of his run stops from last season. Willis ranked 12th in the NFL among all safeties with 24 stops last season. The remarkable part of that is that he played almost half as many snaps as any other player who ranked in the top 15 of that stat. He also had the seventh highest run stop % among safeties last year with 6.5. Willis was an absolute stud last year at stopping the run and flying up from his safety position to limit offensive gains.

Colts rookie SAF Khari Willis ranked 12th in total stops from the safety position last season with 24. He also played the least amount of snaps out of any player who ranked in the top 15.

He also had a run stop % of 6.5 which was the seventh highest in the NFL among safeties: pic.twitter.com/CvlTVKoDbE

Khari Willis is one of those players who isn’t this athletic freak who makes insane highlight reel plays. He is one of those players though that if you spend any time studying this defense, you’ll find yourself asking yourself who #37 is at least five times a game. He is an incredibly instinctual and reliable safety and he more than exceeded expectations in year one.

Going into year two, he does need to make more plays in coverage but I’m not too concerned there as he really just needs to see the field more to be more comfortable to make those plays. The expectations for this upcoming season are sky high for him. Here is what Linebacker Anthony Walker Jr. told me a while back regarding Willis and his potential for next season:

I think his story is very special. With everything he endured last season, he was still able to put together a productive season. Especially as rookie, that was tough for him. He’s a warrior and he lives football. I mean he’s just the true definition of a warrior. I’m excited for him this year after he played so well last year and I’m excited to see that year two jump for him.

Overall, I think Willis has sky high potential for this team. He is a very smart player who plays physical and seems to fit everything this team wants in their safeties. If he can make a few more plays in coverage and become a good playmaker for this team on top of what he already did as a rookie in run defense, then I definitely see a Pro Bowl caliber player going forward. He is that good and I want to implore you all to keep a close eye on this guy going forward.