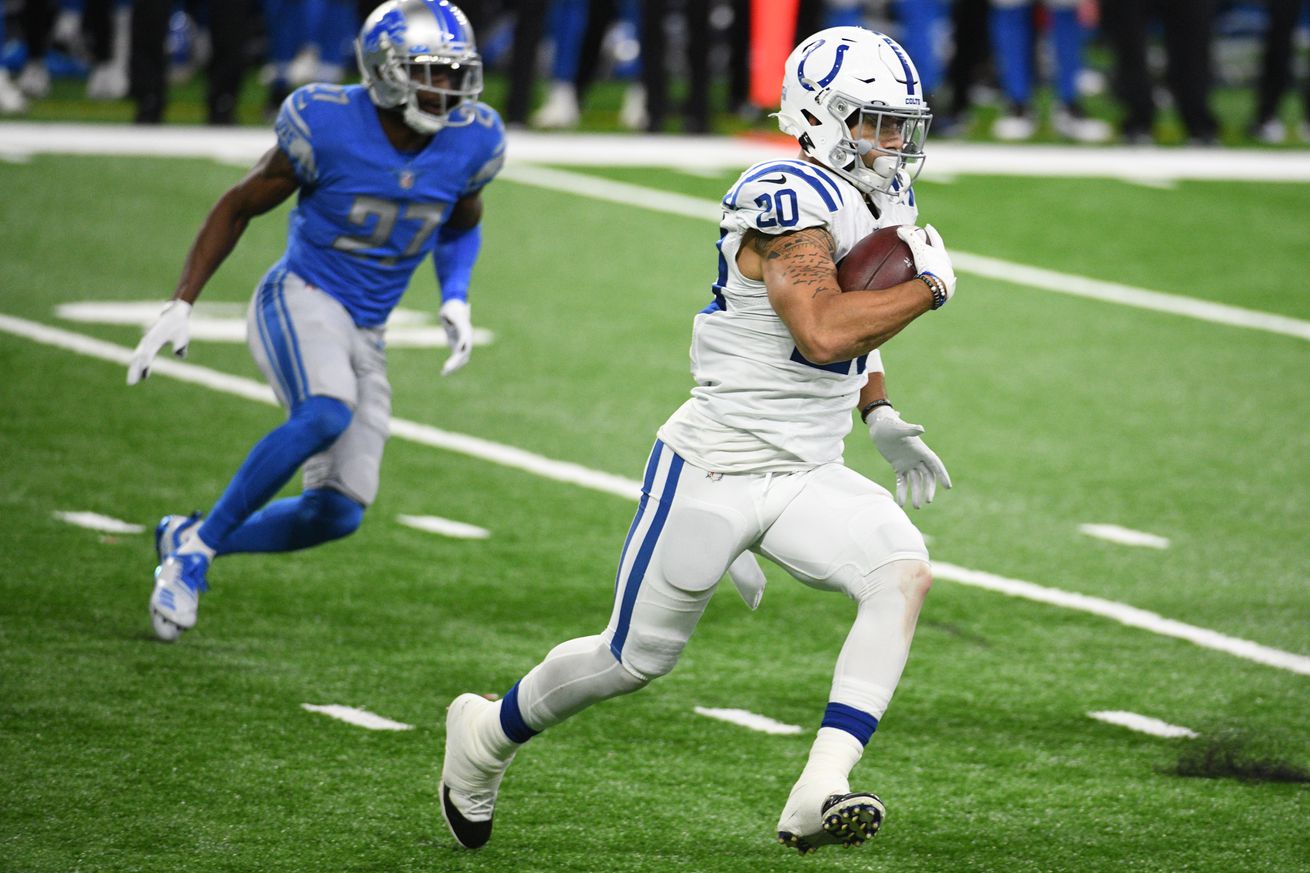 When the Indianapolis Colts drafted running back Jonathan Taylor in the second round of the 2019 NFL Draft expectations were sky high for the rookie. While he hasn’t been terrible by any means this season, he hasn’t been the super productive workhorse that he was in his college days. He has 100 carries for 389 yards and 3 touchdowns through seven games this year.

On the other hand, Jordan Wilkins has been his typical productive self as a sub rusher. While his yards per carry is at a career low, he has flashed really strong play in three of the four games that he was featured in the offense. He had his best game of the year on Sunday as he ran the ball 20 times for 89 yards and a touchdown in the Colts’ win.

So the Colts enter a bit of dilemma as they enter a very tough stretch of games. Who do they start/give a majority of snaps to at running back? Today, we will look at the best and worst aspects of both players and how the Colts can create more yards on the ground with these two going forward.

Starting with Mr.Reliable, Jordan Wilkins has been solid for this team for years. His career yards per carry of 5.2 is among the best in the league over the past three years and he constantly makes big plays when called upon. There is nothing flashy about his game but he understands how to decipher between being a north south runner and being a patient runner. He has that perfect balance of decisiveness and patience in his game that allows him to be a consistently efficient running back. Here he presses to the outside, runs through an arm tackle, and gets up field for the first down.

Really good outside run by Jordan Wilkins here as he runs through an arm tackle at the line for a nice 16 yard gain. Love that he keeps those legs moving at the end of the run pic.twitter.com/xXXrFWM2js

Looking at the decisiveness now, he understands when he needs to get north and south and get those positive yards. That is what he has over Jonathan Taylor right now. There are no issues with his vision or ability to manipulate blocks. He is very developed in that area and knows the nuances of playing running back in the NFL. Here he starts to his right before quickly planting and getting to the open lane to his left. Beautiful job of setting up one run before quickly redirecting to another one.

Love how decisive Wilkins is as a runner. He will wait for a play to develop but if he sees an open run lane, he’ll take. Quickly redirects here for a good gain pic.twitter.com/LR0bwJFS5o

Now let’s get to the biggest reason why Wilkins was getting a majority of the carries on Sunday. The Colts’ offensive line has struggled a bit in run blocking this season. The result is less lanes for the backs to work and making the backs have to create more yards. This is where Wilkins has a huge advantage as he has forced over double the amount of missed tackles as Taylor this year in less than half the carries. He makes two defenders miss in the backfield before putting his head down and getting the first down. This is a three yard loss turned into a 12 yard gain and we have seen Wilkins do this multiple times this season.

Here is the reason why Wilkins was the guy on Sunday. When the Oline is struggling in the run game, you need a running back who can make defenders miss and create yards.

Wilkins has forced 16 missed tackles on 49 carries. Taylor has forced 7 on 100 carries pic.twitter.com/e4ELPuhfQd

That is really what you get with Wilkins. He is not a burner or a player who is going to break off huge runs or chunk plays. What he will do is be decisive in his touches, break tackles when he needs to, and create yards for the offense. For a team that is struggling to get a good push up front and open lanes for their running backs, that may be what the Colts need right now. Here he just takes the sweep to the outside and makes the first man miss again for yet another big gain.

Make the first defender miss and good things will happen. It wasn’t an exceptional game from the Colts OL on Sunday. They were able to salvage it though and have a good day due to Wilkins being able to fight through contact and be quick and decisive in his reads pic.twitter.com/ti64TPIYpv

Now with Taylor it is a bit of the opposite of Wilkins. While I think he has gotten a lot better with his vision in recent weeks, I do think he struggles to be decisive in what he is doing in the backfield. He seems to be overthinkning a lot of his reads in the backfield and that is leading to more stuffs and negative plays. He needs to trust his first read and put his head down and go. Here is just way too much dancing in the backfield when he had a lane to his right that would have netted a solid gain.

Really want to see Jonathan Taylor be more decisive going forward. Can have a 5-6 yard gain up the middle behind Glowinski and Smith. Instead he hesitates and loses yards. pic.twitter.com/QVDECwnn6Y

This point is my biggest worry for the young running back going forward. He has only forced 7 missed tackles on 100 carries this year. That is awful for a running back that was taken as high as he was. Now there are likely a lot of reasons for this though from the lack of training camp leading to a steeper adjustment to NFL speed and back to the problem of overthinking. I don’t think this is an innate inability to make defenders miss when it comes to him. Still, it is something to keep an eye on. Here he has a prime chance to create yards by making the linebacker miss in the hole but he fails to do so.

Maybe I’m nitpicking here but I just want to see better efficiency from Taylor. This run should get 5-6 yards on the outside with Taylor’s speed and the space he has. He has to get around this linebacker or at least fall forward for positive yards. 2 yard gain here is not great pic.twitter.com/amNxQvVFZE

So these are two big negatives but there is reason why Taylor went so high in the draft. He is an absolute freak in terms of his combination of speed and power. He isn’t getting a chance to truly showcase it because of these other flaws but he does have the ability. For the Colts to really get him confident and in a rhythm for the rest of the year, they have to find ways to get him in open space. They have already done it a few times like on this play here and it has worked out amazingly when done right.

This is such a beautiful play design by Frank Reich. Utilize Nyheim Hines on the pre-snap motion and fake the swing pass before coming back to Jonathan Taylor on the screen. Great blocks by Glowinski, Nelson, and Pittman Jr on the outside too. pic.twitter.com/YrD6ptzAWF

This is a bit of a tough decision for the Colts as I see merit to giving either one the majority of playing time down the stretch. First and foremost though, the biggest issue with the Colts running game has been the predictable play calling and offensive line struggling in run blocking up front.

With those two issues in mind, Wilkins may be the back to go with. He is unspectacular but he gets the hidden yards that do show up in the box score. He is quick, decisive, and understands how to get positive yards and make defenders miss. If the line is struggling, he’s the type of back you want to make things happen and stay efficient.

On the other hand, the Colts have a tough schedule coming up and you want your most explosive playmakers on the field. While Taylor hasn’t been like his college self, he has still made a few plays that someone with Wilkins’ speed and power just can’t make. If the Colts plan to get Taylor in space more, I could absolutely see him getting more touches.

In the end I think the answer is a healthy mixture of the two backs. Maybe starting the game with Wilkins and churning out positive runs while Taylor spells until the fourth quarter when his fresh legs can run around a tired defense. All I know is the Colts do have a lot of work to do to improve this rushing offense and both of these backs are going to need to step up in the next two months.