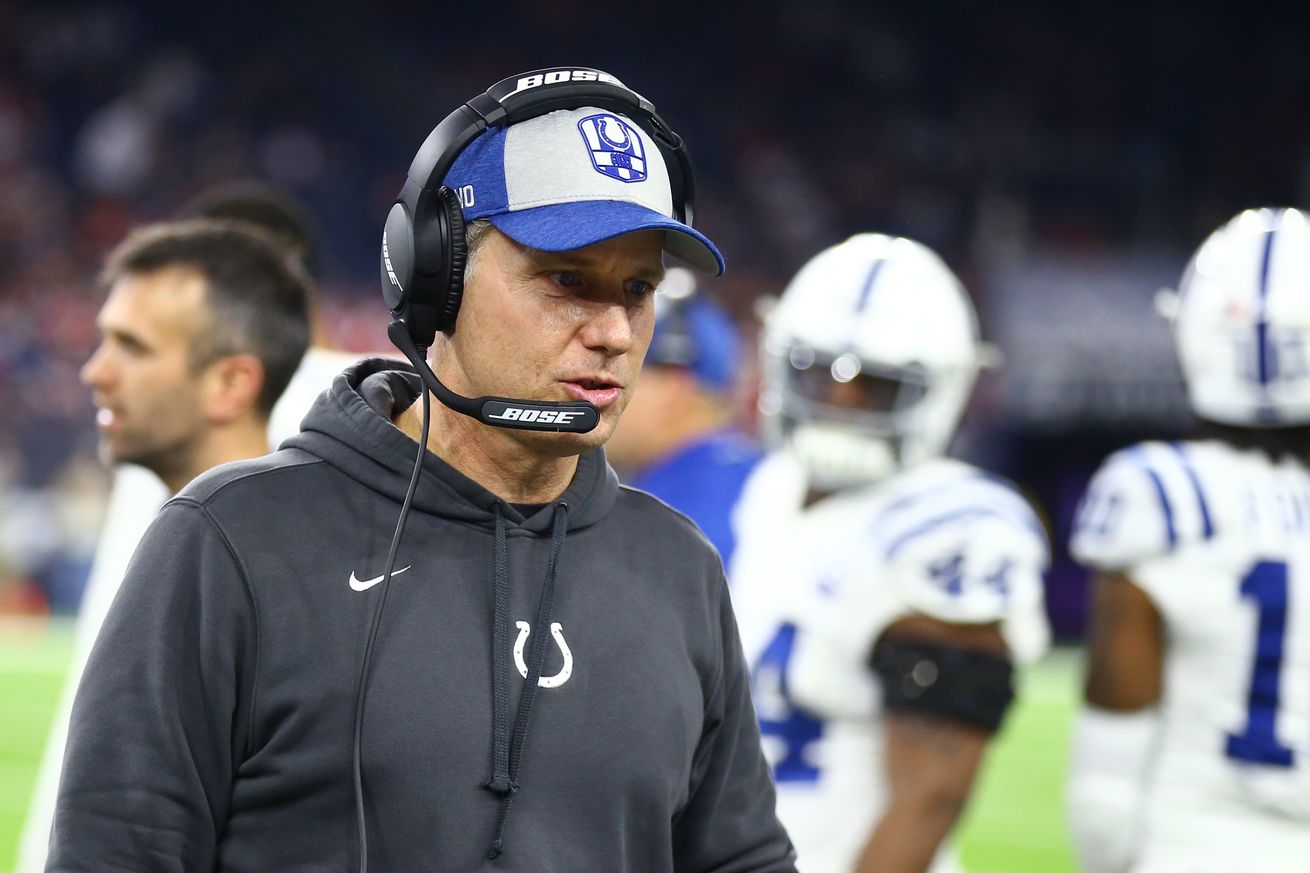 The Indianapolis Colts struggled early to generate any pressure up front in 2018 under new Defensive Coordinator Matt Eberflus. Much of the blame did simply fall on the lack of personnel up front as a notably young roster was still developing as a unit. What Eberflus was then able to do with the unit for the rest of the season was pretty remarkable and is something that is rarely discussed among Colts’ fans. He created pressure with the players he had. It wasn’t traditional, but he did everything he could do to create that pressure.

He stunted and twisted his defensive line on nearly every pass rush rep in order to create lanes for his rushers to get home. He unleashed his talented rookie linebacker Darius Leonard and had him rushing the passer quite often (and to the tune of seven sacks as a rookie). He also isolated his top pass rusher in Denico Autry with as many one on ones as he could scheme up. The biggest talking point though was the creation of what we here like to call the “Kenny Moore blitz.”

In today’s article, we are going to be talking about the basis for the “Kenny Moore Blitz” from the Rod Marinelli defensive system and discuss how Matt Eberflus was able to take a wrinkle from that playbook and turn it into a staple for the Colts.

As I have said in multiple articles when discussing Matt Eberflus with the Colts, he gets a lot of his system from his former mentor in Dallas Rod Marinelli. Marinelli is a veteran defensive line coach and defensive coordinator who was a key member of the coaching staff that formed the the legendary Tampa 2 defense with the Buccaneers of the early 2000’s. One of the main elements of the Tampa 2 and the scheme that both Marinelli and Eberflus operate is keeping everything in front and winning the explosive play battle. While these two typically keep it conservative (both in the bottom third of the league in blitz % over the past two seasons), they know when to be aggressive with their play calls.

Looking at some cornerback blitzes from Marinelli’s time in Dallas and you will see one flaw despite the successful rush attempt here. The blitz is very easy to recognize and Eli Manning even points out to his running back to pick up the free rushing slot corner to the left. While Orlando Scandrick does a great job of still winning his rep, this was a bit of a concern with Marinelli when going through his cornerback blitzes.

Before writing this article, I actually skimmed through some Dallas Cowboys fan forums from the past few years and there were so many complaints about how obvious the cornerback blitzes were. I would have to agree with some of those complaints too as there wasn’t a lot of disguise going on from Marinelli on these plays. The biggest thing I saw though was the basis for something more, especially with the blitzing linebacker. That blitzing linebacker frees up the slot corner blitz almost every time and that was something to note.

Finally it hit me when watching more of these blitzes. Eberflus realized the one of the main keys to a successful cornerback blitz is disguise. Here is a perfect clip from the Cowboys in 2018 and how successful this play can be with a good disguise. The linebackers crowd the center on the interior and the slot corner is lined up in an off man look. Even as the linebackers drop out, the five offensive linemen are unable to block the four rushers as the slot corner runs free for the sack. This led to me coming up with the two keys to success on the “ Kenny Moore Blitz” that we will talk about in the next section.

The Two Keys to the “Kenny Moore Blitz”

One thing that Eberflus clearly learned from watching Marinelli is that you can’t be obvious with your blitzes if you need to create pressure. As a result, Eberflus does an excellent job of disguising who is blitzing on almost any designed blitz call. For example, if you are quarterback Nick Foles here making line calls, who do you think is blitzing? The Colts are showing five on the line with the four defensive linemen and Darius Leonard over top of the center. Take a guess on which players are blitzing here.

Did you guess seven total rushers with Kenny Moore II coming up with the sack at the end? If not, I totally get it as it is the mistake that anyone would make here. Including the opposing quarterback. The Colts on this play sneak Moore II up last second and bring box safety Khari Willis on the blitz. Leonard also delays his blitz in order to get a free rush as well. This is the element of disguise and how it leads to sacks. Make the offense guess at who is actually coming on every play.

The origins of the play for the Colts really came in week 11 of 2018 when the team was desperate to create more and more pressure. Early on though and it is easy to see the confusion and disguise up front by Matt Eberflus. Linebackers are stacking the middle, the safety creeps up, linebackers are backing off… it is a whole lot of movement pre-snap. This confusion leads to Moore II’s first career sack with the Colts.

The Colts don’t even need to be showing blitz. Here against the Texans, it looks like a typical four man rush up front with no extra rush coming. That changes right at the snap as Moore II and LB/SAF Clayton Geathers both get great jumps on their rushes. Geathers takes up all the attention in the middle and this leads to a free rush for Moore II on the outside. Notice that due to how the play is disguised, the Texans were unable to block five rushers with six players in blocking. Only a great scheme can create a free rush without the numbers advantage.

The designs on these blitzes are so complex yet so effective. I mean look at how insane this next play is. The Colts are showing like they are rushing six with Leonard and Geathers in the box. At the snap though, Geathers bails and Leonard takes the running back. To further add to the confusion, Eberflus stunts both sides of the defensive line which causes havoc on the interior. Then on top of all that, Moore II sneaks in the backside for the quick sack. Again, look at the numbers game. The Texans were unable to block five rushers with five linemen due to scheme and disguise.

Last play we are going to look at for scheme before I jump to my second point but again look a this disguise. Three down linemen with three off ball players standing over the center. At the snap, both Geathers and Leonard drop out while Anthony Walker does a delayed blitz and Moore II sneaks in backside. Just to keep bringing up the same point too, the numbers advantage is taken away again. Six blockers on offense can’t block five rushers from the defense (the right guard is just blocking air). This is what makes Eberflus so good at scheming up blitzes. Also, look at the play by Moore II on this one. It is a perfect segue to my next point on these rushes…

A perfect scheme or design can do a lot of things for a defense but at the end of the day, players need to make plays. The Colts have found the perfect slot corner for this team in Kenny Moore II. While he is able to capitalize on free rushes that he is given, he also makes a good deal of plays on his own as a pass rusher which is a testament to his stardom. In 2018, Eberflus sent Moore II after the passer 43 times. That is almost four times as many rushes as Marinelli rushed a single corner since 2014 with the Cowboys. Moore II is a special player off the edge.

Are cornerbacks supposed to be able to effortlessly toss running backs? Moore II makes it look pretty routine here. The Chiefs running back diagnoses the blitz quickly but the powerful 5’9” 180 pound corner is too much for him. Moore II does a great job of taking on the block, discarding it quickly, and locating the quarterback for the sack. Star player making a star play.

Kenny Moore II may be spending too much time with the defensive linemen. Here he executes what appears to be Von Miller’s patented “ghost” move as the outside rusher. All jokes and comparisons aside though, this blitz works because of these two equal factors. It wouldn’t be nearly as effective or dominant without one of them. As we see a lot in the NFL, there are players with great talent and there are great schemes out there. When you can fit a talented player perfectly into a great scheme though is when you get great results. This is why Moore II leads all corners over the past two seasons in sacks.

The main point of this article was to point out how these two great things can’t live without each other. Matt Eberflus has a skill at disguising and crafting some incredible blitzes for the slot corner to be in great positions for sacks. While he can put players in positions, it takes a great player to go out there and execute.

Overall this blitz was born out of necessity and it will stay due to effectiveness. Moore II has become one of the best overall slot corners in the NFL and a big reason for it is the versatility he brings on plays like this. Look out for more sacks on the “Kenny Moore Blitz” in 2020.