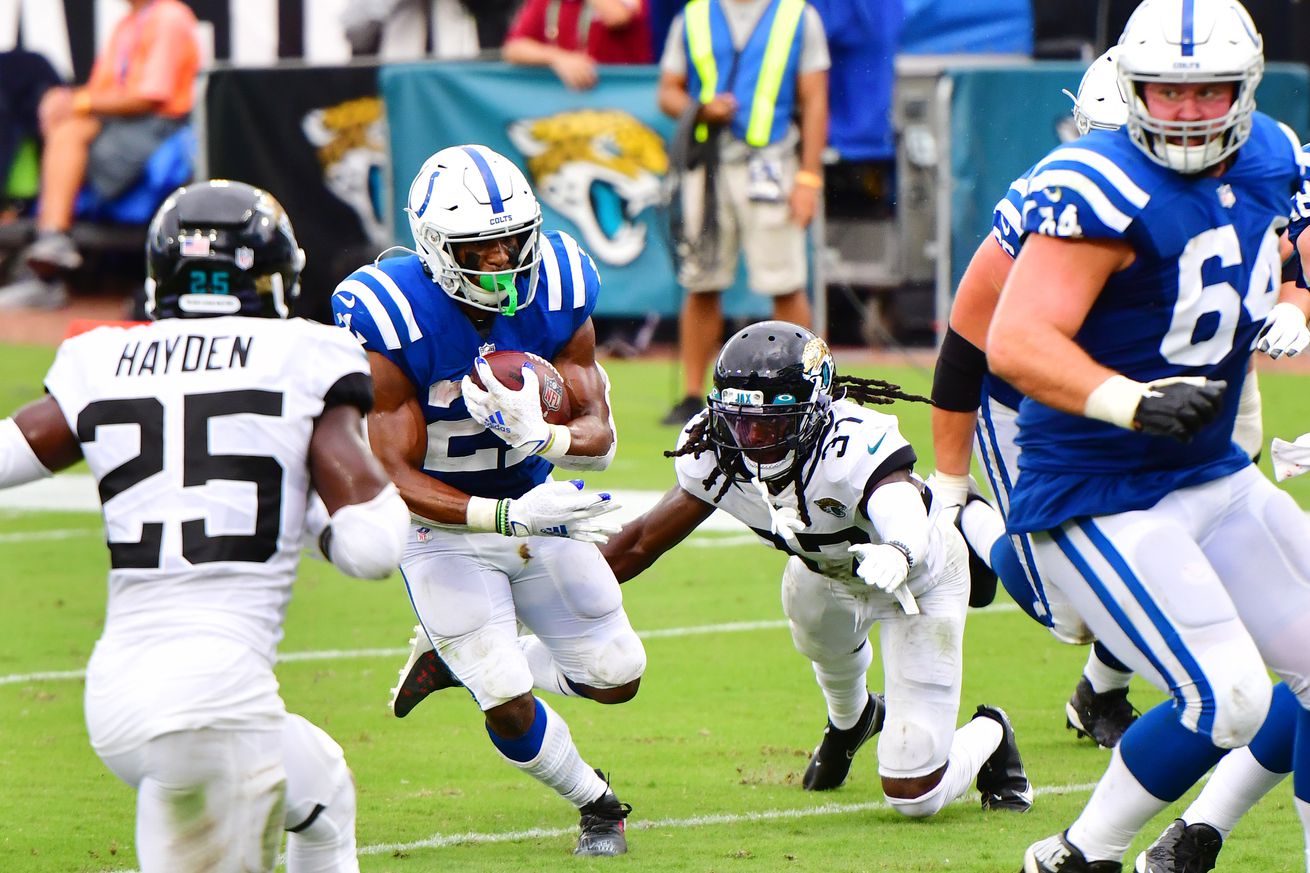 The young speedsters stood out in week one

The Indianapolis Colts got off to a disappointing start in the 2020 season with a 27-20 loss to the Jacksonville Jaguars. While there were a lot of negatives in the game and blame to go around, today we are going to focus on a couple positives from the game. The two stars of the team in game one combined for 22 touches for 153 yards and two touchdowns in the first game. Campbell was extremely effective in the passing game while Hines was vital in the red zone for the Colts.

Today we are going to look at the play of both of these players in week one and talk about why both could be in for big seasons.

*Apologies for this film room only including Broadcast film. NFL Gamepass has been a pain this week

A running joke I’ve made over the past two seasons is that nobody in this world loves anything as much as Nyheim Hines loves the spin move. I actually asked Hines about it in the offseason when I talked with him and he said, “I don’t know why I do it but it’s just become instinct over the years. It’s based off angles and more of a last resort thing though.” That is what happens here as linebacker Myles Jack is just about to hit Hines from his blindside before Hines puts a nasty spin on the linebacker to gain positive yards. Great run from a player who we’ve seen this from a ton of times over the years.

I will say again for the 1000th time. Find someone who loves you as much as Nyheim Hines loves to spin on defenders. pic.twitter.com/agGrjCIrVj

This next play is the first of two touchdowns on the day for Hines. To start this breakdown, I do want to say that there is this misconception about Hines as a runner. With him being the explosive scat back type for this offense, the perception is that he would exceed more on runs outside the numbers on stretch plays and toss plays. That is not his game though as he doesn’t have the vision to really be great on those runs. His running game is at its best when he can just run downhill and hit an open hole with his elite speed and explosion. Here he explodes though the open lane behind Quenton Nelson for the first touchdown of the season.

Really nice burst through the line on this TD by Hines. He is at his best as a one cut and go running back. pic.twitter.com/snCzQp7VBa

Speaking of Hines’ best trait being his ability to get the ball and go downhill, let’s look at his second touchdown of the day. It is a beautifully set up screen play that both Hines and the offensive line set up well. Kelly gets a great block at the second level and Hines is able to quickly get into the end zone before the rest of the defense can react. Just a great set up and a good play by Hines to find the end zone and give the Colts the lead.

I did a film session recently with Jake Arthur of Colts Sports Illustrated where I said that anytime Parris Campbell gets off man coverage in the slot this season, I’m throwing him the ball. I’m glad that Philip Rivers and I agree on this. Campbell gets off coverage early in this one and Rivers sees the mismatch right away. With Campbell’s speed and quickness, there are few corners in the league that can cover this route. The result is a big chunk play of 21 yards to start this game.

Off man coverage against Parris Campbell is always a win for the Colts. pic.twitter.com/7rpGob5eLy

Different play with almost the exact same result. The Jaguars show blitz early in this play and Rivers is able to quickly diagnose the mismatch. With the slot corner stepping into the box, Campbell is left one on one with the safety in off man coverage. This is too easy of a matchup as Campbell dusts the safety for an 18 yard gain. Look at the footwork by Campbell at the top of his route. Great feet to quickly cut and nearly make the defender fall on the play. This is what the Colts drafted him to be and it was outstanding to see it in week one.

Anytime Philip Rivers sees off man coverage, this should be the call. There is not a slot corner in this league who is covering Parris Campbell on this crossing route in off man (probably a few but let me be hyperbolic). I love that this is finally a thing with a good QB pic.twitter.com/9YzK0FabKS

While this play is a remarkable throw by Rivers, Campbell deserves some credit here too. He doesn’t get a ton of separation on the deep out route but it is enough to get his quarterback to trust him. The ball is perfectly placed on the outside shoulder and Campbell makes a really nice grab away from his frame for the first down on third and seven. The biggest takeaways on this play are that Rivers showed a lot of trust in the young receiver to make this play and the fact that Campbell made a tough catch in traffic on the sideline. He didn’t make a ton of catches like this in college or last season so this was a great thing to see.

Absolutely bonkers throw by Rivers but a really nice play by Campbell to separate against CJ Henderson and make the catch away from his frame. pic.twitter.com/cJgZrAFKFe

The final clip of today’s film room showcases something that we need to see more of this year. Parris Campbell has always been great in space since his college days and we saw flashes of it last year. Here we get a successful end around where he gets to the outside and picks up the first down. Hopefully this is something we see more of this year as the team tries to create more pays for him with the ball in space. He is too special of an athlete to not have the ball in his hands. He finished the day with seven touches though as the team really made it a point of emphasis to get the young receiver involved.

More of this going forward please. Campbell with the ball in his hands and in space can only lead to good things. Great block by Mo Alie-Cox here too. Oh and also #GetRidofTauntingPenalties pic.twitter.com/gEN8SB2FP1

The Colts had a disappointing loss on Sunday but there were a couple bright spots on the team. Nyheim Hines built up quite a bit of momentum late last year and it appears to have carried over a bit this year. Hopefully he can break off a few longer plays on his catches this year but he is already being targeted and involved early in this offense with Rivers.

Parris Campbell is player that many people gave up on last year but showed promise that he could turn it around in year two. It was just great to see him finish a productive game and stay healthy out there. The offense ran through him for a lot of the game and he made almost every play that went his way. The Colts classify chunk plays of plays over 16 yards. Campbell accounted for three chunk plays on Sunday with gains of 17, 18, and 21. Expect his impact to continue in that department.

Overall I think these two are in line for productive seasons with the Colts. Hines will get a lot of run now that Marlon Mack is out for the season and he already looks like a favorite target of Rivers. Campbell is a mismatch nightmare in the slot for defenses and Rivers seems to notice that early as well. These two speedsters project well as key X-factors in this offense for the rest of the season.