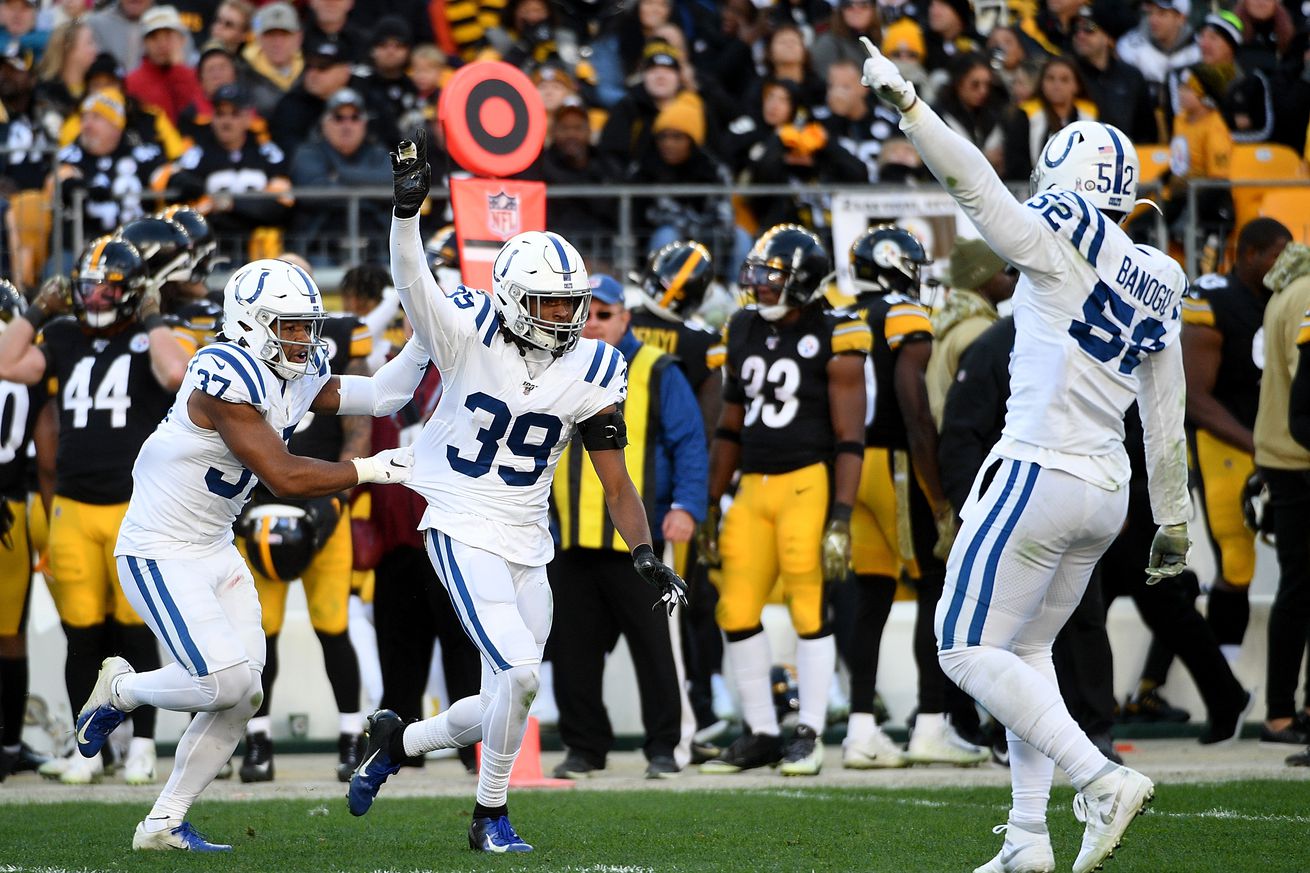 The Indianapolis Colts had a strong rookie class in 2019. Cornerback Rock Ya-Sin started off slow but improved a ton down the stretch and was a solid starter by the end of the year. Linebacker Bobby Okereke was one of the brightest spots of the team as the rookie linebacker was outstanding in almost every way. Even day three safety Khari Willis flashed a ton of potential on the year and looks like a long time starter at strong safety. Another player who was very intriguing was fifth round safety, who was quickly converted to corner, Marvell Tell III.

Tell III was a three year starter at free safety for USC in his collegiate career. As the draft process continued though, it looked more and more like teams would be interested in transitioning him to corner rather than playing him at safety in the NFL. I actually interviewed Tell III the day before the draft in 2018 and asked him about a potential move to cornerback. Here is what he had to say about the potential move back then:

I’m a quick learner and I played corner in high school so I’m not completely foreign to it. If I can just get to training and work on that craft, I can perfect it.

In today’s film room, we are going to be looking back on Tell III’s rookie season and see how well he played in his first year at corner since high school and see where he can stand to improve as he heads into year two.

Let’s start with the biggest positive in Tell III’s game as a rookie. Being that he is a former safety and has great size at 6’2” 200 pounds, you would think that Tell III would be a great tackler at CB. Well the stats would completely back that up as he had 19 tackles last year and missed 0 tackles which gave him a perfect tackling efficiency rating by Pro Football Focus. He also was credited with six run stops and a forced fumble on the year. In a scheme that makes tackling a priority on underneath throws, Tell III fits very well here.

Tell III is a great form tackler which again is a credit to his safety background more than anything. Here against the Denver Broncos, the Colts are facing a third and six. Joe Flacco dumps a pass off to one of the bigger and more physical receivers in the league in Courtland Sutton. Tell III speed turns out of his coverage and gets into position for the tackle. He gets a good clean wrap up on the much bigger receiver and is able to drag him down a yard short of the sticks to force a fourth down.

This next clip is the highlight of the season for Tell III and almost helped get the Colts the win against Pittsburgh. On third down late in the game, the Steelers dumped the ball off short to Jaylen Samuels in the flat. Tell III comes up from his zone spot and gets in position. He does what every little league coach tells their players to do and gets his hat on the ball and forces a fumble on the play. This was near perfect form and a great hit to nearly turn this game around for the Colts.

This last clip shows off his strength and physicality. This is a tight end bearing down on him and Tell III is able to hold his ground and make a clean tackle. Look at how he stops the tight end in his tracks and ends the play right there. This aspect is so vital for the Colts’ defensive system as their cover two scheme basically invites teams to take the short pass in the flats or over the middle. This strategy only works if the entire defense, from linebackers to cornerbacks, can consistently make tackles in front of them. Tell III excels in this area.

I was pleasantly surprised by the ability that Tell III showed in zone coverage last season. Again though, I think a lot of that reverts back to his safety background as he is at his best with the play in front of him and his field of view not tunneled in on one player. This first play showcases his speed and quickness out of his backpedal. He sits on the sticks in his zone coverage and breaks quickly on the out route. This is a very poor throw but even if it was a good one, Tell III would have been there to make a play.

This next play is even more exciting as it combines his physicality as a tackler with his speed out of his break in zone coverage. Quarterback Ryan Fitzpatrick tries to hit an out route for the first but Tell III reads the play well and comes off his outside receiver at the perfect time to make a play. I love the physicality he showcases on this play as he is able to separate man from ball and get the defense off the field on third down. I love the ability Tell showed in cover two last season and I’m curious to see how this translates if the Colts play a bit more cover three or even quarters in 2020.

So here is where we get to some inconsistencies in Tell III’s game. According Pro Football Focus, Tell III gave up 290 yards receiving and two touchdowns and allowed a passer rating against of 111.2. Those numbers aren’t horrible but obviously there is some room for improvement in there.

Looking at the film of his coverage, I think there is a lot to like in press man coverage. He is a long and physical corner and when he uses his arms to disrupt receivers at the line, he is very effective. This rep against Sutton on the red zone fade is perfect. He stays square to the receiver, stays patient in his steps, and disrupts the timing between the QB and WR. Great rep against a receiver who was having his way all game.

This is another incredible rep out of press man coverage. First off, his patience and physicality at the line is what wins this rep. He is able to direct the receiver where he wants him to go and really throw off the route. Once he wins at the line, he is able to direct the vertical route up the sideline, pinch the receiver to the sideline and make the throwing lane smaller for the quarterback. Once he gets the receiver in optimal position, he is able to confidently turn and locate the ball in the air and nearly get the interception. This is a teach tape for how to press a vertical route.

The struggles come in off man coverage. Tell III is a great athlete and has the ability to excel in this area. The issue right now is technique and comfort level. He needs to have better position, be more physical throughout the route, and locate the ball better from this coverage to be anything more than a cornerback four for this team. While that sounds harsh and a bit doom and gloom, it really isn’t. He is still adjusting to the cornerback position and this was going to be the most foreign area for him as a safety convert. He has the traits to be good in this area so it’ll just all come down to development. Here is an example of his struggles in off man though as he gets beat over the middle for a long touchdown by Jaguars WR D.J. Chark.

Here is another quote from my interview with Tell III all the way back in 2018:

I feel like that if I get taught to be a corner, I could be a great corner.

After looking back on his rookie film, I think this statement is true. He really can be an above average cornerback in this league. He is a physical corner who excels in short area zones and can come up and make tackles in both the pass and run game. I also am really intrigued by his ability as a press corner as he had a few A+ reps in that coverage as well.

The biggest concern and the only thing truly holding me back from starting up a Marvell Tell III bandwagon is his struggles in off man coverage. With the Colts reliance on zone, off man is a coverage that these corners have to at least be decent in so the team can mix and disguise what they are doing. Tell III has some work to do here as he doesn’t have the confidence or technique yet to be efficient enough in this coverage.

Overall, I like what I saw from Tell III as a rookie. He had some bad moments for sure but I think it was mostly good from the fifth round rookie. With more development, a bit more playing time, and having the ability to settle in as the team’s fourth corner in 2020 should do him some good. I think he’ll develop nicely into a good starting cornerback in this league.