Late last month, the Colts agreed to sign former Vikings cornerback Xavier Rhodes to a one-year deal. At the time, it was reported that he’d earn somewhere around $5MM. On Thursday, we learned that it’s not quite that lucrative. 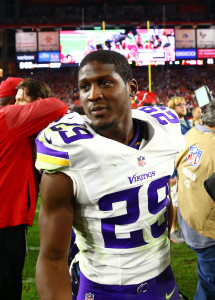 Rhodes ‘s deal has a base value of $3MM including a $1MM signing bonus, Tom Pelissero of NFL.com tweets. Outside of the signing bonus, the deal has no other guarantees, though he can add an extra $250K if he hits certain incentive milestones.

The Vikings dropped Rhodes midway through March, terminating his five-year, $70MM+ deal with three seasons to go. The new contract represents a serious pay cut for the former first-round pick – his average annual value has dropped by $11MM and he’ll have to play up to par in Indy in order to keep his value strong moving forward.

The Vikings reportedly tried to re-sign Rhodes, but his Colts contract indicates that it probably wasn’t a very strong offer. Or, perhaps, the Vikes made him a similar pitch, but he wanted a change of scenery. Either way, the Vikings are now down three former first-round corners after watching Rhodes, Trae Waynes, and Mackensie Alexander switch conferences.

Now with the Colts, Rhodes will try to fill the void left by the Pierre Desir release along with slot specialist Kenny Moore and Rock Ya-Sin.