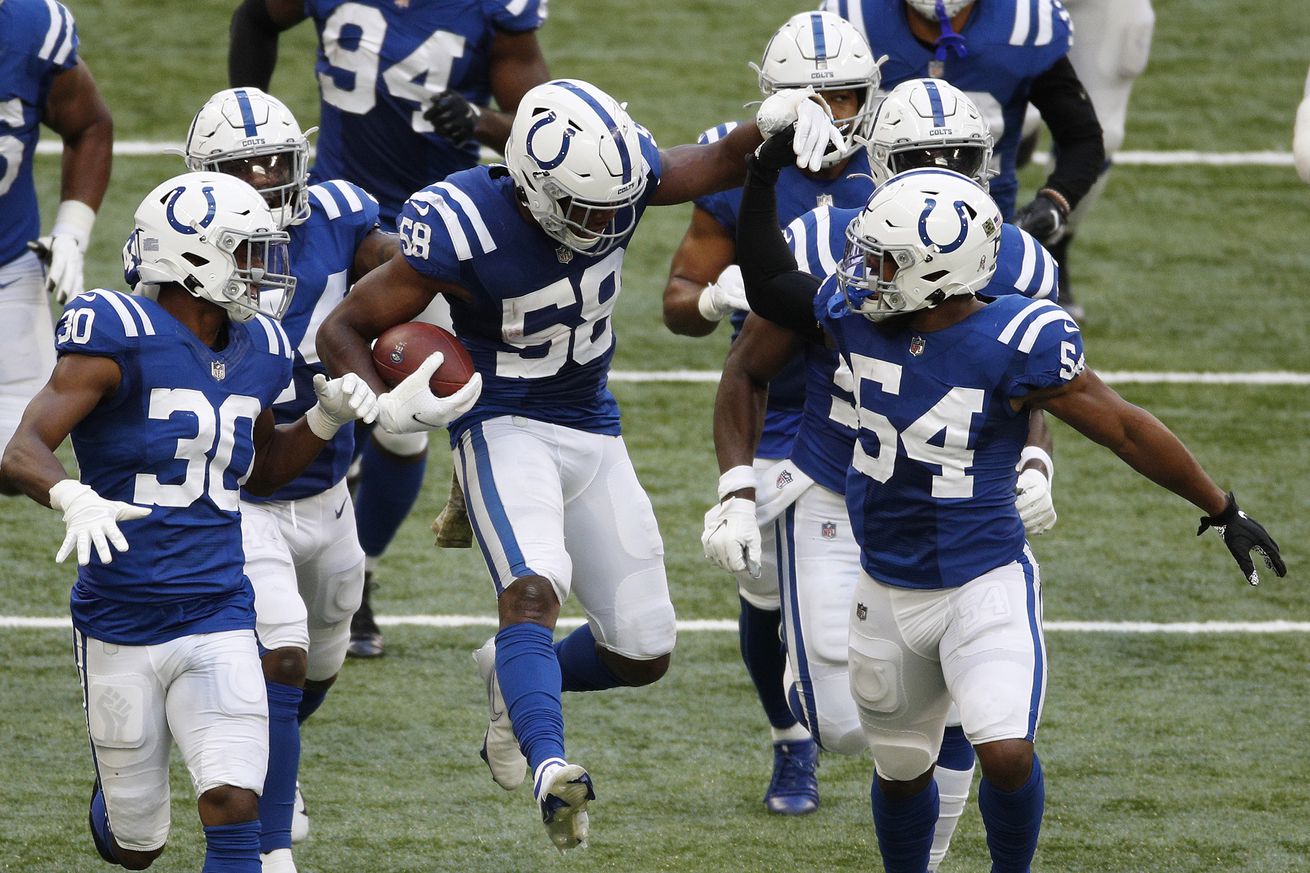 The Colts had a chance to prove they can run with the big dogs this weekend when they hosted the Baltimore Ravens in their week 9 contest. What they proved instead, is that they not only cannot run with them, but that their offense can’t even limp with them. Despite a dominant first half defensive performance, the Colts found ways to give away the ball, and struggled to connect on their downfield passing opportunities. They (still) couldn’t run the ball effectively, and were totally shut out offensively in the second half. In a game where the defense limited Lamar Jackson and the Ravens offense to 17 points, the Colts offense was unable to capitalize, and dropped to 5-3 with a very unpleasant slate of games ahead. Here are the winners and losers from week 9.

Where do you start with the Colts run defense? This is an elite unit when facing the run. The addition of DeForest Buckner and the rise of Bobby Okereke have made this group brutal to face on the ground. The Ravens found that out Sunday, because it took them 38 runs to get to 110 yards on the ground, and 92 of those yards came in the second half. This was a good Ravens rushing team, and the Colts shut them down for a half, and kept them limited, even when they got their offense humming. Darius Leonard accounted for 15 tackles, himself, with Okereke notching 9.

It was what they did when the Ravens were driving early in the third quarter that gets the run defense the win for the week, though. DeForest Buckner knifed through the offensive line and punched the ball out of the hands of Gus Edwards, just as the Ravens offense was threatening to score. Darius Leonard scooped it up, bobbled it around, and into the hands of Bobby Okereke. The speed and playmaking ability has been on display all season for these guys, and against one of the best rushing teams in football, they looked the part of a stout run defense for most of the game.

It is fair to point out that they have struggled to keep their smothering performances going for full games at a time, but some blame should rest on the offense asking that of them by no-showing.

The Colts desperately need juice from their offensive skill position players, and they got a little bit today from rookie receiver Michael Pittman Jr. He led the team with 56 yards receiving with 4 catches on 7 targets. Pittman Jr. is the perfect complement to speedy players like T.Y. Hilton and Parris Campbell, and it is easy to see what the Colts liked about him as a big blocking possession receiver. Hopefully we will see his involvement in the offense increase as the season progresses, because he has the kind of size and skill the team really needs to utilize in the passing attack.

My goodness was this a game for AQM! In a DeForest Buckner-like display of length and speed, he closed the gap on Lamar Jackson in the open field for a 13-yard sack that was truly an impressive feat of athleticism. It was one of the more impressive individual efforts you’ll see in this game, and it wasn’t his only tackle for a loss. Muhammad has been a very good player for the Colts, and his strengths were on display Sunday.

When the Colts re-sign Grover Stewart to a big deal this offseason, don’t be surprised. If you haven’t been paying attention, you may have missed Stewart’s rise, but he’s one of the better nose tackles in the league, and he had a really solid day Sunday. His first big play of the day came on an early 3rd and 3 for the Ravens. Lamar Jackson ran the ball, and Stewart made Bradley Bozeman look like a little boy. He ran Bozeman into the backfield, cast him aside, and wrapped up Jackson for a loss. I an unsure why this wasn’t recorded as a sack, because it certainly should have been. Regardless, it was an impressive play. Later in the game he had another big third down stop when he shed his blocker with ease to blow up a play in the backfield and prevent a conversion on 3rd and 1. Stewart is a name to watch for a big contract this offseason.

When Lamar Jackson gets a chance to flee the pocket, he can do real damage. That’s what makes Autry’s sack in this game so important. On 3rd and 6 the Colts got pressure off the edges. Jackson tried to scramble up a gap in the interior, but Autry was able to throw off his blocker and wrap him up short to force a punt. Autry leads the team in sacks on the season with 5.

It has not been a good showing for the rookie running back. The Colts have the worst running attack in the league, and he’s a lot of the reason why, through 8 games. Taylor second guesses himself, makes bad reads, struggles to shed tacklers, and doesn’t seem to ever hit the top speed that made him worthy of being one of the first running backs off the board on draft weekend. In this game, he added another wrinkle that killed the Colts. He fumbled the ball away. Fumbling the biggest knock on Taylor coming out, and to his credit, it hasn’t been a problem so far this season. Here, though, it reared its head in the worst possible place. His fumble went all the way back for a defensive touchdown, keeping the Ravens in a game when they were being absolutely shut out by the Colts defense. Not the comeback you want from a guy who was benched last week in favor of Jordan Wilkins.

This offense is not good, and that falls at Reich’s feet. Is there a talent issue? Yes. The Colts don’t have much in terms of their skill position players. Parris Campbell and Marlon Mack are gone. T.Y. Hilton was out for this game. But this team has consistently struggled to utilize the talent they do have. Reich has talked about avoiding predictability, and yet he predictably forces the ball into the hands of Jonathan Taylor on the ground rather than putting the ball in the air and targeting the players who have proven valuable weapons like Nyheim Hines and Mo-Alie Cox.

Hines has shown over and over that he provides a matchup advantage as a passing weapon. He had an great showing against the Lions, and was targeted just 3 times Sunday, but it is less about how much he was targeted than about how he was targeted. Hines got looks twice on screen passes and once as an outlet option. As one of the fastest players on the offense, those just aren’t creative enough looks to get him involved.

As for Mo-Alie Cox, you might be surprised to know that Cox is ranked 3rd on the roster in yards per reception with an average of 16.1. He’s also second on the team in total receiving yards, and tied for second in receiving touchdowns. Trey Burton, on the other hand, has averaged 8.1 yards per reception. He has played one less game than Cox and has and still has more targets. Cox is a more dynamic player in every way. He should be a featured weapon on this team, but instead has been relegated to a minor part of the offense.

When you are a talent-poor offense, you can’t just ask your aging QB to carry the team. Reich needs to be better if this team is going to go anywhere in the postseason, or indeed even make it there.

Wow it was a bad game for the officials. As a start, they missed a blatant targeting call that knocked tight end Jack Doyle out of the game and undoubtedly will put him in concussion protocol. It was an easy call, and there is no excuse not to make it. Later in the game, they were happy to make that call against Julian Blackmon on what was also a helmet hit during a Lamar Jackson scramble. It wasn’t that call that was problematic, but the fact that during the understandable scrum that ensued, they allowed Ravens cornerback Marcus Peters to come onto the field and involve himself without penalty was absolutely absurd.

But the pièce de resistance of their awful day was far more devastating. On a deep attempt for Marcus Johnson from Rivers, Marcus Peters got hands on the ball and attempted to make an interception. Johnson broke up the pass as it was going to the ground, and the call on the field was an incomplete pass. This was clearly the correct call both in real time and on replay. Upon John Harbaugh’s challenge, the officials overruled that call and stated that the ball had been caught, fumbled, and recovered by the defense. It was an abysmal call, only exceeded in its badness by Gene Steratore schilling for the officials in his “analysis” of what had happened. This call was devastating, and negated a game-changing turnover by the Colts defense that then had to head right back out onto the field.

The officials haven’t been great for any games all season, but this one changed the whole trajectory of the game.