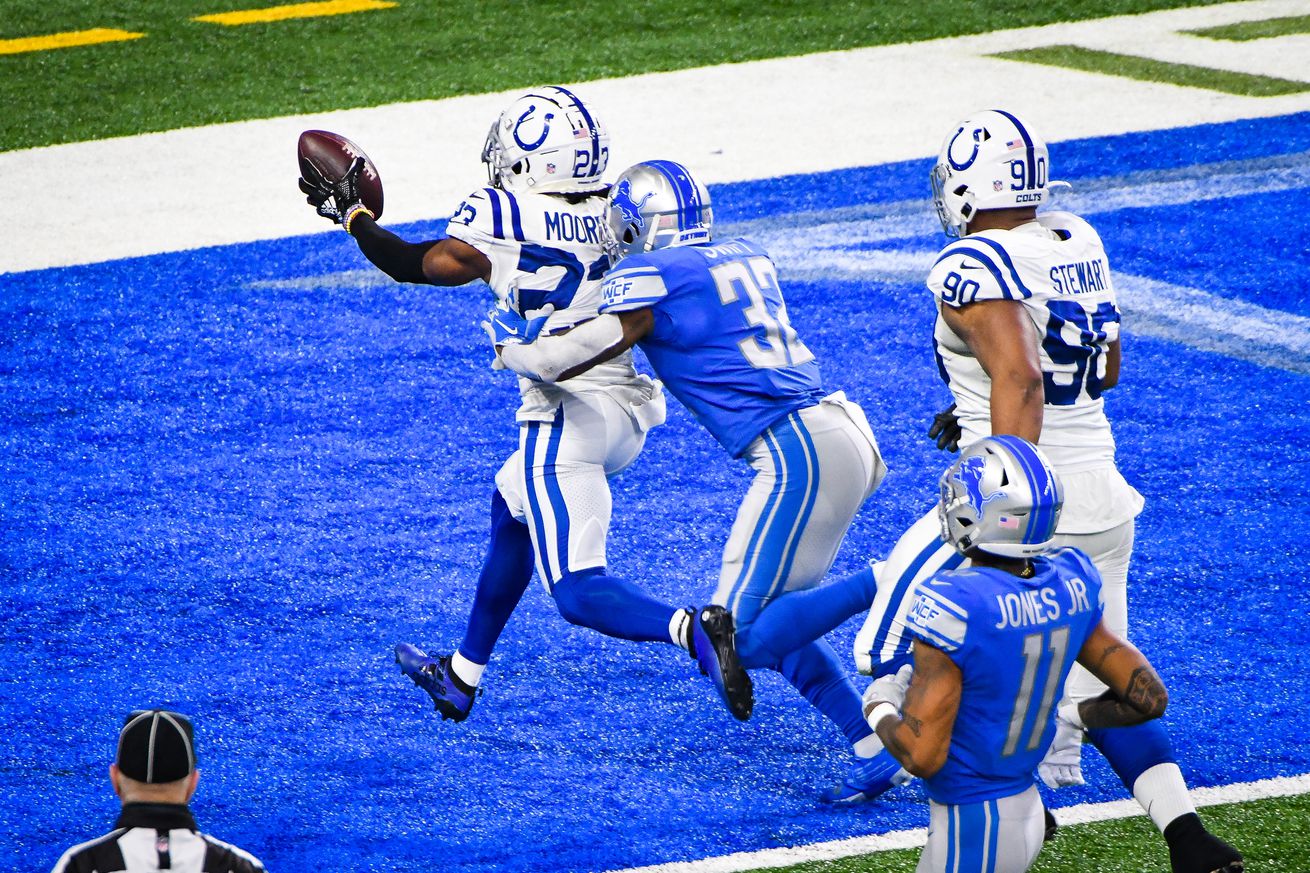 The Colts stamped a definitive win on Sunday, setting the tone for what they could be as they head into the toughest stretch of their schedule. Against the best quarterback they’ve faced all season, they held their own, forcing two turnovers and shutting down the running attack entirely. However, it was the Colts’ offense that really showed up Sunday. Here’s a look at this week’s winners and losers.

Jordan Wilkins truthers unite! Finally, one of the most criminally underappreciated offensive weapons on the roster got some love on Sunday, and the results were about what those of us who’ve watched him closely expected. Wilkins took over as the primary back early in the game, and ended the day with 20 carries for 89 yards and a touchdown on the ground, with one 24-yard reception to go with it. For a team that has struggled to find the holes with Taylor taking the snaps, Wilkins’ patience and vision was a noticeable change.

When one of your best defensive players misses time, it should be noticeable. Likewise, when they return, there ought to be an immediate impact. That’s what the Colts got out of Darius Leonard Sunday. His 9 tackles led the team, and perhaps the most critical play of the game came when he looped around behind the line on a blitz and recorded a sack-fumble of Matthew Stafford that was recovered by Justin Houston. The turnover came with the Lions trailing 14-20, and they’d never get the score closer. Big-time players make big-time plays, and the Colts got exactly that from Leonard Sunday.

I’ll be honest with you, I am not a huge fan of what Nyheim Hines brings to the running game. On the day he had 5 carries for 8 total yards rushing. Through the air though, Hines was the best receiver on the team Sunday. He had one of the more spectacular broken tackle/spin moves you’ll see on his way to a touchdown after a pass into the flat. He then followed it up with a nice go route on the outside to beat his man deep and notch a second touchdown. It isn’t hard to see that Hines offers a dynamic passing presence that needs to get more use. Hopefully this game was a sign of what is to come.

Darius Leonard’s sack-fumble started the cavalcade of points that buried the Lions, and Kenny Moore’s pick six was the dagger that really put the game out of reach. But what might be the most impressive feat is that the Colts totally shut out star wide receiver Kenny Golladay on the day. Being able to limit such a good receiver to no catches is a real feat, and deserves recognition, and Rhodes played a big part in making that happen.

It is true, receiver Marvin Hall had a big game against the Colts, and his solid performance largely came on the back of one 73-yard pass when he was covered by Rhodes. That’s a real problem, but one that deserves to go heavily on the shoulders of the defensive line as well. I clocked Stafford’s time to throw on the play, and from snap to release was 5.26 seconds. Xavier Rhodes is a good corner, but you can’t ask him to cover downfield that long. On the whole, it was a really good day for both these guys.

It was a big day for these two, notching 4 of the Colts 5 sacks on the day between them. Lewis has really come on this season, stepping up exactly like he was challenged in the offseason by Chris Ballard. He’s got 3.5 sacks on the season, and also batted a ball at the line. Autry has shown that the move to the outside was good for him as well. He had two sacks today, and leads the team with 4 on the season. The presence of guys like Justin Houston and DeForest Buckner has clearly been good for business for these two. If they can get Kemoko Turay back healthy, this Colts pass rush could be rounding into form.

For the second week in a row now, Philip Rivers has looked like exactly what the Colts need him to. Perhaps the biggest limiting factor to Rivers’ success has been the team’s tendency to run the ball on 2nd and 10 and put them in bad down and distance situations. In this game, Rivers was excellent. He was 23 of 33 for 262 yards and 3 touchdowns on the day, and he hit 11 different receivers with passes. If this is Rivers rounding into form, he couldn’t have picked a better time to do it.

He’ll say the right things and carry himself the right way, but this game must have come as a major blow to rookie running back Jonathan Taylor. With 10 of his 11 carries taking place in the first half, Taylor just wasn’t getting it done, and the Colts decided to give the reins to Jordan Wilkins. The results speak for themselves. Wilkins thrived and helped the Colts offense find balance. While I certainly think Taylor can find his way, it is frustrating to watch your 2nd round running back struggling. The Colts needed him to be a bona fide star to justify that early of a pick at that position, and he just hasn’t looked that way. Hopefully RB coach Tom Rathman can get him on track going forward.

With two catches for 9 yards, T.Y. Hilton was again, a complete non-factor. He headed to the locker room just before the half with a groin injury, and never returned. Perhaps the biggest blow is that in years past, the absence of Hilton would have meant something. Sunday, it didn’t make a difference at all.

For a player who has ceded snaps to second year linebacker Bobby Okereke, his performance in this game wasn’t great. Walker plays fine as a run defender, but struggled mightily in coverage. He was unable to get out in coverage of the Lions’ tight end Jesse James on a swing pass, and gave up a 23-yard gain. On the very next play, his slow reaction to Kerryon Johson leaking out to the flat resulted in a red zone touchdown that brought the Lions within a score. He is regularly picked on by opposing quarterbacks, and his strengths are also strengths of Okereke.

The rookie kicker hadn’t missed a kick since week three against the Jets, and had been exactly what the Colts needed him to be. The last thing anyone wants to spend time talking about is a struggling kicking game. However, in Sunday’s game, he missed two extra points, slicing them just right on both attempts. Hopefully this was a strange hiccup, because the last thing we want is to be talking about kicking over the next few weeks against top level opponents.