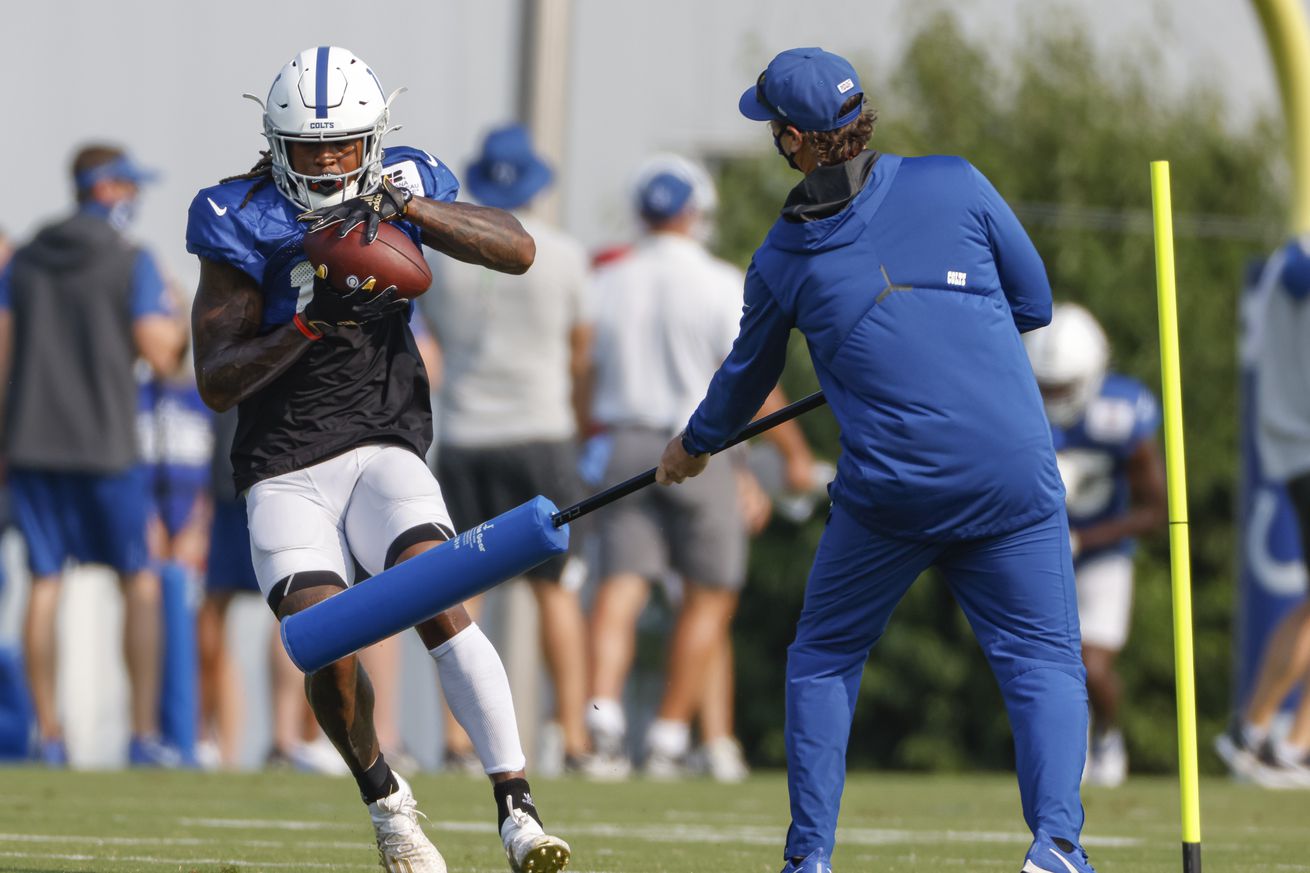 What are the biggest questions heading into the season

The Indianapolis Colts wrap up Training Camp this week as the roster cut down day is scheduled for less than a week from now. It has been an interesting Training Camp this year as the Colts’ have basically had to simulate preseason games in practice with the players they have. While it has been an odd set of circumstances, this team seems ready to go for the regular season. Head Coach Frank Reich even said today that this is the strongest team they’ve had in camp in his time in Indy.

Before we look ahead to the season though, let’s look at some questions that were submitted to me on Twitter and see if I can shed some light on a few things that you have questions and concerns about.

Do you think the Colts UDFA streak continues and if so, who’s the person that keeps it going? ~ @ivanburden

If I had to say right now, I’d have to say yes. It has been a very impressive streak as the Colts have gone 21 straight seasons with having an UDFA make the opening day roster. This year unfortunately wasn’t set up well for UDFA’s with a lack of preseason and camp time. Still there has been some UDFA standouts in camp. Cornerback Travis Reed has made some plays and appears to be further along than most thought coming in. Wide Receiver DeMichael Harris has had some run with the second team in practice and flashed a bit. Then there is kicker Rodrigo Blankenship who appears to be trailing Chase McLaughlin in the kicking battle but still has an outside chance at making the team.

If I had to guess, I’d say the players with the best chance to make it as UDFA’s are either Reed at CB or Carter O’Donnell at OT (mainly due to lack of depth on the offensive line). I do think we will see a lot of UDFA’s on the practice squad this season though.

If Turay isn’t ready/healthy to start the season, where do we go as starter across from Houston? Why? ~ @bnharlan818

So it is looking worse and worse for Kemoko Turay being ready for the start of the season. Just last week Coach Reich did say that Turay was getting “close” but who knows what that truly means. Luckily he is on the PUP list which means he can still make the opening day roster and not count against the 53 man group until week six, when the team has to either activate him or place him on IR. With Turay being out, I’d expect the starter across from Justin Houston at DE to be Denico Autry to start the season.

Autry has primarily played DT for the Colts the last two seasons but with the addition of DeForest Buckner and the emergence of Grover Stewart, Autry has to slide out to DE in base downs. Expect a heavy rotation there though with Al-Quadin Muhammad and Ben Banogu.

Do you think Reece Fountain makes the 53? Do you see Julian Blackmon being used as CB and S this season? ~ @benJAH983

I do think that Daurice Fountain has done enough in camp to warrant making this roster. He made plays while working back with the third team offense and was even able to move up and take some snaps with the first and second team offense as well. The thing that will always hurt him is that he doesn’t offer much in terms of special teams but I think the Colts like him enough at WR to keep him on the roster. Keep in mind that there are a lot of decimated WR groups around the league right now (Washington, San Francisco, New York Jets, Philadelphia). I doubt the Colts expose Fountain to waivers after the offseason he has had.

For the second question, I do think it will be a while before we truly see Blackmon this season. ACL injuries are no joke and it is tough to throw a rookie into action without Training Camp experience. I do think when we see him this year though, it will primarily be at safety. Blackmon offers great versatility to play outside if need be and in certain packages but I think a majority of his snaps will be at two deep safety.

Do you think Jordan Wilkins provides enough for the team to warrant a roster spot after drafting Jonathan Taylor? ~ @TheSamuelHall

I think the Colts have to keep Wilkins on this roster this season and actually wrote a little film piece on it now too long ago for the site. I understand the logistics of it are a but tricky as Wilkins likely doesn’t see too many carries this season with the addition of Jonathan Taylor to the backfield. Here is how you have to look at it though. First, the Colts have always kept four running backs on the roster under Frank Reich. Second, Wilkins is simply too talented to cut and his production over the last two years speaks for itself. Third and finally, running backs get hurt in this league. It is the nature of the game and you have to have quality depth, especially for a team that likes to run the ball.

I think Wilkins should be safe come cut downs.

Any positions you see the colts looking for after final cuts? Maybe TE, secondary or…? ~ @MikeHopkins16

If we know anything about Chris Ballard, it’s that he has his eye on that waiver wire at all times. It is how we have ended up with players such as Jonathan Williams, Al-Quadin Muhammad, and Kenny Moore II over the years. This year the Colts have few questions in terms of depth but there are still some spots that they could grab a player off waivers. A tight end makes sense especially if Trey Burton misses a few weeks to start the season. Boundary cornerback depth on this team is barren and could definitely use an addition. Even OL depth could use a new body if someone decent is let go from another team.

I think we see at least 1-2 waiver claims from Ballard after the initial cut downs.

Which position group do you see the biggest drop-off after the starters? ~ @MikeHopkins16

I’d have to go back and say the boundary cornerback position right now. The Colts have both Rock Ya-Sin and Xavier Rhodes at outside cornerback right now and I think that is a pretty solid duo. If one of them goes down though, who fills in on the outside? Kenny Moore II can fill in out there but then you are taking a star player out of his best spot. T.J. Carrie and rookie Isaiah Rodgers are the other corners projected to make the roster but both are better suited in the slot as well. Boundary cornerback depth right now is a big concern for me.

Outside of that, I think there is quite a bit drop off if any of the offensive line starters go down and if a linebacker were to go down (mainly because the three starters are all so good).

What is one personnel cut you’ve been most surprised by in covering the Colts? ~ @GreatHandshakes

This is a good one as we get at least one of these surprise cuts every offseason. I have only covered the team for the last two seasons (luckily avoiding the Grigson-Pagano era) but there have been quite a few in that short period of time. Daurice Fountain getting cut his rookie season certainly caught me off guard. Veteran John Simon and preseason standout Ryan Delaire come to mind as pretty shocking cuts as well. A player the team loved but moved on form last offseason too was Matthias Farley and that one more shocked me because it came so early into camp.

I would have to say the biggest surprise though was Deon Cain early into last season. I know they wanted to light a fire in him but they really liked him and I felt there was a better way to go about that situation. Oh well though.

Would you try to sneak Eason on the PS or would you carry third QBs and Swag Kelly on the PS. ~ @ivanburden

Final one we are going to answer here is one I get a lot on Twitter and just in general. The Colts are most likely not going to try and sneak Jacob Eason onto the practice squad this year. It is way way too risky. Reminder that if a rookie is cut, they have to pass through waivers where all 31 other teams have a chance to claim him. The Colts just took him in the fourth round so I doubt they take that chance and essentially risk losing a fourth round pick from this past draft. The likely scenario is that the Colts keep three quarterbacks this season.

As for Chad Kelly, he will either be the team’s practice squad quarterback this season or be looking for a new job. By all reports, he has looked up and down throughout practices and scrimmages but he is probably a suitable practice squad guy for the near future.