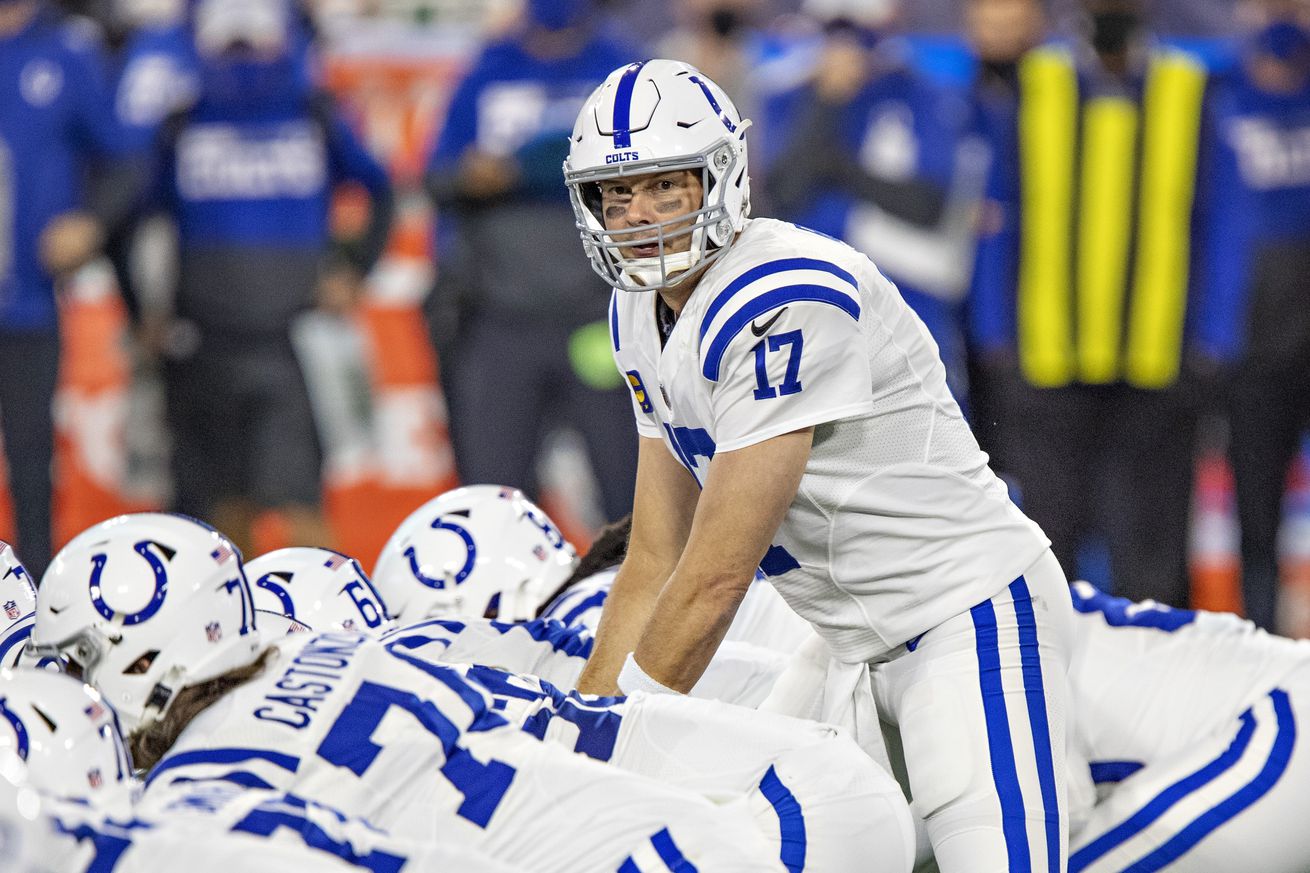 It feels long ago already but the Colts dismantled the Titans on Thursday Night Football, in Nashville, for first place honors in the AFC South. It was the team’s biggest win of the season and arguably the most well-rounded, getting big plays and contributions on both sides of the ball and special teams.

It was also another change up in terms of which players were targeted most on offense. We’ll say this for Frank Reich, if he’s had a hankering for being unpredictable, his usage of personnel (partially due to injuries) has gone a long way to accomplishing that goal.

Philip Rivers had one of his best games in a Colts uniform Thursday night. He threw for over 300 yards, including one touchdown and no interception, took only one sack, and finished with a QB ration of 105.5. As we noted earlier, one of his consistent traits in 2020 has been a willingness to involve all of his weapons. He targeted 10 different receivers, connecting with eight of them.

Even Jacoby Brissett got in on the action in Nashville, taking one snap in short-yardage on the goal line, which he used to score an easy touchdown.

There are a lot of complicated backfield situations in the NFL. Running back by committee has become the rule for much of the league with the bell cow backs dwindling in number for a variety of reasons. However, few backfields have been more challenging to nail down than the Colts from week to week. If anyone has ever followed how Bill Belichick utilizes his running backs in New England, it is about to that level in Indianapolis.

This isn’t necessarily bad, unless fantasy football is all you care about, but even without Marlon Mack the Colts have a dynamic group of rushers and the luxury to keep the player with the hot hand on the field each week.

Nyheim Hines had a big birthday against the Titans. He averaged 5.8 yards per carry on the ground, leading the way with 70 rushing yards and a rushing touchdown. He had twice the carries of either Taylor or Wilkins. He added 5 receptions for 45 yards and a receiving touchdown. If only he broke a punt return for a touchdown too? Side note: He’s one of only a handful of players in the league who could set that goal and have a shot of reaching it.

Indianapolis may be discovering an identity in the passing game. Michael Pittman Jr. has been active in the offense since returning from injury and put together his first 100-yard receiving game in the NFL. What the stat sheet won’t tell you is that he was sure-handed, ran crisp routes, and that he looked explosive after the catch. He even took an end around for 21 yards out of the backfield. If Pittman can get going, it can help open things up for other targets.

While DeMichael Harris only caught one pass for 21 yards, he continues to look like an excellent complement to the Colts offense. It’s hard not to salivate at the thought of Parris Campbell returning to the field healthy with Nyheim Hines and DeMichael Harris jointing Pittman as the big bodied option. If you’re looking for speed, the Colts have plenty of it.

Jack Doyle’s concussion forced Indianapolis to change things up at tight end. Mo Alie-Cox received the most snaps, and likely should continue to do so even after Doyle returns. He has been an incredible blocker for the run game and caught three passes on four targets, including key first down receptions. Trey Burton was quiet for much of the game but finished with three receptions on three targets for 24 yards.

The offensive line may have put together its most complete game of the season. Anytime your offense can put up 130+ yards on the ground and 300+ yards through the air, yielding only one sack, it’s a great day. It will be worth monitoring whether they can use the big day in Nashville to establish some momentum against a Packers defense that has been exploitable on the ground.

This defense has started to really smother opponents. One of the big reasons has been dominant play up front. DeForest Buckner has been incredible all season and has truly proven to be the x-factor the defense was looking for to make things come together for Matt Eberflus. Even when he’s not showing up on the stat sheet, he is creating opportunities for his teammates. He had five tackles and three quarterback hits.

Grover Stewart added five tackles of his own and one for a loss. When you’re getting 10 tackles out of interior defensive linemen, your defense can open things up.

Darius Leonard was truly a maniac on Thursday night. 15 total tackles was the highest in the NFL for a single game this season — it was matched on Sunday. There’s little doubt that Leonard was not satisfied with the performance given that he had no sacks or turnovers but Colts fans will take a 15 tackle performance when they get one. The pairing of Walker and Okereke rounds out what continues to be one of the best groups in the NFL this season.

This unit continues to be one of the biggest surprises of the 2020 season. Xavier Rhodes has re-established his role as a dominant cornerback. Kenny Moore continues to perform like one of the most dominant nickel corners in the league. T.J. Carrie has been incredibly efficient with his opportunities, including two pass breakups on Thursday filling in after Moore suffered an injury. When second-year corner Rock Ya-Sin might be your teams biggest weakness in the secondary, you’re going to have success on most Sundays.

Khari Willis and Julian Blackmon are already the best pairing at safety since Bob Sanders and Antoine Bethea. They haven’t quite established themselves to that level but they could be well on their way. Willis is a blue collar worker who doesn’t get nearly enough attention, as Bethea often played second-fiddle to Sanders. Blackmon is just a rookie and has found a way to regularly make impact plays this season. He has been strong in deep coverage and showed a willingness to come up to make plays on runs and short passes. It’s exciting to think how the pair could develop over the next couple of seasons.

For those who may not fully recognize what Willis has done this season, consider that with an incredible defensive line and a group of linebackers that is one of the best in the league, Willis is tied for second on the team with 53 combines tackles, one tackle ahead of Anthony Walker Jr., and has a sack, two tackles for a loss, an interception and two passes defended. He also has a special teams tackle.

In football, they call this “productive.” He’s been really good.

The special teams ace of the day, and arguably one of the MVPs, was E.J. Speed. His ability to penetrate and get pressure on two punts largely turned the tide in the game. His first pressure helped to lead to a shanked punt that led to excellent field position and a Colts touchdown. His second was a blocked punt that was recovered by T.J. Carrie and returned for a special teams touchdown.

Rookie kicker Rodrigo Blankenship was again perfect, including two field goals from 43 and 24 yards. His field goal to end the first half helped to give the Colts momentum. This was a prime time game, against a division opponent who was sitting along as first in the league, and at the end of a half. This is an example of kicking in a pressure situation and Blankenship got the job done. Hopefully he can build from it.