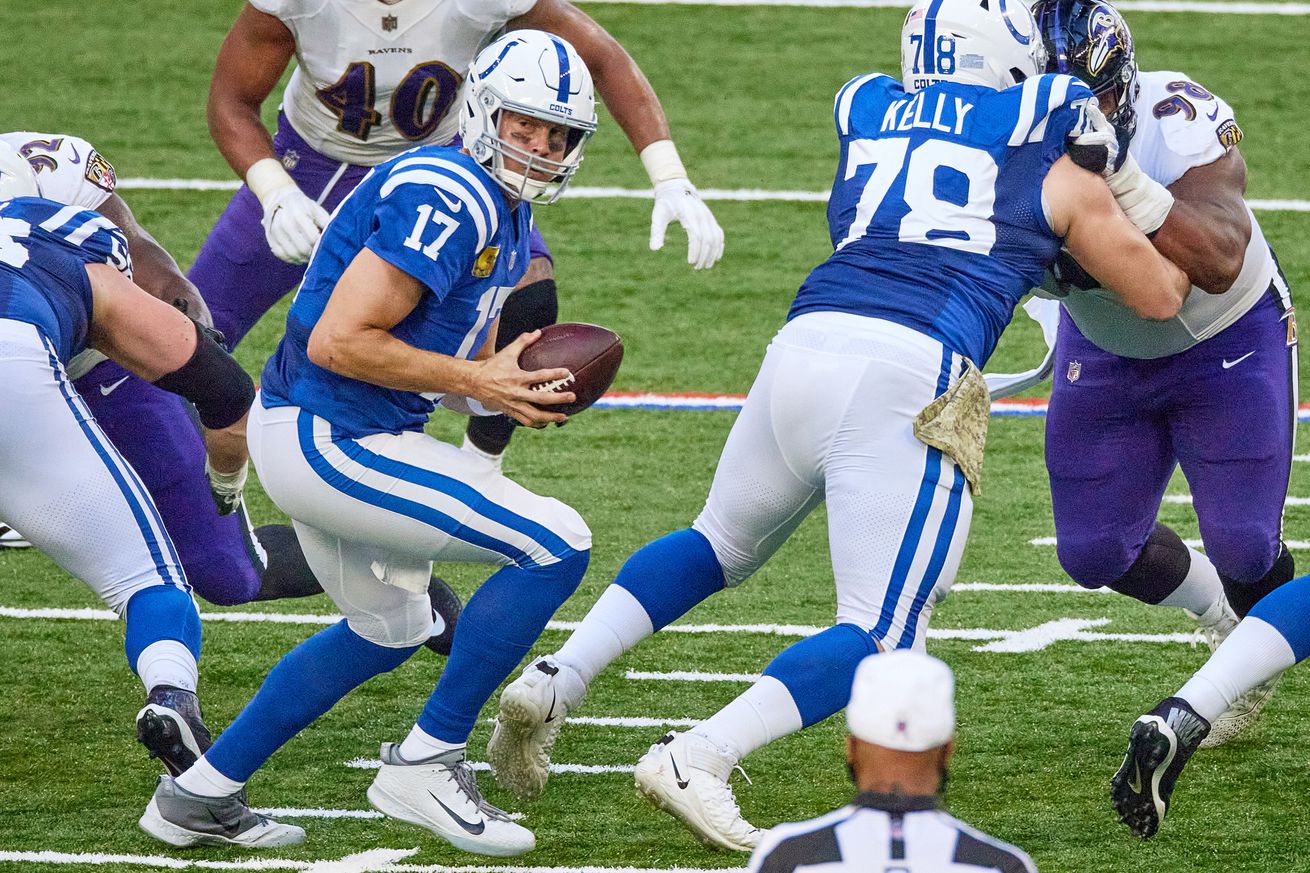 In the Indy’s biggest test of the season, the Colts were forced to bring all hands on deck. In a game that looked great in the first half and fell apart in the second, the coaching staff had a more active rotation than at any other time this year. It felt that everyone got involved in some way and that no matter who took the field it wasn’t enough to change the outcome.

After two games of promising performances against decidedly weaker competition, Philip Rivers came back down to earth against the Ravens at home. He finished the game with 227 passing yards with one controversial interception and no touchdowns. To close out the first half, he left the field for Jacoby Brissett to take his first snap in weeks, which went about as well as his last snap — which is to say it didn’t go well at all.

Frank Reich gave rookie Jonathan Taylor the starting nod over Jordan Wilkins, who was coming off of an excellent performance in Detroit. Taylor rewarded the decision early, moving the ball well and punching it in on the goal line to kick off scoring in the contest. Sadly, he fumbled the ball shortly after his touchdown and would find himself on the sidelines for much of the rest of the game. Interestingly, the Colts averaged over 5 yards per carry, including big runs from DeMichael Harris, but three and outs in the second half and long Ravens scoring drives changed the script.

With T.Y. Hilton out of the game, the Colts had to activate all warm bodies. Marcus Johnson, Michael Pittman Jr. and Zach Pascal were the primary receivers. DeMichael Harris again looked like a dangerous weapon who was used on occasion in the running and passing game. The best news of the day out of the receivers is that Pittman appeared to get things going early. It is the most active he has been in the offensive game plan and he looked comfortable answering the call. The worst news is that even with Marlon Humphrey out, the receivers weren’t good enough as a unit to take advantage.

One of the lesser discussed controversial calls on Sunday included a no-call for helmet-to-helmet contact on a defenseless receiver. Somehow Charles Davis decried that the contact he just watched on replay was “should-to-shoulder” even though it was pretty obvious that Jack Doyle just got smoked in his jaw with a defender’s helmet. Miraculously, despite no contact to his head, Doyle suffered a concussion on the play that took him out for the remainder of the game.

While Doyle may not be having his most productive season as a pass catcher, he plays an important role as a run and pass blocker and not having him certainly hurt in the second half. Still, the only tight end who appeared to be a weapon in this one was Mo Alie-Cox, who continues to deliver when he’s involved in the offense.

Another week and another ho-hum offensive line report. The unit is good and continues to enjoy rare continuity. While the run blocking has fallen off in 2020, the pass blocking is as good as it has ever been. It’d be nice if Rivers and Reich could figure out a way to do something with it.

In the first half, the Colts defensive line had its way with the Baltimore front. Lamar Jackson was regularly contained to the pocket, numerous players were getting penetration, and the Ravens couldn’t do anything on the ground. In this respect, the game was going exactly as the Colts would want it to go and it forced Jackson and his offense to change their stripes.

In the second half, everything changed. The defensive line started to get blown off of the ball and give up four-five yards per carry to Ravens running backs on early downs. The unit stopped getting the same kind of penetration or causing disruption. A half time adjustment for Jackson to get rid of the ball faster in the second half, along with off- and zone-heavy coverage made it easy for Baltimore to find a rhythm and move the ball.

The biggest takeaways for the linebackers this week is that Darius Leonard is truly a Maniac. He tallied 15 combined tackles, including one for a loss and a fumble recovery. Bobby Okereke tied for second with nine total tackles, including his own tackle for a loss and a fumble recovery. Anthony Walker Jr. had a bounce-back game with six total tackles and a pass defensed. This unit has been really good all year and is one of the best groups in the NFL.

Side note, Mark Andrews is a really good NFL tight end and a receiving threat. He caught three passes on five targets for only 22 yards. The linebackers played a big role in keeping him from having a bigger impact on the game.

The good news for the corners is that they were not responsible for allowing big plays. They kept Hollywood Brown in check. The bad news is that they allowed Jackson to be ridiculously efficient. He completed 19/23 passes for 170 yards and rushed for 58 yards — much of that was in the second half. There are too many free completions given up by this defense each week. It may be a part of what has otherwise been a very strong defensive philosophy but it bailed out Jackson and his offensive line.

The Colts feel entirely comfortable with their safety group. Blackmon and Willis are young and productive. Willis tied for second on the team with nine total tackles. Blackmon added three, including a tackle for loss. George Odum’s primary contribution is getting posterized by a Mark Andrews block deep into the end zone while Lamar Jackson escaped free for an easy touchdown on the goal line.

While special teams didn’t play a particularly big role in the outcome of the game on Sunday, it’s fair to note that Rigoberto Sanchez had a bad day — at least by his standards. He’s made a name for himself as a directional kicker and by pinning opponents deep in their own territory. He’s also made a name for a long streak of no touchbacks. He had two touchbacks against the Ravens and those were missed opportunities to setup the defense.

The other takeaway is that while Isaiah Rodgers hasn’t broken another touchdown return yet this season, he frequently looks really close to doing so. A couple of his returns weren’t particularly exciting but one may have been a block away from another touchdown. Given what we learned about the Colts facing strong opponents, Rodgers having success in the return game could be key to Indy’s chances of winning tough games.