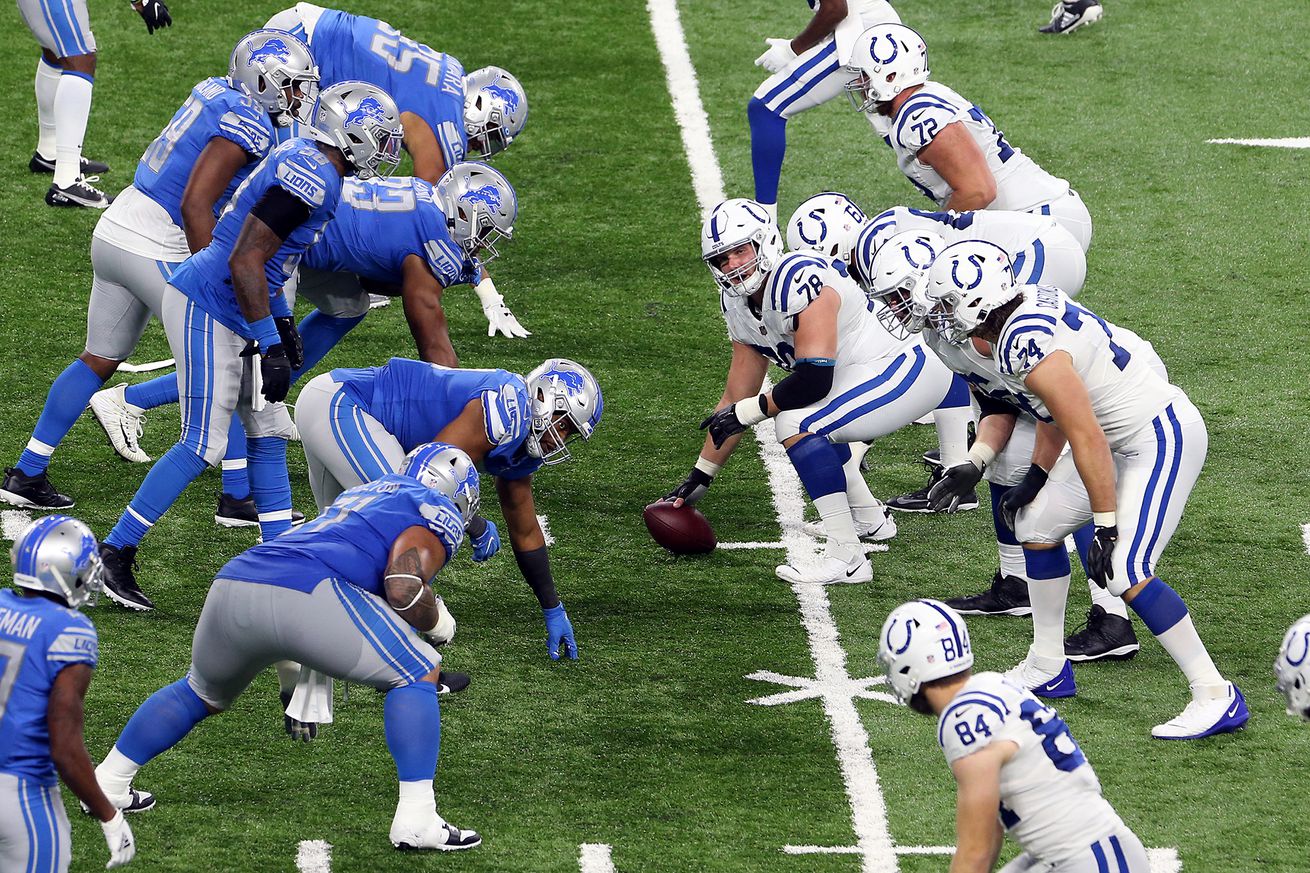 Coming out of their bye week, the Colts were as healthy as they have been all season. Numerous players returned to give the coaching staff nearly every option on both sides of the ball. Let’s take a look at how a healthy roster impacted snap counts.

After what was a bit of a slow start to the 2020 season, Philip Rivers has really started to come on. He has put together two productive games and seems to be hitting a stride with his receivers. All players require some time to get acclimated to a new system and while there was an expectation that Rivers would acclimate quickly given his familiarity with Frank Reich’s scheme in San Diego, an abbreviated and atypical offseason certainly played a role in some early season growing pains.

What is arguably most impressive about Rivers’ performance is that he’s been playing without a true number one threat or target. This seemingly hasn’t phased him at all and after he was taken down hard after a whistle on Sunday, it seemed like he went to the sideline and emphatically asked that they send him “everyone” to bury the Lions.

There were 11 offensive skill position players to take a snap in Detroit. Each of them had at least one catch.

In what has been a bit of a roller coaster start of the season for the Colts backfield, Jordan Wilkins took advantage of an opportunity to shine. In-game commentary indicated that perhaps Jonathan Taylor suffered a minor injury that led the coaching staff to hold him out for much of the second half but on-field production for Wilkins would have been reason enough.

If Wilkins can split carries with Taylor they should be able to stay fresh through the second half of the season. Giving Nyheim Hines reps as a change of pace and third down back gives defenses another look and fits right in with Rivers’ well-established experience with speedy receiving backs.

Don’t give up on Taylor yet but having Wilkins available gives the Colts a true committee. Imagine this group with Mack healthy.

While it’s hard to get a good feel for what the Colts have at the wide receiver position, one thing is apparent. Even without a fully healthy or highly productive T.Y. Hilton this group finds a way to get the job done. Both Zach Pascal and Marcus Johnson have flashed playmaking ability and been on the receiving end of big passes from Rivers this season.

Michael Pittman Jr. was heavily involved in his first game back from injury. If he can use the next few weeks to take a more prominent role in the passing offense it would be a boost. Without Hilton and Parris Campbell, the team will be missing much of the speed they hoped to carry into games this season. Perhaps undrafted rookie DeMichael Harris, who flashed against the Bengals, will get more opportunities, especially if special teams ace Ashton Dulin has to miss any time after he suffered an injury on Sunday.

With the return of Mo Alie-Cox to the active lineup the Colts were at full strength at the tight end position. Jack Doyle continues to get the most work but the split between the team’s primary tight ends is relatively even. There is no doubt that each of these players brings something a little different to the field.

Burton’s athleticism has been on display since he took the field and clearly Frank Reich hasn’t forgotten his role in a wild cat offense when the Eagles won a Super Bowl. It has been awhile since the Colts have had players to run gadget plays but Reich isn’t afraid to use his weapons in a variety of ways.

Little can be said about this offensive line that hasn’t been said already. This unit, when healthy, remains one of the best in the NFL. Rivers has been given mostly clean pockets to work with and has used the time to hit his targets all over the field. It is still somewhat mysterious that the offensive line hasn’t figured things out on the ground but if Wilkins’ performance is any indication, they could be picking up steam.

The Colts defensive line is ridiculously stout. Chris Ballard noted that he wanted to build a defensive line that he could throw at opponents in waves. Well Chris, I think you’ve finally done it.

Along the interior, DeForest Buckner is joined by Grover Stewart, Sheldon Day and Taylor Stallworth. This group has size and is ridiculously skilled against the run. To make matters worse for opponents, they are so strong that they can create pressure on the quarterback by simply collapsing the pocket.

On the outside, Justin Houston continues to be a tough assignment for opponents but Tyquan Lewis has really taken advantage of his limited but growing opportunities to produce. He finished the game with three tackles, including two sacks and a pass defensed on just 25 snaps. Against the Bengals in Week 6, Lewis had five tackles and half a sack in 21 defensive snaps. Rotating Lewis and Autry on the outside is a rather strong combination.

Add in Kemoko Turay in the next week or two and this line could take another step.

The good news for the Colts is that their linebackers are also extremely good. Darius Leonard put his stamp on the game with a strip sack that led to a fumble recovery and blew any of Detroit’s hopes to mount a comeback. He led the team with nine tackles, the sack and forced fumble. Bobby Okereke finished second on the team with seven tackles, including two for a loss and a hurry.

The biggest disappointment on defense Sunday was Anthony Walker. He saw saw nearly half of the snaps as Okereke but he showed up too much getting beat in the passing game on those snaps. He will need to continue developing or figure out a way to improve against the pass or the Colts will likely lean on the more athletic Okereke even more down the stretch.

Perhaps the most encouraging thing about the Colts corners is that they didn’t really stand out on Sunday. A quiet day for a cornerback is a good thing at any level but especially in the NFL. Kenny Moore did get beat in the first quarter by Marvin Jones for a touchdown. Xavier Rhodes was really close to knocking down another touchdown toss to Jones.

Otherwise, the corners continued to limit big plays and play disruptive football. The secondary had three passes defensed and a pick-six to help wipe away one of the Jones touchdowns.

Khari Willis is in his second season. Julian Blackmon is a rookie. They’re both too good to take off of the field. That’s a good problem to have.

It’s fair to point out that Stafford did complete a 70-yard pass that saw Marvin Hall get behind the defense but Stafford also had way too long to get a pass away.

It wasn’t a great day for the Colts special teams units. Poor effort and execution resulted in a blocked punt early that led to Detroit’s first touchdown. This play also resulted in what appears to be at least a minor injury to punter Rigoberto Sanchez, who is arguably one of the most underappreciated weapons on the team. The punting unit followed this up by holding on another punt, giving the Lions extra yards.

Rodrigo Blankenship has been solid for weeks but managed to miss two extra points on Sunday. It all worked out in Detroit but things are going to be a lot closer and points will be at a premium over the next few weeks.

Even the kick return unit wasn’t as strong as it has been at times this season. Sanchez has frequently kicked short on purpose to force a return and give his coverage unit a chance to pin opponents deep in their own territory. In both of the returns Sunday Detroit was able to get out past the 25-yard line and threated to break a big return on one.