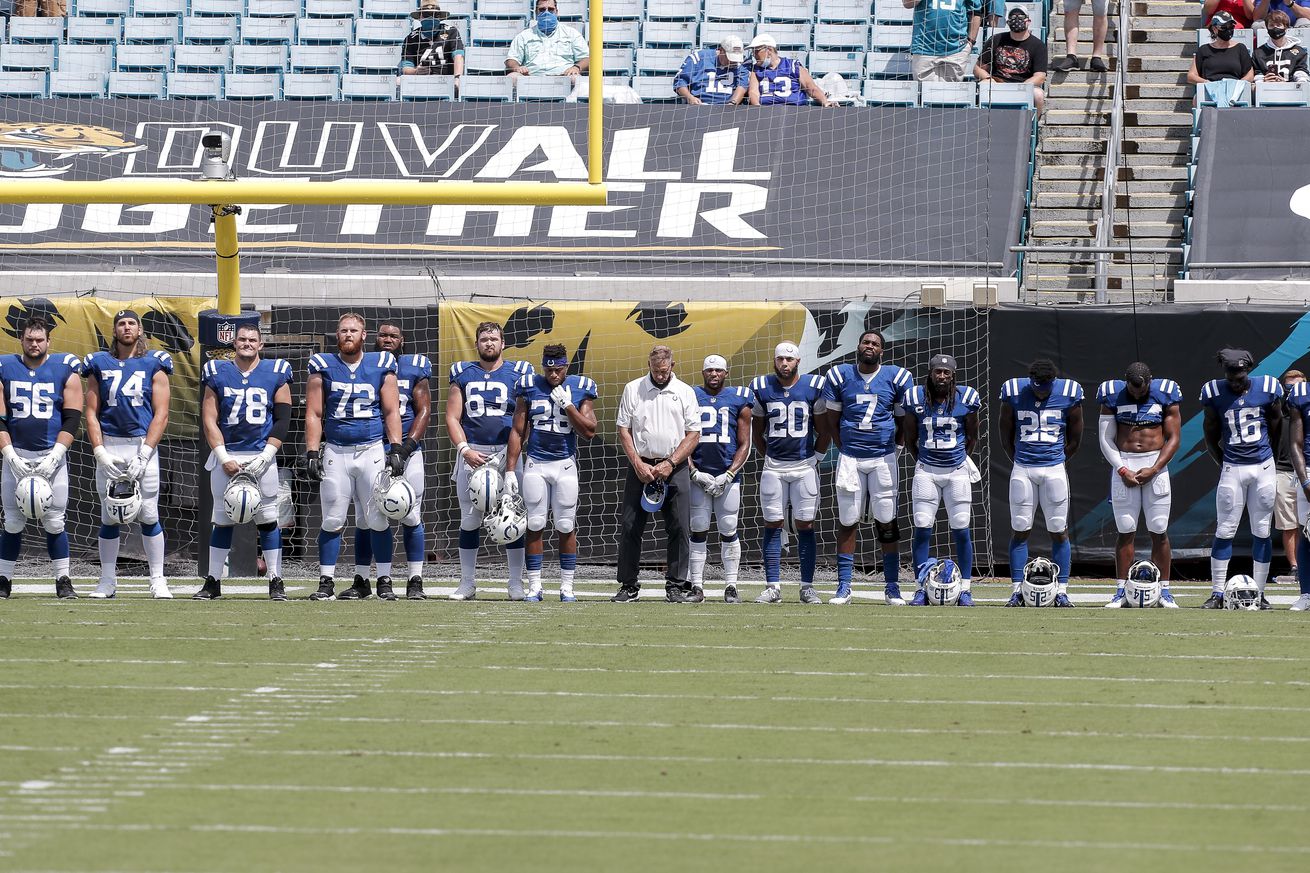 The Indianapolis Colts took a conservative approach to roster utilization to start the 2020 NFL season after an abbreviated offseason. Proven NFL veterans saw the heaviest share of the load while those who had less experience or not a part of the base units were often sitting on the sideline.

Given the state of the offseason, this isn’t a particularly surprising approach. With the outcome of the game as a backdrop, the decision creates some questions about the team’s confidence in its new players.

It comes as no surprise that the starting offensive line played every snap together.

What was potentially interesting about the offensive line is that the coaching staff chose to bring in Danny Pinter as a sixth lineman on a few occasions, as opposed to adding a tackle like Le’Raven Clark. Pinter is a rookie who was getting some attention in training camp and who clearly has earned the early confidence of the coaching staff.

There were a few surprises on the offensive side of the football. Arguably, the first is that Philip Rivers came out of the game for a goal line play that featured Jacoby Brissett. The play failed miserably but there was no way to be sure whether the Colts has any plans to actually follow through with their indication that keeping Brissett involved was a possibility.

The backfield load was surprising for a variety of reasons. The first is that while Nyheim Hines is a terrific third down back and can be lined up all over the field, he wasn’t expected to be a primary carrier in the base offense or on early downs. Hines was leaned upon heavily throughout the game, even after Marlon Mack went down to injury, and even in short-yardage, inside run situations.

Given the preseason hype surrounding how large, powerful, and fast Jonathan Taylor has been in camp, it’s shocking to see Taylor get so little attention on offense — especially when you consider that he likely would have had even fewer opportunities if Mack stayed on the field. Also, it’s hard to understand why Taylor wouldn’t have been used in short-yardage.

The biggest surprise from the receiving unit is that T.Y. Hilton saw fewer snaps than Parris Campbell. It’s also fair that Campbell’s big day and hot hand kept him on the field and it is surprising to see Hilton drop a couple of passes that helped stall important offensive drives late in the game.

The least surprising offensive unit on the team was the tight end position. Jack Doyle saw the field for the vast majority of the opportunities and Mo Alie-Cox worked his way onto the field less frequently. With Trey Burton out and a lack of experience behind these two, Reich and the offense kept things simple.

One of the biggest disappointments for the Colts defense on Sunday was a lack of pop from the defensive line. The unit did manage a couple of sacks but pressure wasn’t particularly prevalent and a position that was considered a strength and arguably the deepest on the team didn’t look like it.

While Autry is a proven NFL veteran and comfortable playing outside, there appeared to be an expectation that he would play primarily in the base defense. For Ben Banogu to see the field for only 7 snaps at end and Tyquan Lewis to see 12 on the inside is a bit surprising.

One could argue that the split at linebacker was also a bit surprising. It wasn’t surprising to see Darius Leonard on the field for every snap but the split between Anthony Walker and Bobby Okereke was far more one-sided that might have been anticipated coming into the game.

While the cornerback workload was as expected, the performance was not inspiring. Xavier Rhodes had plenty of struggles, the same kind that led to his release by Minnesota. Rock Ya-Sin didn’t lock down his assignments in the way some thought he might in his second season. The biggest bright spot at corner was Kenny Moore, which is to be expected at this point.

Another position that carried a lot of hype coming into the game was safety. Julian Blackmon was inactive for the game, which was expected, but George Odum and Tavon Wilson have received plenty of attention in the offseason and neither took the field on defense.

In a strange game where the Colts never punted but managed to lose, there weren’t many special teams snaps to go around. However, those who were relied upon most fit well within expectations. Rookie Jordan Glasgow joined Zaire Franklin and George Odum as primary special teams contributors while Matthews Adams and Ashton Dulin continue to keep their spot on the roster for their contributions in this areas as well.