The Colts were not able to replace the recently retired Anthony Castonzo in free agency, which is why their projected starting left tackle were the season to start today would be Julie’n Davenport, who had just 30 snaps with the Dolphins in 2020… probably because he gave up 15 sacks and 76 total pressures for Miami and Houston in 2018 and 2019 combined. Vera-Tucker, on the other hand, had just one collegiate season (2020) at left tackle after two at guard, but he held up very well, allowing eight total pressures (four sacks) in 305 pass-blocking snaps. His “nightmare game” against Oregon pass-rusher Kayvon Thibodeaux, a sure-fire top pick sooner than later, still showed Vera-Tucker holding his own more often than not. Vera-Tucker is a project to a point at left tackle, but he’s a worthy one.

Other prospects that were still on the board include EDGEs Kwity Paye and Jayson Oweh along with offensive tackles Samuel Cosmi and Teven Jenkins.

Vera-Tucker is an interesting case for the Colts. He only has one season under his belt as a left tackle, but he shined in that role. He’s an elite athlete and one of the best in the draft among offensive linemen with a 9.03 RAS. 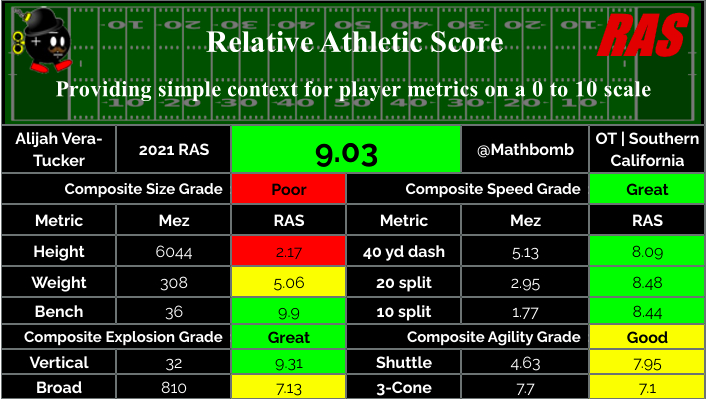 Given his experience as a guard and his arm length (32 1/8 inches), some are projecting Vera-Tucker as an interior offensive lineman. Farrar has the Colts keeping him as a tackle here while The Athletic’s Dane Brugler has Vera-Tucker rated as the top guard in the class.

It would be certainly an interesting and even fiery discourse if the Colts were to take a tackle over an edge rusher like Paye, who seems to be a very strong fit at the biggest position of need, but Vera-Tucker gives Indy a Pro Bowl ceiling at left tackle immediately after the retirement of Anthony Castonzo.

Colts still in the mix for DE Justin Houston