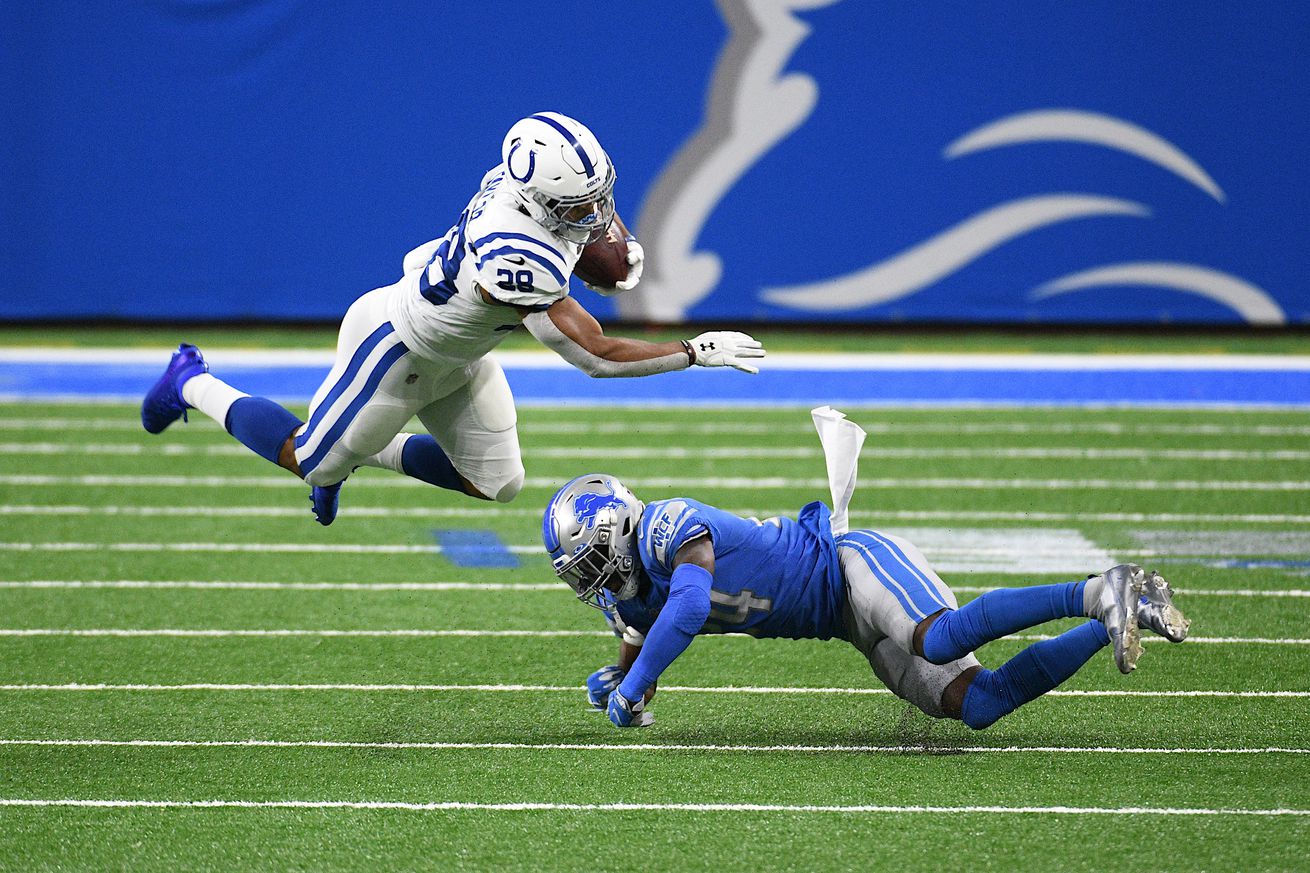 The Indianapolis Colts have been regularly receiving important contributions from rookies in the 2020 NFL season. On Sunday, things were a bit different. As the roster continues to get healthy and with Frank Reich and Philip Rivers intent on getting so many players involved, snaps and targets are growing hard to come by.

Jonathan Taylor has been the Colts’ lead running back since Marlon Mack suffered an injury Week 1. On Sunday he had a day he would like to forget statistically, carrying the ball 11 times for 22 yards and catching two passes on three targets for another nine yards. He took a backseat to Jordan Wilkins and Nyheim Hines, who had more prominent roles in the offense and enjoyed far superior production, including three of Indy’s five offensive touchdowns.

In a post-game interview Philip Rivers mentioned that Taylor was nicked up, and that may be some explanation but something has been a little off to start the rookie’s career. There have been documented issues with his vision and creativity, missing big running lanes. There have also been concerns about the inability to break tackles, something his size and power suggested would be a strength.

It’s possible that Wilkins put together a performance strong enough to demand a more even split of the carries down the stretch, which would limit rookie impact even more.

The only other offensive rookie to make an impact was Michael Pittman Jr. who caught his only target for six yards. Pittman did get a healthy percentage of snaps in his first game back from injury but has yet to work his way into the offensive game plan. His primary role at this point is willing run blocker, a skill Zach Pascal displays on the opposite side of the field on most plays.

Rookie safety Julian Blackmon was the only defensive rookie to play. He took each of the Colts 61 defensive snaps. Blackmon finished the day with four tackles and wasn’t quite as disruptive in Detroit as he has been in previous games. The biggest way he stood out was when he allowed a Lions receiver to get behind him for a desperation 70-yard pass on third-and-long.

The blown assignment shouldn’t define his day but his otherwise atypically quiet statistical production makes it stand out more.

The special teams unit had its worst day of the season. While a rookie was not involved in the punt that was blocked in the first quarter, the only meaningful production out of rookies on special teams was either unspectacular or detrimental.

Rookie special teams ace Jordan Glasgow did not make a special teams tackle of big contribution, as he has frequently this season. Isaiah Rodgers took three kickoff returns for 74 yards, a 24.7 yard per return average that is low relative to his previous work.

Rookie place kicker Rodrigo Blankenship has been on a good streak for a few weeks but missed two extra points. One of those may be due to a bad snap but the other was just an inexcusable miss. This isn’t the first time Blankenship showed signs of getting rattled and given that this occurred in a game against the Lions and not in crunch time against a playoff-caliber opponent, it creates some concern.

Hopefully he can get it figured out because mistakes like that will haunt the Colts against quality opponents.