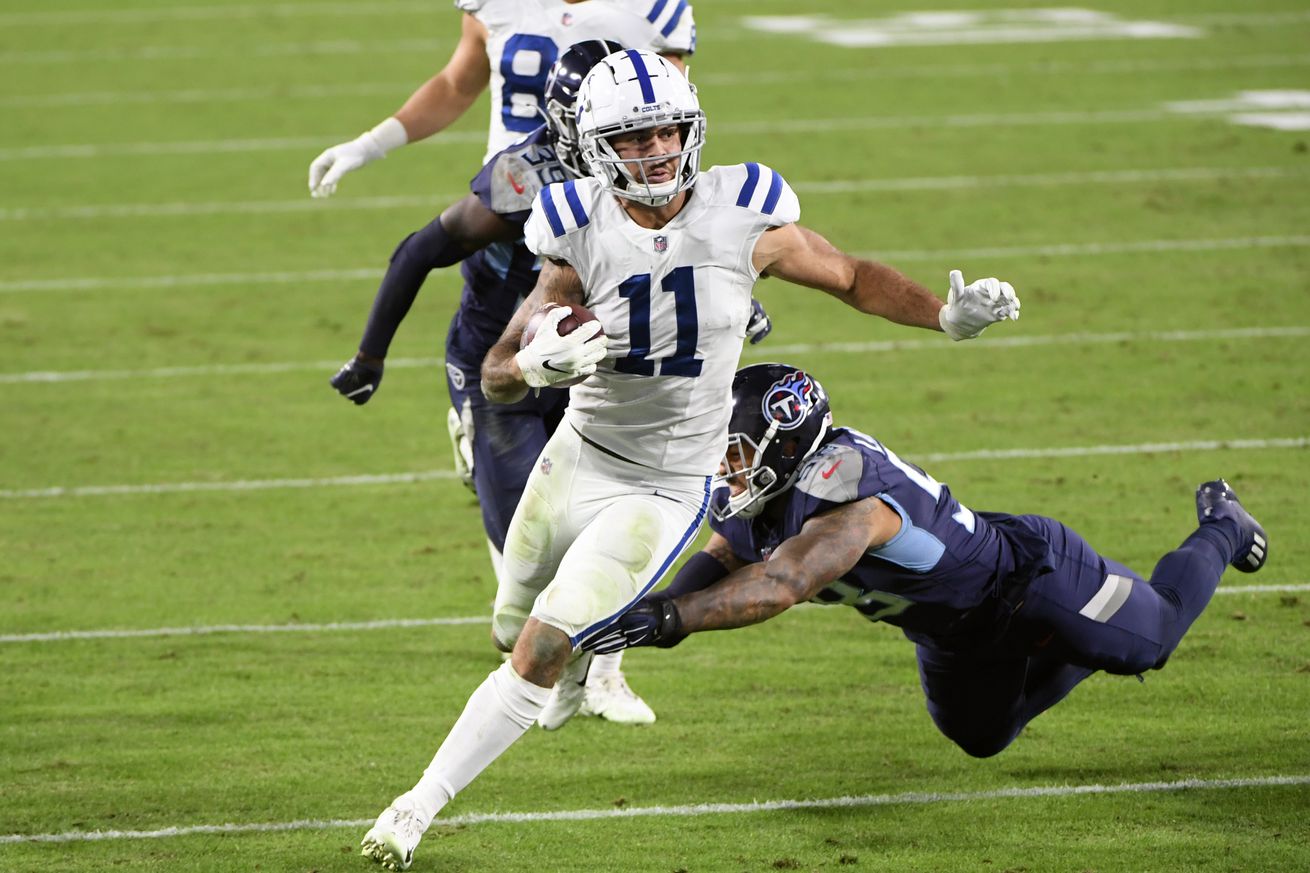 Since Marlon Mack’s season-ending injury in Week 1, running back Jonathan Taylor has been the most heavily utilized offensive rookie in Indianapolis. Well, that is until Week 9’s matchup with the Ravens. Since that time, Taylor has received single-digit carries and fellow second round rookie receiver Michael Pittman Jr. has taken on a bigger role.

Taylor finished Thursday’s game with seven carries for 12 yards, a 1.7 yards per carry average. He added two catches for 25 yards but took only 17 snaps, which is three more than Jordan Wilkins and 22 fewer than Nyheim Hines. The Colts have a friendly matchup against a Packers rush defense that has been gashed frequently this season but it’s hard to have any confidence in which of the Colts three-headed backfield is likely to get the most opportunities.

Pittman Jr. has burst onto the scene following his return from a calf injury to lead the team in receiving targets, catches, and yards. On Thursday, he became just the second Colts receiver in 2020 to amass 100 yards receiving — finishing with 101 yards. He also took an end around for 21 yards out of the backfield.

Philip Rivers has been regularly looking Pittman Jr.’s way and there is no reason to expect that will change as the season progresses. If he can find a way to get into the end zone and continue to be this productive, he could establish himself as the team’s new number one receiver. Indianapolis desperately needs someone to step into the role.

Undrafted rookie receiver DeMichael Harris didn’t see a lot of work in Nashville but he did make a 21 yard reception on his only target for an important first down with the Colts in a two-minute offense trying to get points on the board before the half. His catch moved Indianapolis into Titans territory and opened things up for Reich and Rivers to get into field goal range.

While he may not have received a lot of looks, and while Pittman Jr.’s ascension in the passing game could limit his opportunities, Harris has still carved out a role and has shown to be an explosive athlete who delivers when called upon.

Undrafted rookie tight end Noah Togiai received some work with Jack Doyle out with a concussion. While he didn’t receive any targets in the passing game, his 16 snaps at least saw him get onto the field.

Rookie safety Julian Blackmon continues to be the primary defensive contributor out of this draft class. He finished the game with four total tackles, including an explosive tackle for loss on a Derrick Henry carry. He finished third on the team in defense snaps with 60, which amounts for 92% of the opportunities.

To this point, the expectation is that Blackmon will flash a big play each week. While he hasn’t been as active with takeaways, his speed and range have been on display and have saved the Colts defense frequently.

Cornerback Isaiah Rodgers doesn’t get a lot of time on defense, given that the Colts are comfortable with the four players in front of him. He did make a tackle on defense and another on special teams on Thursday. With that said, he only took four defensive snaps.

Kicker Rodrigo Blankenship was perfect again in Nashville. He hit both field goal attempts and all four extra points. Importantly, he hit an attempt to end the first half that allowed the Colts to take some momentum into the locker room. What was supposed to be a 38-yard try became a more difficult 43-yard try when Chaz Green was penalized for a false start. In effect, Blankenship was not only iced by his own team, he also was given a more challenging kick as a reward. This is about as clutch or high-pressure as Blankenship has faced in his young career and it was encouraging to see him pull through.