The Colts have reason for optimism on the health front with respect to safety Julian Blackmon. Head coach Frank Reich recently said that it’s “not a stretch” he could be back to a full workload by training camp (Twitter link via Mike Chappell of CBS4). 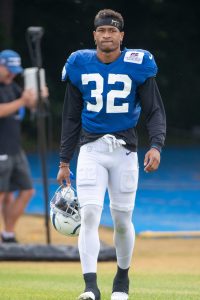 The 23-year-old tore his Achilles in October, ending his second season in the league. Blackmon almost immediately established himself as a starter in his rookie campaign, notching a pair of interceptions and six pass deflections. The injury limited him to only six contests in 2021, though.

The former third round pick would be a welcomed sight for Indianapolis if he were indeed able to return to full strength by July. However, as Chappell notes, the team “won’t push him too hard too soon” as he continues to recover. Upon his return, Blackmon would likely have a clear path to his starting role.

The Colts have re-made much of their secondary, headlined by the signing of All-Pro corner Stephon Gilmore. At the safety spot, the team brought in Armani Watts, and, days later, Rodney McLeod. Indianapolis added further depth via the draft, including third-rounder Nick Cross. Amidst the many changes, veteran Andrew Sendejo has not been re-signed.

Entering a season with higher expectations for the team, Blackmon will have a significant role to play, assuming he is healthy by the fall at the latest. If not, the Colts will have a number of other options to turn to on the backend.