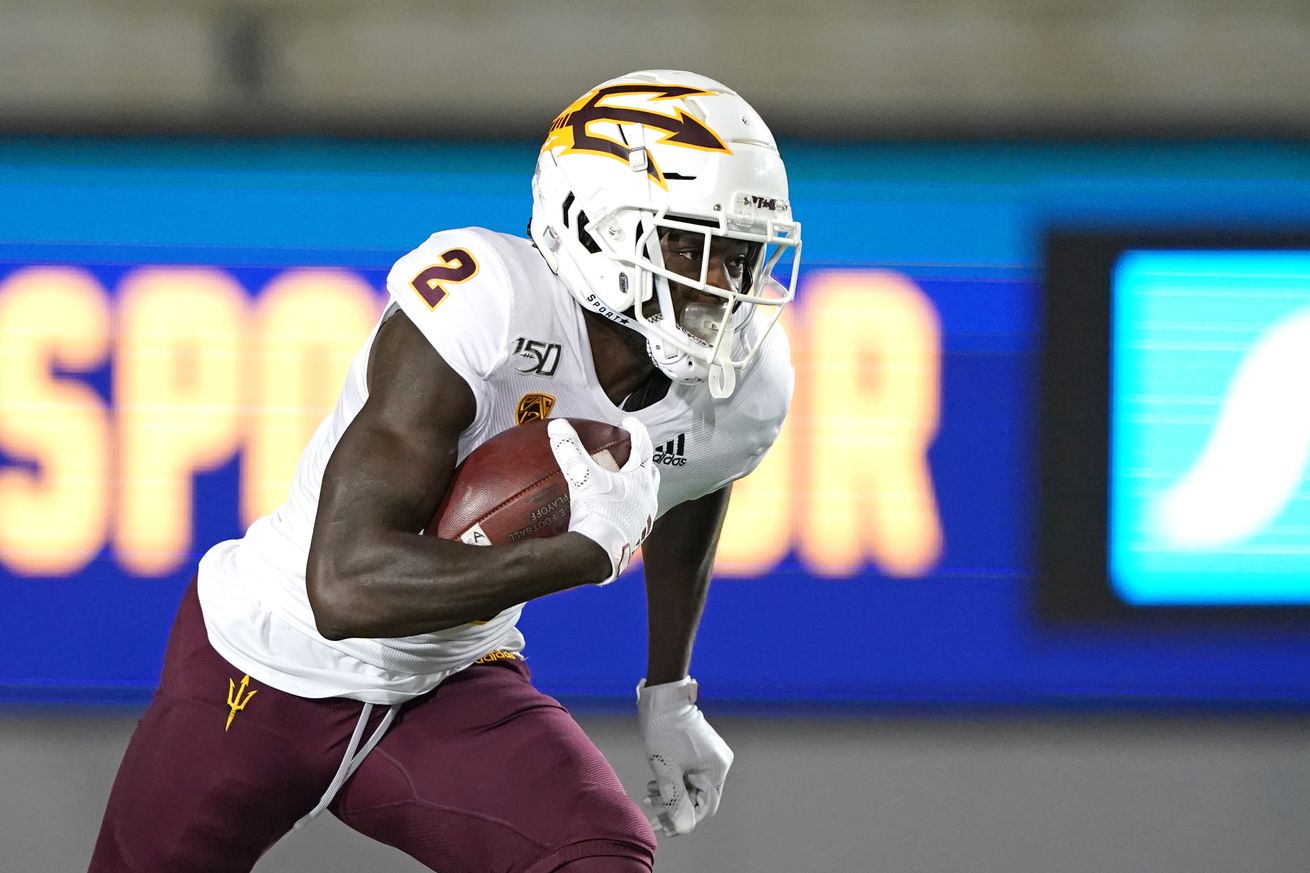 The former Sun Devils’ standout also has the versatility to shine as a special teams returnman, as he returned both punts and kickoffs through 2018-19—which included a punt return for a touchdown last season.

Aiyuk posted a 4.50 forty time, 40.0 inch vertical, and 128.0 inch broad jump at the NFL Combine. His SPARQ rating (which measures overall athleticism) is in the 89.4% NFL percentile—good for 6th best in his wide receiver draft class.

For what it’s worth, he reportedly did recently undergo core muscle surgery.

Given his special teams’ return prowess, it should come as no surprise that Aiyuk is incredibly explosive as a wide receiver and with the football in his hands after the catch.

That being said, Aiyuk’s route-running could use some refinement, as he needs to become more nuanced as a route-runner and show greater fluidity in-and-out of breaks.

While Aiyuk isn’t the ‘big bodied wideout’ that many Colts fans are coveting, he’s a fantastic athlete, who’s a big play weapon—both in the screen game and vertically down the field.

In a blink of an eye, he can take any play ‘to the house’.

Given the draft board, Aiyuk would be a solid choice at #34 for the Colts at wideout—although there are some other intriguing names like Higgins, Claypool, and Pittman Jr. too:

I love ASU WR Brandon Aiyuk. In a normal year, he would be a top 3 WR in the draft. I think he’ll be a steal late one/early 2. His run after catch ability is outstanding. https://t.co/7fcDhkGJ7D

ASU WR Brandon Aiyuk is a stud. He’s strong, explosive and very competitive. He’s going to be a great pro.

Brandon Aiyuk is growing on me second time through his tape. He’s not the most developed route runner, but I don’t think he loses a smidge of speed when he breaks off a route. It’s pretty wild. I thought the video jumped a few times, that’s how fast he hit breaks

Brandon Aiyuk is one of draft’s fastest risers because of how electrifying he is with ball in his hands.

Dominated on kickoff & punt returns at Arizona State & in 2019 gained more yards after contact than any WR eligible for this year’s draft.

#ArizonaState WR Brandon Aiyuk is one of the most underrated NFL prospects in this class.

Poor pursuit angle by the safety, but Aiyuk’s route speed forced the miss and did the rest. pic.twitter.com/smMjMdEm2w

• Like a RB after the catch
• Big play waiting to happen (+)
• Turns 5-yard catches into 50-yarders
• Strong through contact
• Play patiencepic.twitter.com/m6cwpPlrFC

Meanwhile, the 6’2”, 304 pound Gallimore recorded 30 tackles, 7.5 tackles for loss, 4.0 sacks, and 2 forced fumbles in 14 starts during his senior season for the Oklahoma Sooners—earning 2nd-Team All-Big 12 honors.

He ran a freak 4.79 forty time at the NFL Combine to go along with 23 bench press reps.

Gallimore shows excellent explosion off the snap and always plays with a high motor—and has the type of athletic upside to groom into a potential interior force at defensive tackle.

Gallimore can hold his own against the run and looks like he has the scheme versatility to play as either a three or one-technique defensive tackle for the Colts—although he looks like more of a natural three-technique all things considered.

He’s the type of solid, all-around defensive tackle that can consistently penetrate and be very disruptive in an opponent’s backfield.

On the other hand, Gallimore needs to get stronger at the point of attack at times—namely with his leverage and balance. He also could use some improvement with his overall hand technique, which can be inconsistent—but is definitely coachable at the next level.

With the Colts having traded for All-Pro DeForest Buckner and signed backup Sheldon Day at defensive tackle, Gallimore may be more of a “luxury pick” here.

Denico Autry turns 30 years old in July (and is a free agent at season’s end), and it’s not as though the Colts can’t always use another impact interior rotational piece—as general manager Chris Ballard has preached strengthening his team in the trenches since his arrival in 2017.

That being said, I think it’s fair to look at the draft board and wonder whether Alabama cornerback Trevon Diggs (#47) or LSU offensive guard Damien Lewis (#50) would make more sense for the Colts bigger picture—given their already improved depth at defensive tackle this offseason.

Here’s what others are saying on Gallimore:

Neville Gallimore, IDL, Oklahoma: HOT motor, works to the edge of blockers quickly and hands are active. He can be erratic and get himself stuck if his first move doesn’t land. Needs to be more consistent, but he should test great and has the traits you want.

Neville Gallimore was an anchor in the middle of the Oklahoma defensive line last season. pic.twitter.com/segwPeSdRA