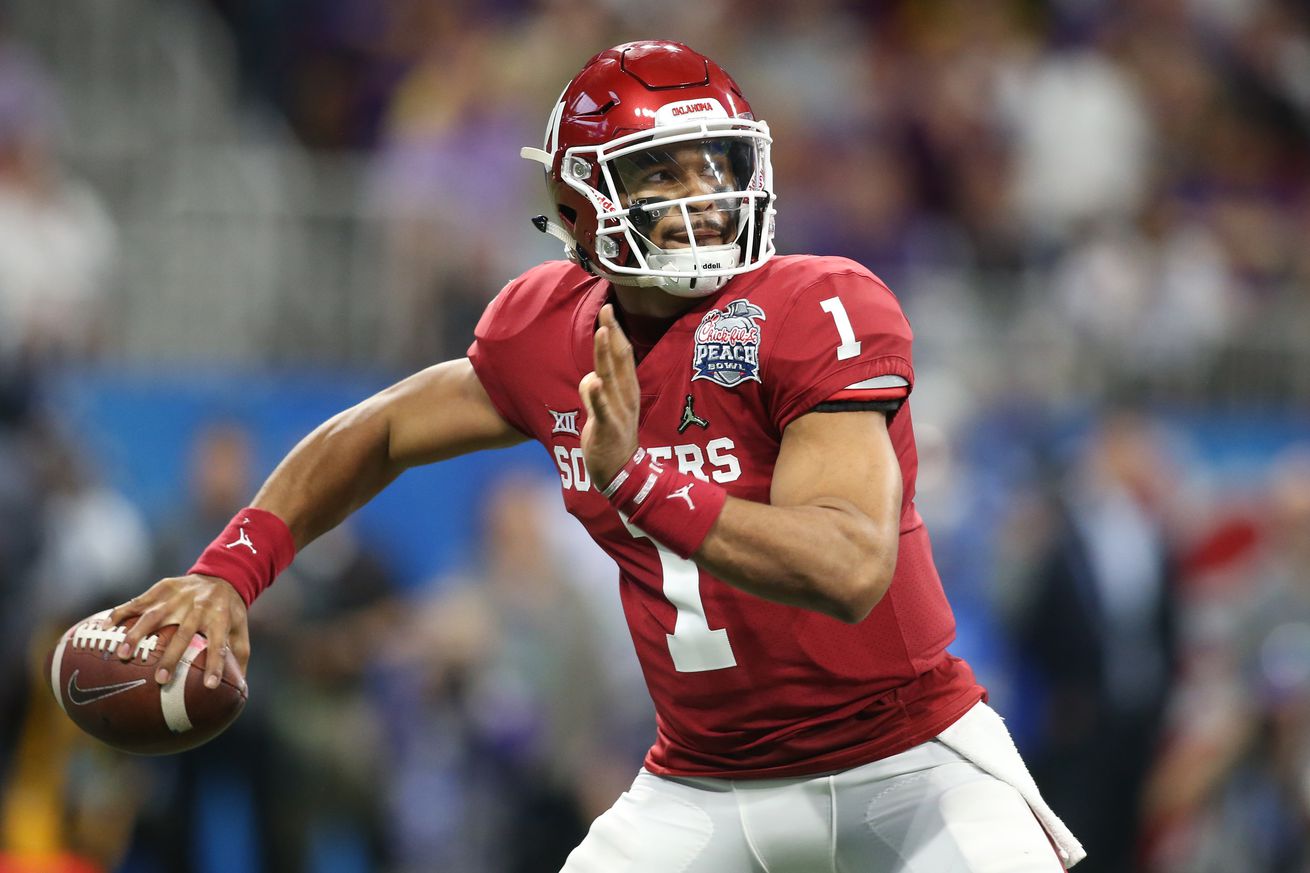 According to Bleacher Report Matt Miller’s ‘post free agency mock draft’, the Indianapolis Colts will ‘get offensive’ early in Round 2, selecting Oklahoma quarterback Jalen Hurts with the #34 pick and Notre Dame wide receiver Chase Claypool with the #44th pick respectively:

With the Sooners in 2019, Hurts became the Big 12 Offensive Newcomer of the Year, First-Team All-Big 12 member, a Big 12 Champion, and was the Heisman Trophy Runner-Up.

As a two-year starter for Alabama previously (before losing the starting job to projected Top 10 pick Tua Tagovailoa), Hurts finished his impressive Crimson Tide career—having completed 445 of 707 passes (62.9%) for 5,626 passing yards, 48 touchdowns, and 12 interceptions in 28 starts.

Hurts started 42 of 56 career games and went 38-4 as a starter playing against elite competition.

Hurts had a strong showing at the NFL Combine—demonstrating his development as a passer, while posting exceptional measurables such as a 4.59 forty time, 35.0 inch vertical, and 125.0 inch broad jump. He has the top rated SPARQ rating (which measures overall athleticism) in his draft class among quarterbacks as he’s in the 95.6% NFL percentile.

He also really impressed at his Pro Day.

Hurts’ stock is clearly on the rise, as NFL Network’s Daniel Jeremiah now has him as his 50th best prospect overall.

Previously, Stampede Blue conducted a more detailed breakdown of the possibility of Hurts to the Colts—and why it could make a whole lot of sense.

He’s been a winner his entire career and is a dynamic playmaker at the quarterback position, whose a better passer than he’s gotten credit for—and only continues to improve.

However, admittedly, Hurts needs to work on his timing and anticipation of open throws and overall progression of reads as a passer.

That being said, Hurts has shown the leadership, athleticism, and continued growth as a passer to be worthy of being the Colts developmental quarterback of the future behind veteran starter Philip Rivers for the next year or two before fully taking over the starting reins.

Chase Claypool at the 2020 NFL Combine

One is known as “Megatron” (Calvin Johnson). The other?

A ‘freak athlete’, Claypool’s SPARQ rating is in the ~98% NFL percentile, which is the third best in his wide receiver draft class:

Claypool is a physically imposing wideout with reliable hands—who can go up and win 50-50 jumpballs and make highly contested catches—having a huge catch radius.

He’s also an incredibly competitive player, who’s not afraid to mix it up after the catch or as a run blocker—with tenacity and physicality. He’ll be an immediate contributor on special teams wherever he goes.

Where he struggles is in his fluidity in-and-out of routes and tests a little bit better than his actual explosiveness on the field. He also has pretty good, but not necessarily great hands.

There’s also been some talk that Claypool could ultimately transition to tight end:

Scouts were already talking about a potential move to tight end for Notre Dame wide receiver Chase Claypool but after weighing in at 238 pounds that talk is heating up. One scout told me he’s a potential matchup nightmare for defenses. He’s a round 3 player on my board.

Watching Chase Claypool. Everything about him says Tight End.

The Colts need help at either wide receiver or tight end, so Claypool could help in either regard no matter what position he ultimately ends up as in the NFL.

Rivers could use a big bodied weapon to pair on the other side of T.Y. Hilton on the outside or even over the middle to replace the tight end production and overall red zone threat that was departed Pro Bowl tight end Eric Ebron.

With his overall athleticism, production, and competitiveness, Claypool seems like a player that Colts general manager Chris Ballard would really like—especially given his potential to be a mismatch nightmare in head coach Frank Reich’s offense:

Another big, fast playmaker that will make this WR class one for the ages… https://t.co/seIrANpP2x

Writing players always results in movement because you’re forced to put all your notes in one place. And you realize which guys you really like.

Chase Claypool and Michael Pittman won’t be top WRs for me, but I love how both play. Would want either on my team.

Here’s the other selections that Miller currently projects for the Colts later on:

Time will tell what the Colts ultimately end up doing in the upcoming NFL Draft, as fans patiently await the results.