INDIANAPOLIS, Ind. — The NFL Draft is a little over two weeks away, and for those of us who are sports starved thanks to the coronavirus, it can’t come soon enough.

The draft always brings the unexpected, but with the event going “fully virtual’’ this year to abide by social distancing guidelines, we are truly entering the unknown.

Nevertheless, the goal remains the same as teams sort through hundreds of prospects to identify the select few who can ultimately bring them a championship.

In this two-round, tradeless mock draft, I attempt to predict who each team will select by weighing team needs and past history against the best player available.

No surprises here. The Bengals take Burrow, a quarterback with excellent accuracy, poise and pocket awareness, to be the face of their franchise.

While the temptation to select Tua and move on from Dwayne Haskins is strong, defensive-minded head coach Ron Rivera won’t be able to pass up an opportunity to add a rare pass-rush talent like Young.

I dare you to find a hole in Okudah’s game. Detroit amplified their needs in the secondary when they traded away Darius Slay, and cornerback prospects don’t get any better than Okudah.

After spending top-six picks on a quarterback and running back in consecutive drafts, general manager Dave Gettleman would be wise to invest in his investments. Wills is a technician in pass protection and comes pro-ready.

Without trades, Miami can stay at five and still land their man. Tua is a master distributor who gets the ball out quickly and accurately with impeccable anticipation.

Philip Rivers’ departure signals the beginning of a new chapter in Chargers football. Herbert is the most physically gifted quarterback in this draft and has time to develop his skills while veteran Tyrod Taylor starts in 2020.

Carolina is in need of a new defensive centerpiece after the surprise retirement of linebacker Luke Kuechly. Simmons is the pinnacle of versatility and can make plays as a linebacker, safety, nickel and edge rusher.

So far this offseason, Arizona has traded for receiver DeAndre Hopkins and resigned left tackle D.J. Humphries. The effort to help quarterback Kyler Murray continues as the Cardinals draft Wirfs to man the right side.

What was once a promising unit has quickly been torn down as Jacksonville rebuilds yet again. Brown is a bully on the inside and will immediately improve the Jaguars’ run defense.

The Browns’ 2019 hype train was quickly derailed by their inability to protect Baker Mayfield. Though raw, Becton’s rare combination of size and athleticism gives him one of the highest ceilings in this draft.

The Jets have done little to help quarterback Sam Darnold after making him the third overall pick in 2018. Thomas is a day-one starter at left tackle who will allow Darnold more time to throw and create lanes for Le’Veon Bell.

Head coach Jon Gruden is still searching for his number one receiver after the Antonio Brown experiment failed. Jeudy is an advanced route runner with top-end quickness and solid hands.

With the pick they received from trading DT DeForest Buckner to Indianapolis, the 49ers give Jimmy Garoppolo another playmaker. Lamb excels at bringing down 50/50 balls and is a hellraiser after the catch.

If Tom Brady is going to bring Tampa Bay a championship at age 43, TB better protect TB. Jones’ stock has been rising since the Senior Bowl thanks to his physical traits and improved technique.

With the top tackles off the board, pairing Drew Lock’s strong arm with Ruggs’ 4.27 speed is a no-brainer. Ruggs is the perfect compliment to the big-bodied Courtland Sutton and will open things up underneath for Melvin Gordon and company.

In a cap saving move, the Falcons released veteran Desmond Trufant, compounding their need at cornerback. Henderson is an elite athlete who gives receivers fits with his length, twitch and speed.

With most of their funds allocated to the offense, Dallas will have to build up their defense through the draft. Kinlaw is an exciting defensive tackle prospect with the length, quickness and power to dominate.

Miami has been busy in free agency, but a premier pass-rusher remains a need. Chaisson is still putting it all together, but his explosive athleticism and ability to bend the edge will get him drafted high.

The Raiders continue to add talent and leadership to their young defense. Murray is a three-down linebacker with sideline-to-sideline speed and top-notch character.

Jacksonville needs reinforcements at cornerback after trading away Jalen Ramsey and A.J. Bouye. Gladney is a fiesty corner who is always in good position thanks to his quickness and anticipation.

By the season’s end, Philadelphia was plucking bodies off the street for Carson Wentz to throw to. Jefferson’s polished route running and contested catch ability will allow him to make an immediate impact.

The Vikings have a lot to replace on defense, including mainstay Everson Griffen. Epenesa is a technically skilled pass-rusher whose size and strength will compliment Danielle Hunter’s speed.

Calm down. I’m not saying Love is the next Mahomes, but his size, mobility and arm strength are comparable. With no trades, Love falls to New England, who is looking to move on after the Tom Brady divorce.

With Drew Brees returning, the Saints gear up for another Super Bowl run by adding talent to their secondary. Johnson is an ascending prospect with an enticing combination of size and athleticism.

The loss of starting corners Xavier Rhodes and Trae Waynes leaves Minnesota with holes in the secondary. Terrell fills one of those holes with above average athleticism and the length to deflect 50/50 balls.

After drafting a quarterback and pass-rusher, the Dolphins continue to address premiere positions in the first round. Jackson has the physical gifts to develop into the franchise tackle Miami needs to protect Tua. 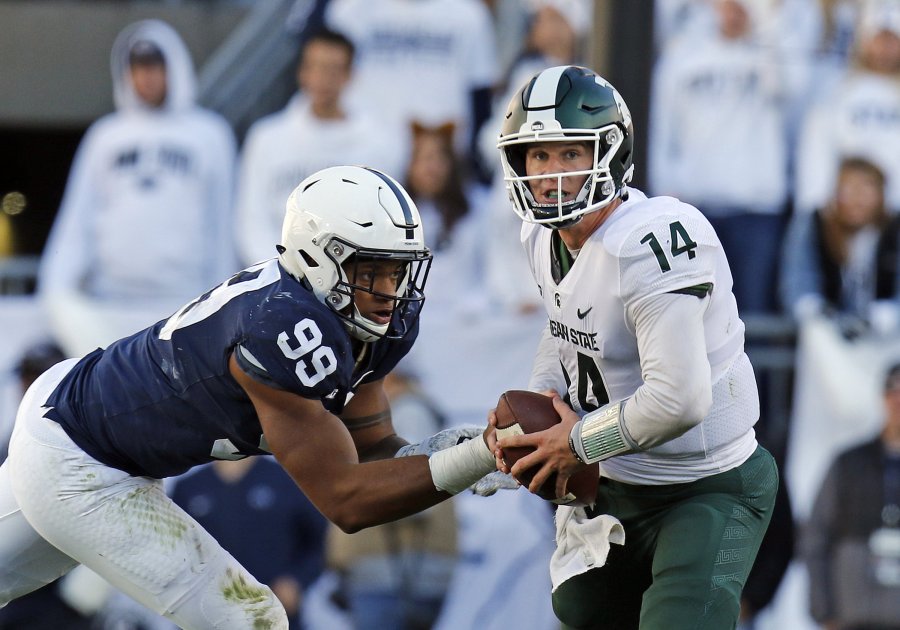 Jadaveon Clowney remains a free agent and 2019 first round pick L.J. Collier’s rookie season was not promising. Gross-Matos has the length and athleticism to develop into a double-digit sack artist. 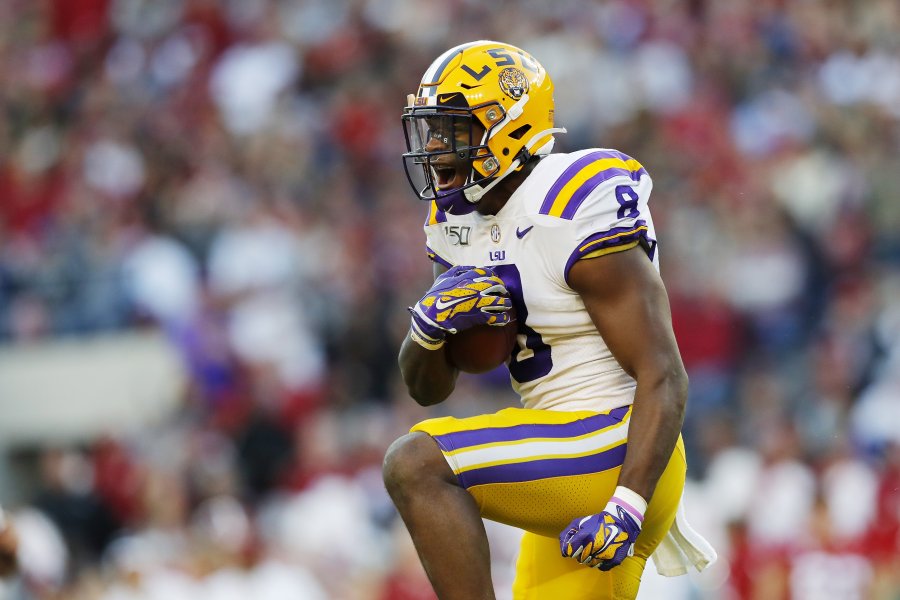 The Ravens have yet to fill the crater linebacker C.J. Mosley left when he signed elsewhere last offseason. Queen is an elite athlete with the skillset to impact all three downs. 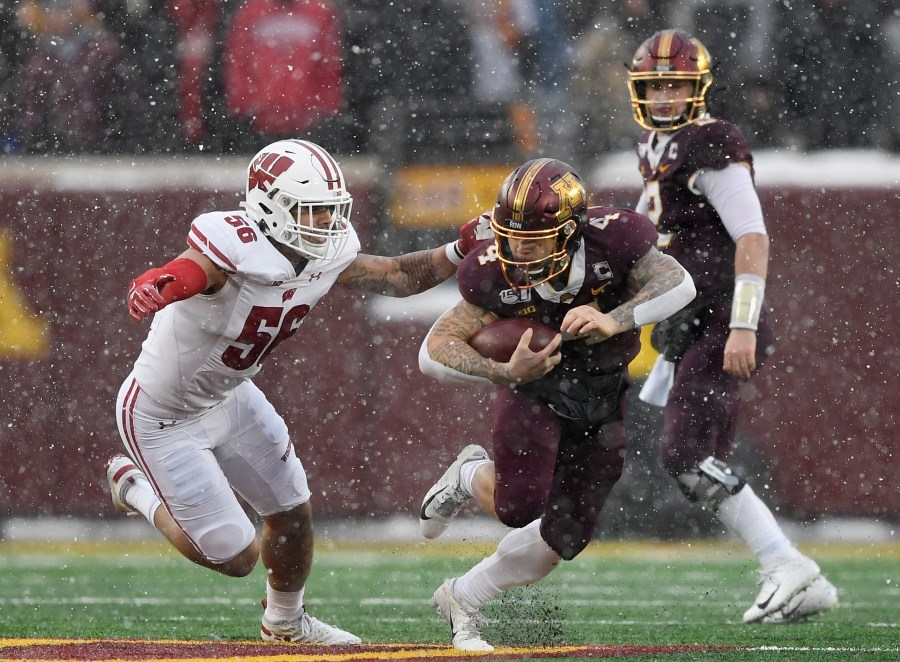 It’s easy to envision head coach Mike Vrabel falling in love with Bauns’ game. Though slightly undersized, Baun is an explosive athlete who can rush off the edge, play the run and hold up in coverage. 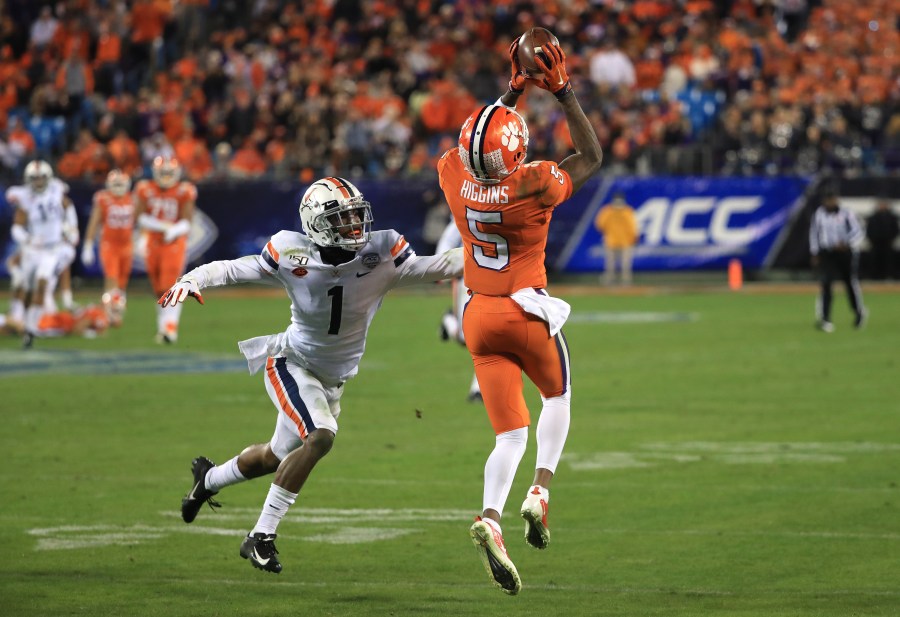 Tee Higgins #5 of the Clemson Tigers makes a catch against Nick Grant #1 of the Virginia Cavaliers during the ACC Football Championship game at Bank of America Stadium on December 07, 2019 in Charlotte, North Carolina. (Photo by Streeter Lecka/Getty Images)

Outside of Davante Adams, Aaron Rodgers didn’t have much to work with in 2019. Higgins is a jump-ball weapon with excellent size, body control and hands. 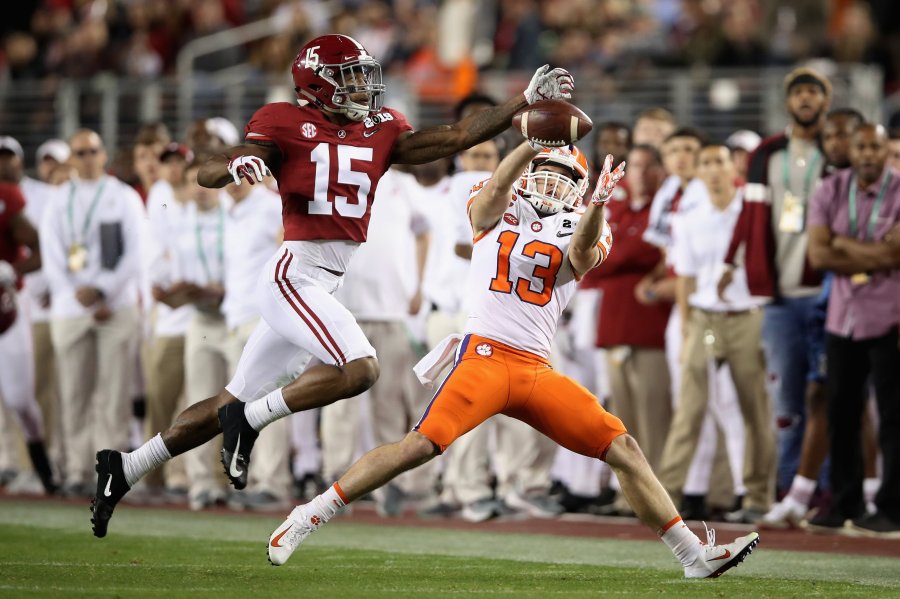 If they don’t trade this pick for additional draft capital, San Fransisco can sit and take what falls to them. McKinney is an intelligent, versatile defender who can play deep, in the box and cover the slot. 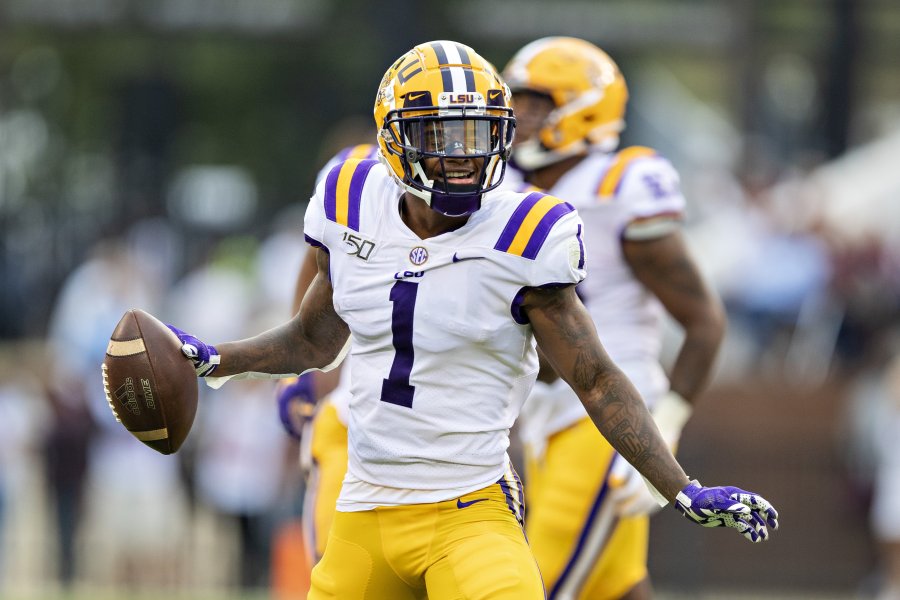 I challenge you to find a weaker group of cornerbacks than what the Chiefs currently have. Fulton battled through injury in 2019, but is a smart, competitive defender with the tools to be a solid starter.