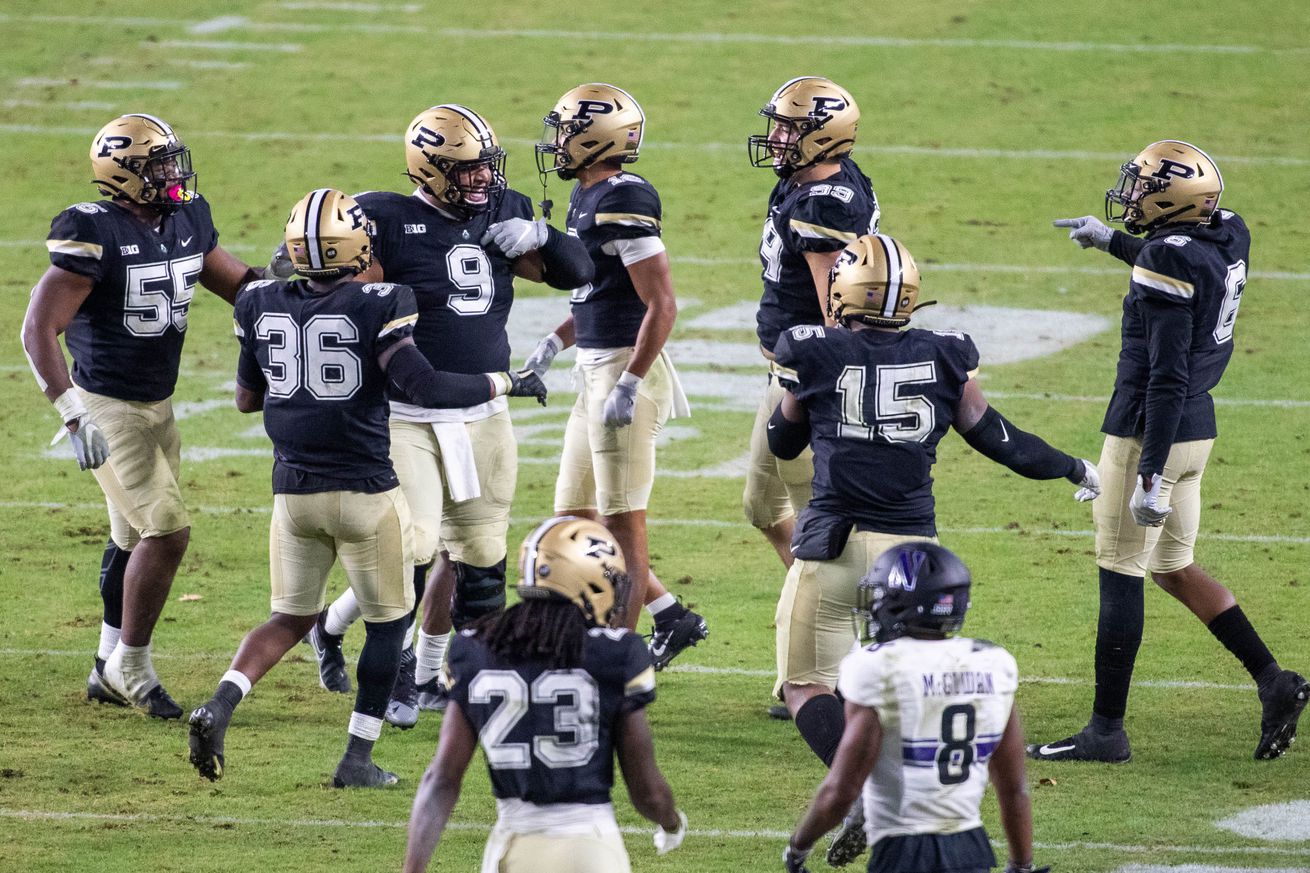 The Big Ten has a couple really good teams and some really dreadful teams.

This coming weekend we have essentially the Big Ten Semifinals. Ohio State will face Indiana, where the winner will all but wrap up the East in this truncated season. Northwestern will also face Wisconsin in a similar situation in the West. The Badgers and Buckeyes are both heavily favored to win their divisions, but Indiana and Northwestern have both shown they can be challengers.

Then there is the rest. Outside of those four there is a pretty significant gap to the rest of the league. Penn State is the one winless team, but Michigan, Illinois, Michigan State, Minnesota, Nebraska, and Maryland have had moments of looking absolutely awful. It is a weird year, indeed, and our own Boilers are still in a good spot to go 5-2 before the Champions Week.

Iowa was thoroughly dominant and did not give up a score until the closing seconds as they have not even trailed Minnesota at any point in the last four years:

When the Big Ten returned, I certainly expected the dimmer switch we have seen. It’s weird watching these games without fans and with coaches wearing their masks with inconsistent “ability.”

What I really undersold was the level of pettiness we saw in tonight’s game. Don’t get me wrong, it would absolutely STINK if Iowa was on the receiving end of either the last two games, especially last night, but it is so, so, so nice to see Kirk & company dole out what he did last night.

Is this what it felt like in the 90s when Hayden Fry told Gary Barnett, “I hope we didn’t hurt any of your guys too bad”?

Minnesota is struggling right now, only really looking good against Illinois, and now they get Purdue coming to town:

The Gophers’ All-Big Ten quarterback from a season ago hit rock bottom against Iowa. Morgan was 16-of-33 for 167 passing yards with one touchdown and two interceptions. And both interceptions were simply terrible throws. His accuracy has become an issue, and it is apparent he has far more trust in Rashod Bateman than any other receiver on the roster, which is a problem when defenses already know to key in on Bateman. Morgan has regressed significantly, and that does not reflect well on quarterbacks coach Mike Sanford Jr.

The Wildcats got it done with defense and an offensive line that manhandled Purdue’s front four:

Northwestern finally allowed points in the second half, but Mike Hankwitz’s unit yet again frustrated its opponent. Twice, the ‘Cats held Purdue to field goals in the red zone. The Boilermakers only first-half touchdown came on a fourth-and-1 from Northwestern’s 40- yard line when coach Jeff Brohm dialed up a play action pass that fooled the entire defense. That was really the only time the defense got flat out beat. Purdue’s only other end zone trip was midway through the fourth quarter when Aidan O’Connell threw a perfect ball to Milton Wright.

The unit missed some tackles, and there were periods when the pass rush went stagnant. Generally speaking, though, all three levels of the defense were great against a potent offense, forcing another turnover that led to points.

The Hoosiers are really, really good and they now have their own “Prove it” moment with Ohio State coming to Bloomington. If fans were allowed this would be the biggest game in decades there, probably since the 1967 Purdue game. They toyed with Michigan State:

Once again, Indiana’s defense paved the path to victory. This isn’t the first time in Tom Allen’s IU coaching tenure that we’ve seen a strong and, at times, overwhelming defensive group, but it’s certainly a sight to behold.

The Hoosiers’ penchant for takeaways have earned the headlines so far this fall, and rightfully so. Indiana was right back at it again on Saturday, finishing with three interceptions and one fumble recovery. IU made the most of those moments, too, scoring 20 points off of turnovers and seizing upon Michigan State’s habitual sloppiness.

The Spartans did nothing behind Rocky Lombardi and aside from the Michigan game, have been dreadful:

Michigan State fans got their first real glimpse at Payton Thorne on Saturday. Thorne saw some limited action against Iowa, but only threw one pass that fell incomplete. But, after Rocky Lombardi was pulled out late in the first half, Thorne stepped in to take control of the offense and immediately made an impact, taking a read option and slicing through the Indiana defense for 38 yards, showing off his speed and agility in the process.

Through the game, Thorne showed lots of promise as the Spartans’ quarterback. He never managed to finish drives, but in his first real action of his career, plus playing against such a talented defense, Thorne gave the Spartans just a little bit of life for their offense. The offense continued to make mistakes through the rest of the game with penalties and easy sacks, but Thorne flashed his potential.

I don’t think there is much doubt Wisconsin would have kept its streak going against Purdue had the game been played, as the Badgers rolled Michigan:

With a number of key players unable to participate on Saturday due to injury and/or COVID-19 protocols, the Badgers were forced to turn to some younger players to perform.

And boy did they.

At running back, the absence of Garrett Groshek and Isaac Guerendo meant more opportunities for true freshman Jalen Berger. The former 4-star recruit out of New Jersey was a huge win on the recruiting trail last spring, and he dazzled in his first action of the season. A smooth runner that also displayed his pass catching ability on Saturday, Berger led the team with 100 all-purpose yards. The young ball carrier also led the team in carries with 15 and netted 87 yards on the ground, including a pretty 23-yard touchdown run. It is unclear how much he will factor into the rotation once both of the upperclassmen return, but Berger definitely appears to have the talent to add something to the room.

In Ann Arbor things are turning sour against Jim Harbaugh, who has not been able to deliver on his high expectations:

We’ve heard from players and coaches the past week, saying some of the mistakes on defense and offense are quick fixes. That isn’t the case on defense. The unit has been abused via the air the past couple weeks, but tonight most of the damage came on the ground. The Badgers racked up 341 yards rushing. The defense played tentative, lacked physicality, and often allowed gaping holes for ball carriers which led to big gains. Defensive coordinator Don Brown always says to put it on him and not the players, and the bottom line is Brown isn’t doing a good job of getting these players prepared. Players can take ownership as well, they have to want to succeed. It’s not that the players don’t want to succeed, but they’re not playing with enough energy on a down-to-down basis and are getting whooped in the process. To be fair, the offense hasn’t helped them out any, especially to start the game, but it’s clear there’s no quick fix on this side of the ball. Tonight wasn’t even about scheme, it was about one team playing much more physical and fast than the other.

The Cornhuskers wanted nothing but football for months and on Saturday they were able to deliver a win despite giving up 500 yards of offense:

In other words, they simply needed a win. “The state needed it. The team needed it. I needed it,” Frost said after the game. They needed this win because sometimes you need to be rewarded for all the work you put into the game. The win was the reward.

The Nittany Lions are now 0-4 and have not looked good in doing so. Could they have a winless season?

I’ve seen a lot of heat so far this season on Kirk Ciarrocca and, honestly, most of it I don’t understand. After watching back the Maryland and Indiana games, Ciarrocca regularly called and designed plays that left open wide receivers or a numbers advantage in the running game. Penn State’s problem has been those receiver either not being seen, being over throw, or the running lanes not being blocked correctly. We saw when Levis came in and the ground game got going that the offense can move the ball. Even on the third down QB draw in the red zone with a little over a minute to go in the third quarter, Levis had acres of space to walk in had he seen the right hole.

Sometimes the best games are when two bad teams end up playing a competitive game against each other. The Illini are just elated with a win a week after getting drilled by Minnesota:

After almost 16 quarters of play in the 2020 season, the Illini have now secured their first lead and win of the year.

A Nate Hobbs interception, the Illini’s third takeaway of the game, led to James McCourt booting a 47-yard field goal through the uprights for the win.

Isaiah Williams has led the Illini back from behind. After a few tough drives early, Williams got into a rhythm with his legs and led Illinois to four scoring drives in the second half — would be six if James McCourt did not miss two field goals.

The Scarlet Knights still have a way to go, but they are clearly improving:

Saturday’s loss to Illinois pulled at the heartstrings of Rutgers fans and ultimately ended with a kick to the gut when James McCourt drilled a game winning 47 yard field goal with 3 seconds left in the game. After being favored in a Big Ten game for the first time since the 2014 season with a chance to improve to 2-2 ahead of a prime time game next weekend against Michigan, the Scarlet Knights couldn’t deliver. Across social media, message boards and even in the comment section of this website, the familiar self pitying moan of “same old Rutgers” made it’s first appearance this fall. Some comments yielded even harsher assessments.